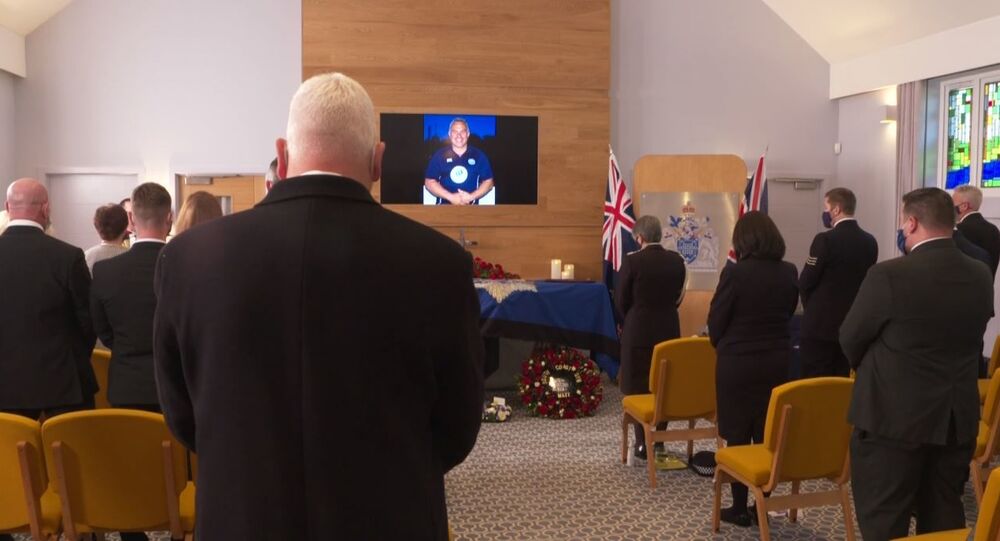 Sergeant Matt Ratana died in hospital after being shot as a handcuffed suspect who was being checked in at Croydon Custody Centre last month. UK Prime Minister Boris Johnson expressed his “deepest condolences” to the family after his death.

The funeral has taken place of Sergeant Matt Ratana, 54, who was gunned down while booking a 23-year-old suspect into custody at a south London police station last month.

Louis De Zoysa is still in hospital, suffering from gunshot injuries which have reportedly left him paralysed and brain damaged.

​Sergeant Ratana was born in New Zealand and that country’s prime minister, Jacinda Ardern, told his colleagues in the Metropolitan Police “we share your sorrow.”

Commissioner Cressida Dick, the head of the Met, said at his funeral on Wednesday, 4 November: "Matt was a great police officer, he was a brilliant sergeant and he was a lovely man."

© AP Photo / Kirsty Wigglesworth
A tribute to Sergeant Matt Ratana, who was shot dead at a police station

She said: "He was loved in the Met and by the public that we work with…He was a truly skilled, very professional, very capable police officer and it’s a huge loss."

Britain is due to enter a second lockdown on Thursday, 5 November, and Ms Dick said: "Because of COVID, we can’t have the normal big force funeral that so many colleagues here and around the country and beyond, would expect in such tragic circumstances, where police officers and members of the public turn out to pay their respects in large numbers."

​She said the funeral had been planned, in a COVID-compliant way, along with his girlfriend, Su Bushby.

Sgt Ratana’s friend, Debra Hajek, read a poem and then a tribute from Ms Bushby was read by her friend Lorraine Dray.

Ms Dick said they planned to hold a proper memorial service with hundreds of his police colleagues in attendance when the pandemic was over.

​She said: "It was very striking that after Matt was killed, so many of the public - both where he had worked in Croydon and in Hackney - and across London, people who had come across him in his work wanted to contact us or his partner and family, to say how they had found him to be such an excellent, kind, caring and capable police officer."

Sgt Ratana left behind a son, Luke, 26, who serves in the New Zealand Navy.

Sgt Ratana’s killer was reportedly arrested on suspicion of possessing ammunition and Class B drugs and was being searched when he pulled out the gun and shot the officer.