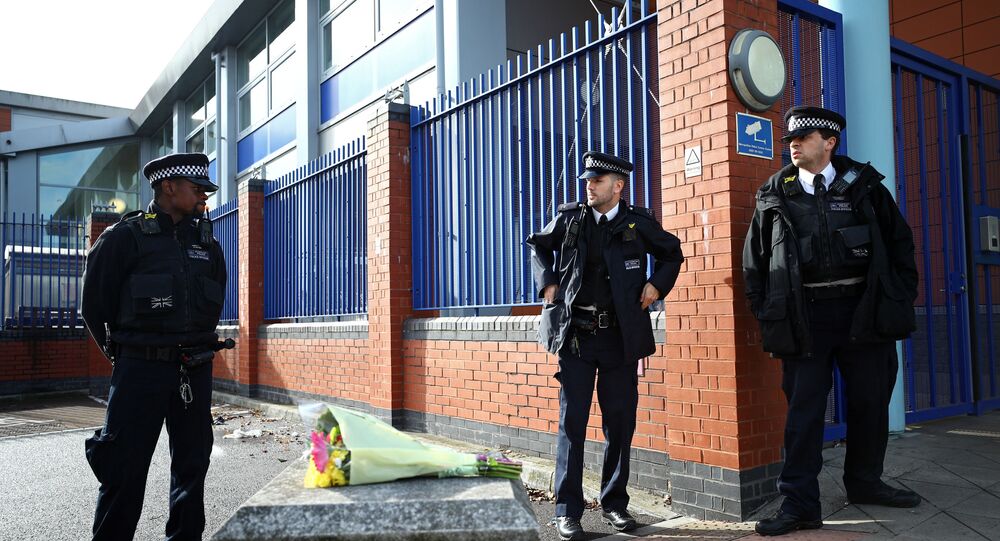 At 2.15am on Friday 25 September a police officer was shot dead by a man inside a custody centre in Croydon, south London. Police officers across Britain have reacted with anger and sadness to the latest death in uniform.

A 23-year-old man has been taken into custody after a police officer was shot and killed in a south London police station.

The latest victim - who has not yet been identified - joins an illustrious list of officers who died in high profile cases.

Watch behind Martin Brunt at the two Londoners paying their respects. They, not the activists and the dividers, represent our city, my city - and the one that will win out. pic.twitter.com/LcQyVsCw4Q

In August 2019 PC Andrew Harper, 28, died after being dragged by a car for a mile down a country lane in Berkshire, west of London, as he tried to stop a gang of teenagers stealing a quad bike.

​Henry Long, 19, Albert Bowers and Jessie Cole, both 18, were convicted of manslaughter, rather than murder. Long was jailed for 16 years and the other two for 13 years each.

PC Harper’s incensed widow, Lissie, wrote to the prime minister claiming “justice is a joke” and has campaigned for life sentences for those who kill police officers and other emergency workers.

On 22 March 2017 Khalid Masood, 52, drove a rented car into pedestrians  on Westminster Bridge before crashing into the gates of the Palace of Westminster and stabbing PC Keith Palmer, who was guarding the Houses of Parliament. 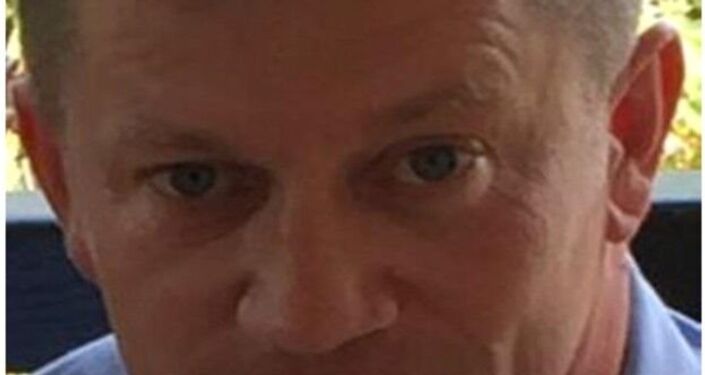 © Photo : Metropolitan Police
PC Keith Palmer, who was stabbed to death at the Palace of Westminster by Khalid Masood

Masood, an Islamic extremist, was then shot dead by another police officer.

Earlier this year it was reported that PC Palmer’s widow Michelle was suing the Metropolitan Police for failing to protect him.

She claims PC Palmer would still be alive if armed officers had stationed with him at the Carriage Gates, rather than having to run 80 yards from where they were positioned, while he was being attacked.

In September 2012 Dale Cregan, a notorious Manchester criminal was on the run after killing two gangland rivals - Mark Short and his father David.

​Cregan - who had lost an eye during a fight in Thailand - was holed up at a house in the village of Mottram in Longendale with a Glock pistol and a cache of Serbian hand grenades.

Cregan made a bogus 999 call, claiming there had been a burglary, and when PC Fiona Bone, 32, and PC Nicola Hughes, 23, turned up at the house he fired 32 shots and hurled a grenade, killing both, before fleeing.

Then prime minister David Cameron described it as a "despicable act of pure evil."

Cregan, 29, was later caught and jailed for life without the possibility of parole.

In November 2005 PC Sharon Beshenivsky, 38, and her partner, PC Teresa Milburn, responded to reports of a robbery taking place at a travel agency in Bradford, West Yorkshire.

​PC Beshenivsky, who had three children and had only been an officer for nine months, was shot in the chest by one of the robbers and died instantly. PC Milburn was also shot but survived.

Four men - Mustaf Jama, Yusuf Jama, Muzzaker Shah and Faisal Razzaq - were jailed for life for her murder while Hassan Razzaq was given 20 years for manslaughter.

Earlier this year the alleged mastermind behind the robbery Piran Ditta Khan, 71, was arrested in Islamabad, Pakistan. He is facing extradition to the UK.

In January 2003 Detective Constable Stephen Oake, 40, the son of a retired chief constable, was stabbed to death during an anti-terrorist raid in Crumpsall, Manchester.

His Algerian killer, Kamel Bourgass, was jailed for life in June 2004.

Bourgass, who was said to be an agent of al-Qaeda, was said to have been involved in a conspiracy to poison hundreds with ricin, a toxin which can be distilled from castor oil beans.

Detective Constable Jim Morrison, 26, was off duty on 13 December 1991 when he spotted a man stealing a handbag and running away in the West End of London.

​He chased the thief, who stabbed him outside the Indian High Commission in Aldwych before running off.

The murder remains unsolved. The suspect was in his late 20s and believed to be from the Maghreb region of Africa.

In the 1980s there were several violent riots in Britain’s inner cities by mobs of mainly Afro-Caribbean youths angered by police brutality.

In September 1985 riots broke out in Brixton, south London, after a black woman was accidentally shot dead by police. A week later, on 6 October, more disorder broke out in north London after Cynthia Jarrett died of a heart attack during a police search of her home.

​The rioting was at its worst on the notorious Broadwater Farm estate and when PC Keith Blakelock fell, he was hacked to death with machetes and knives.

Three men - including Winston Silcott - were convicted of his murder but later cleared on appeal.

In 2014 another man, Nicky Jacobs, 45, was found not guilty of PC Blakelock’s murder, which remains unsolved.

Yvonne Fletcher, 25, was on duty in St James’s Square in central London on 17 April 1984 when she was shot by a Sterling sub-machine gun fired from a window of the Libyan People’s Bureau, the de facto embassy.

Moving moment as colleagues Of the officer who was shot dead in Croydon came to offer their condolences. pic.twitter.com/ezf4YhwC2E

​The gunman is believed to have been aiming at crowds of Libyan dissidents who were protesting against the regime of General Muammar Gaddafi and accidentally struck WPC Fletcher, who was among officers keeping the demonstration under control.

The shooting led to a huge diplomatic incident between Britain and Libya.

The embassy was besieged for nine days but eventually all those inside - who were covered by diplomatic immunity - were evacuated and sent back to Libya.

WPC Fletcher’s killer has never been identified but one of the prime suspects,  Abdulqadir al-Baghdadi, was found dead at his home in Tripoli after the fall of Gaddafi in 2011.

On 26 January 1984 Detective Constable John Fordham was carrying out surveillance on Kenny Noye, who was suspected of being involved in the £26 million Brink’s Mat robbery which had taken place near Heathrow airport two months earlier.

Noye confronted DC Fordham, who was in plain clothes, in his garden and stabbed him to death.

​Noye was acquitted on the grounds of self-defence but in 1996 he stabbed to death motorist Stephen Cameron in a road rage incident on the M25 motorway. He fled to Spain, was caught, extradited back to England and jailed for life.

In the early 1980s the Provisional IRA was embarked on a bombing campaign in London.

On 26 October 1981 a booby-trapped bomb was discovered in the toilet of a Wimpy burger restaurant in Oxford Street, central London.

Kenneth Howorth, 49, who had been in the army for 23 years, was employed by the Metropolitan Police as a bomb disposal officer.

He was killed when the device exploded as he tried to deactivate it.

Stephen Tibble, who was only 21, was off-duty when he spotted a man being chased by police officers in Hammersmith, west London in February 1975.

He got off his motorbike and spreadeagled himself in a bid to block the suspect, who pulled out a gun and shot him.

Horrific to hear of a police officer being shot and killed in Croydon.

Our police put themselves in harm's way every day to keep us safe.

All my thoughts are with the officer’s family, friends and colleagues.

​The suspect turned out to be Liam Quinn, a California-born member of the Provisional IRA who was wanted in connection with bombings in the capital.

Quinn fled to the US but was extradited to England in 1988 and served 11 years of a life sentence before being freed under the terms of the Good Friday Agreement.

On 12 August 1966 - a few days after England won the World Cup Final - three police officers were shot dead by a gang of criminals in a street in Shepherd’s Bush, west London, only yards from Wormwood Scrubs prison.

On 2 November 1952 Derek Bentley, 19, and Christopher Craig, 16, were burgling a warehouse in Croydon, south London, when neighbours alerted the police.

When PC Sidney Miles confronted the pair on the roof of the warehouse Bentley uttered the immortal words: “Let him have it.”

​Craig fired his gun, killing PC Miles. The prosecutors claimed the ambiguous phrase was an exhortation for Craig to shoot.

Craig was convicted of murder but because of his age spent only 10 years in prison and was released in 1963.

Bentley, on the other hand, was executed in January 1953.

More than 40 years after his death he was granted a royal pardon after a long campaign by his family and other supporters.

In the winter of 1910/1911 a gang of Latvian revolutionaries caused chaos on the streets of east London.

After a robbery in Houndsditch on 17 December 1910 one of the gang, George Gardstein, shot dead  Sergeant Charles Tucker, PC Walter Choat and PC Robert Bentley.

The Metropolitan Police launched a manhunt for the killers and eventually tracked them down to a terraced house in Sidney Street.

On 3 January 1911 the heavily armed revolutionaries got involved in a firefight with the police. The then Home Secretary, Winston Churchill, even turned up at the scene.

Eventually the house caught fire and the gang, refusing to come out, burned to death.