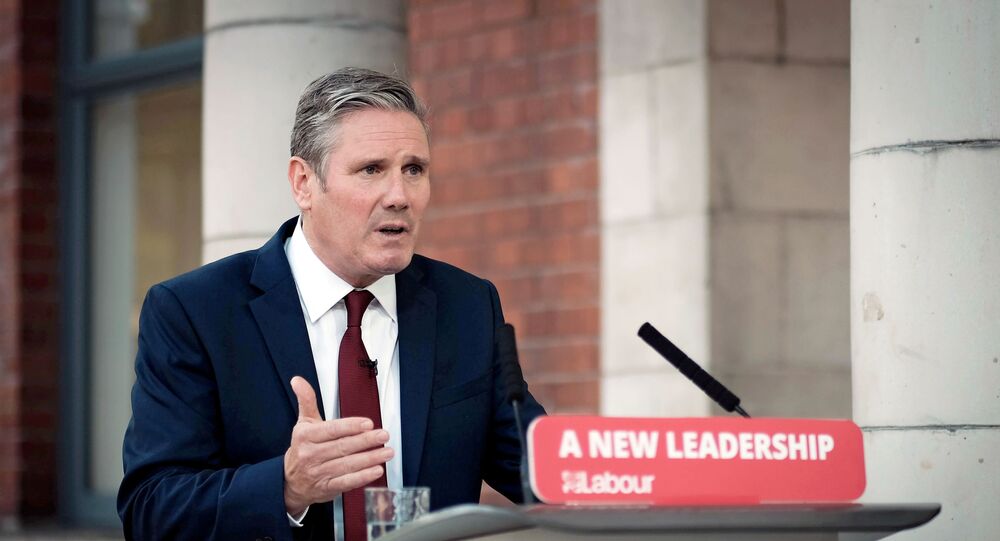 Labour Leader Sir Keir Starmer threw down the gauntlet to supporters of his predecessor Jeremy Corbyn on Thursday, saying they were as bad as anti-Semites and should be "nowhere near" the party. But Unite union leader Len McCluskey warned Corbyn's suspension would "split" the party.

Labour Leader Sir Keir Starmer has insisted he is not looking for a "civil war" in the party, less than 24 hours after his unprecedented suspension of his left-wing predecessor Jeremy Corbyn.

Starmer’s comments on Friday morning's BBC Radio 4’s Today programme came a day after he suspended former leader Corbyn from the party and withdrew the Parliamentary whip over his comments on the Equalities and Human Rights Commission (EHRC) report into allegations of anti-Semitism in the party.

“I don’t want a civil war in the Labour Party. I don’t think there’s any need for one," Starmer told host Mishal Husain. "I want to unite the party, but I’m not going to renege on my commitment to root out antisemitism.”

Corbyn's shock suspension followed his insistence that “the scale of the problem was also dramatically overstated for political reasons by our opponents.” He later stressed in a tweet that it was wrong to deny there was a problem with anti-Semitism in Labour.

Labour-affiliated super-union Unite General Secretary Len McCluskey called Corbyn's suspension a "gross injustice" on Thursday and warned of "chaos" in the party and electoral defeat as a result.

"This was a day for our party to move forward as one to defeat the evil of anti-Semitism. However, the decision to suspend Jeremy Corbyn has threatened that opportunity," McCluskey said.

"But it is also an act of grave injustice which, if not reversed, will create chaos within the party and in doing so compromise Labour’s chances of a general election victory. A split party will be doomed to defeat."

The new Labour leader claimed on Today that he had briefed his former boss on Wednesday night on how he would respond to the report from the public body - which found the party responsible for 'unlawful acts' - adding that he was "deeply disappointed" by Corbyn's response.

“And from discussions yesterday morning, I’m in no doubt that Jeremy Corbyn and his team knew exactly what I was going to say in my response about not only anti-Semitism but the denial and the arguments about exaggeration,” Starmer insisted.

Starmer threw down the gauntlet to Corbyn's supporters and the Labour left in his statement on Thursday, urging them to leave the party and equating them with anti-Semites.

"If... there are still those who think there’s no problem with antisemitism in the Labour Party, that it’s all exaggerated, or a factional attack, Frankly, you are part of the problem too. And you should be nowhere near the Labour Party either.” Starmer said.

Key Corbyn ally John McDonnell MP, who served as shadow chancellor under his leadership, urged left-wingers to stay in the party and fight his suspension.

But on Friday he tweeted that Labour was heading for "a hell of a row" over the new leadership's "overreaction".

Corbyn could be expelled from the party under the disciplinary process following his suspension - a sanction with just one extraordinary precedent in Labour's 114-year history. The only other former Labour leader ever expelled from party was Ramsay McDonald, who split the party in 1931 when he entered into the 'National Government' with the Conservatives and Liberals during the Great Depression.

And Starmer could simply sabotage 71-year-old Corbyn's chances of holding onto to his Islington North seat by keeping the whip withdrawn until the next general election, thereby forcing his Constituency Labour Party to select another candidate. That was the fate of Corbyn ally Chris Williamson, who lost his Derby North seat last year after was suspended for saying Labour had been "too apologetic" when it had "done more to address the scourge of anti-Semitism than any other political party."

© AP Photo / Kirsty Wigglesworth
Labour Leader Sacks Corbynite Rebecca Long-Bailey for Sharing 'Anti-Semitic' Conspiracy Theory
​Meanwhile the Labour Party machine clamped down on debate over the EHRC report, the LabourList website reported. General Secretary David Evans emailed all branch secretaries and chairs warning them not to allow motions that “question the competence of the EHRC to conduct the investigation” or which “repudiate or reject the report or any of its recommendations” at their meetings.

Evans added that branch social media pages that normally allow discussion should be “closely moderated” or have access “temporarily suspended”.

Starmer took over from Corbyn in April following the party leadership contest that was prompted by Corbyn's resignation - in the wake of Labour's defeat in the December 2019 general election to Prime Minister Boris Johnson's pro-Brexit Tories.