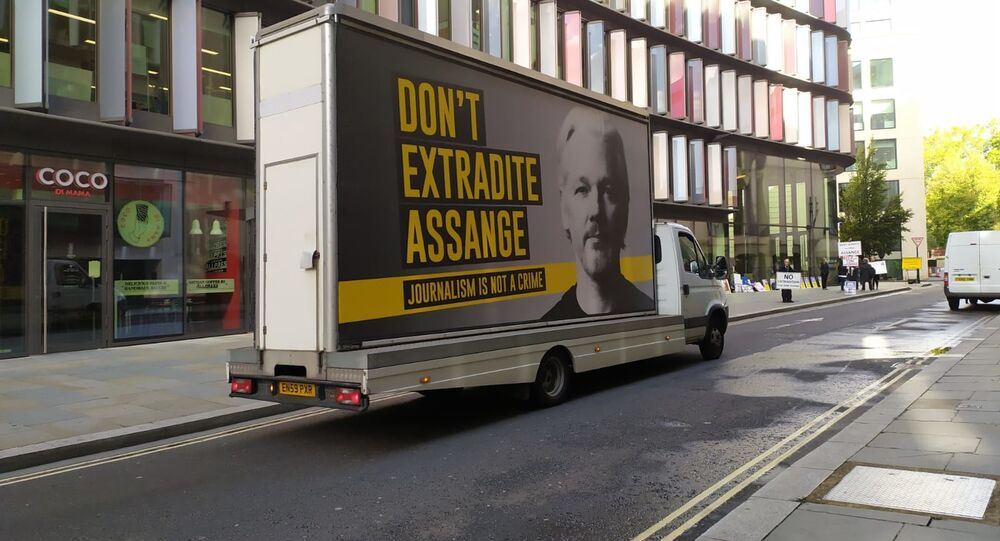 A psychiatrist testifying for the government says that whilst the WikiLeaks publisher is suffering from mild clinical depression he does not think he is a suicide risk if he is extradited to the United States to face espionage charges.

A psychiatrist testifying for the US government in the extradition case of Julian Assange told the Old Bailey on 24 September 2020 that in his assessment the WikiLeaks publisher "would be able to resist any suicidal impulse" were he to be sent to the United States.

During the examination-in-chief conducted by James Lewis QC, for the prosecution, Dr Nigel Blackwood, Consultant Forensic Psychiatrist with the NHS, explained that he saw Mr Assange in April 2020, in Belmarsh maximum-security prison. The doctor thought Mr Assange was "moderately depressed", in the clinical sense, though a review of his most recent medical records from Belmarsh leads him to believe that there is some improvement of his state of mind.

Dr Blackwood did not think Mr Assange suffered from a "severe depressive disorder with psychotic symptoms" in November 2019, though he had not himself evaluated Mr Assange at that time and relied in his assessment on other observations made by the prison staff. The doctor, who consults with inmates at Wandsworth prison, notes some risk of suicide but that risk has been very carefully managed in Belmarsh, and the publisher engages closely with treatments to manage that risk. He believes Mr Assange retains the capacity to resist suicide, the court heard.

​Dr Blackwood says that he disputes that Mr Assange "was at the very severest end of the spectrum" and complains that Professor Michael Kopelman, a defence expert, "did not recognise" that if the treating physician at Belmarsh would have been bound to refer Mr Assange to a secure unit and that that did not occur.

Defence experts told the court earlier in the week that that they believed the risk that Mr Assange may commit suicide if extradited is "high" or even "very high".

© Sputnik . Screenshot
Assange is at 'Very High Risk of Suicide' Should Extradition Occur, Neuropsychiatrist Tells Court
Dr Blackwood explained that a person's description of their own mood and mental state "will definitely be coloured" by their personality and own perspective. He thinks Mr Assange may have had a self-dramatising or hyperbolic approach to describing the symptoms and insisted that one must look very clearly at the psychological records

Dr Blackwood also told the court that he has "anxieties" about making an autism diagnosis in a 49-year-old man where there has been no such diagnosis historically, despite Mr Assange's contact with the medical community earlier in his life.

Dr Quinton Deeley, who specialises in treating people with autism, informed the court on Wednesday that he believed Mr Assange has the characteristics of someone who is highly intelligent and falls within the "high-functioning" end of the autism spectrum. The doctor explained that his condition meant that Mr Assange's obsessive traits increase his vulnerability to attempting suicide should he be extradited and should he face solitary confinement or even an effective life sentence, should he be convicted.

© Photo : Mohamed Elmaazi
Julian Assange is on the 'High-Functioning' End of the Autism Spectrum, Expert Tells Old Bailey
Dr Blackwood, who is not an expert in autism but has treated prisoners with the condition, says that although Mr Assange exhibits traits of the disorder he doesn't think Mr Assange "goes over the categorical line". "Even if he does get into that diagnostic spectrum" Dr Blackwood believes Mr Assange would be "at the very mild end".

He also added that he expects there to be "broad equivalence" in terms of medication and something akin to what Mr Assange has "engaged with well in Belmarsh" prison in the UK", in so far as the US prison system is concerned.

Dr Blackwood's report to the court takes as fact that "there is no solitary confinement" in the Adult Detention Center in Alexandria, Virginia, where the parties agree Mr Assange would likely be held. During cross-examination by the defence Dr Blackwood admitted that this statement was based entirely on statements from Assistant US Attorney Gordon Kromberg.

Blackwood says he was led to believe by AUSA Kromberg that prisoners are not held in administrative segregation at Alexandria Detention, VA.

Expert witness essentially admits he took the prosecution's word there will be no solitary lol pic.twitter.com/OrZa1sTx43

​Mr Kromberg is the ASUA in the Eastern District of Virginia which is where Mr Assange would face a trial should he be extradited.

Mr Fitzgerald put to Dr Blackwood a description of what prisoners in the ADC facility in Virginia can expect to face, especially when under Special Administrative Measures (SAMs), and asked him to comment as to the impact on Mr Assange's depressive state Dr Blackwood responded "Yes, this has the potential to impact upon Mr Assange's mood state", but strongly insisted that Mr Assange's mood is modifiable and treatable and that the description of the ADC in Virginia that was put to him is "at the most pessimistic end".

"I think we have to bear in mind that Mr Assange has proved himself to be a very resilient man and very resourceful man" the doctor said, adding that predictions which have apparently been made, such as Mr Assange's inability to assist in his own defence, have not come to pass

When asked by Ed Fitzgerald QC why Dr Blackwood hadn't mentioned in his report that there was evidence that detainees face isolation at the ADC facility he repeated that he had replied upon Mr Kromberg's statement.

The doctor also said in his report that he assessed that it would not be "unjust" for Mr Assange to be extradited. Mr Fitzgerald demanded to know why he had made such a judgement in his report, which should be the purview of the judge in this case, Dr Blackwood - recognising that it is ultimately up to the judge - said he was addressing matters that were put to him by the government.

Fitzgerald very strongly objected to Blackwood's decision to include in his report for the court a statement that extradition would not be "unjust on mental health grounds." He believes it's not Blackwood's place to say but for judge to decide. #AssangeTrial

Mr Assange's extradition hearings will continue for a fourth week with final submissions currently expected to be heard at the beginning of the fifth week, despite a request from the defence for a one month adjournment to prepare closing arguments.

Mr Assange faces to up to 175 years in prison if he is convicted of all of the charges levied against him in the US. The indictment almost entirely relates to his role in publishing the Iraq and Afghanistan war logs, Guantanamo Bay detainee files and diplomatic cables that revealed war crimes as well as other criminality and abuse committed by the US government and US-backed forces around the world.