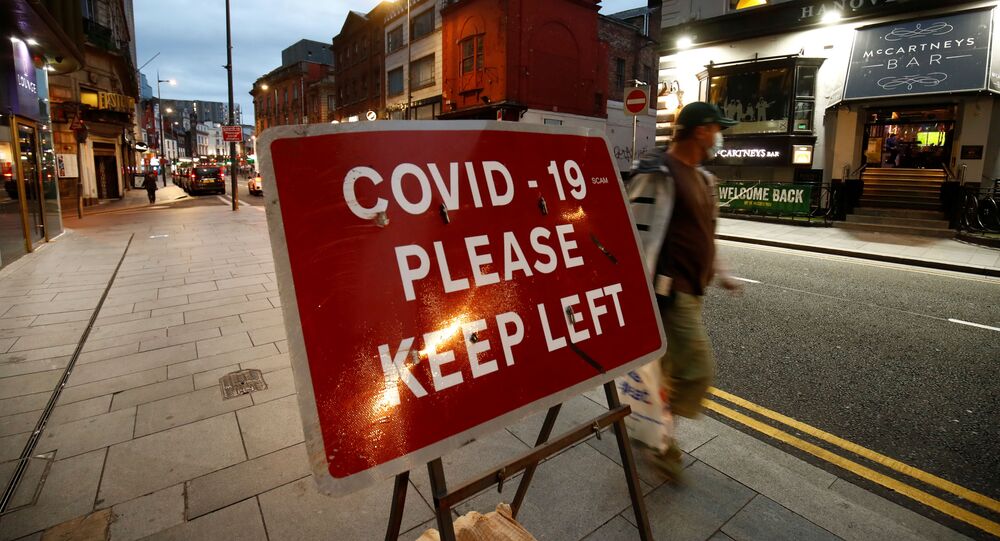 On Tuesday, Prime Minister Boris Johnson announced new restrictions in England for the next six months. The measures include extended requirements to wear face masks, higher fines for not wearing masks or gathering in groups of more than six, restricted hours for pubs, bars and restaurants, and many others.

British Foreign Secretary Dominic Raab said on Wednesday that the cabinet can't rule out a full second lockdown amid the increase in the number of new cases in the country.

He also criticised some opposition politicians for "scaremongering" after the Prime Minister talked about the Army helping the police amid the pandemic.

"If they can relieve any capacity for the police... they'll be there to do that," the foreign secretary said.

Raab explained that heftier fines are designed to crack down on those who still break the coronavirus-related rules. According to him, people should not be allowed to "blow it" for those who have been acting responsibly throughout the pandemic.

The foreign secretary clarified that there is "no silver bullet" for dealing with COVID-19, and the UK government is learning lessons from what's happened recently in other European countries, which were successful in curbing a rise in cases.

"If everyone now pulls together, as we saw at the peak of the virus, we'll get through these winter months and there's light at the end of the tunnel as we go into next year", Raab added.

New Measures to Stop the Virus

During his address to Parliament on Tuesday, Prime Minister Boris Johnson announced that new coronavirus-related restrictions would be introduced in England.

Johnson stressed that the current restrictions are "by no means a return to the full lockdown of March", stating that the country is better prepared for a second wave of the COVID-19 pandemic.

The PM once more said that people should work from home, if possible.

"We will extend the requirement to wear face coverings to include staff in retail, all users of taxis and private hire vehicles and staff and customers in indoor hospitality, except when seated at the table to eat," Johnson also said.

Pubs, bars and restaurants were ordered to close at 10:00 pm across England, with restaurants switching to table service only.

"This is the moment we must act. We're acting on the principle that a stitch in time, saves nine", Johnson told the parliament.

The prime minister said the measures, which could be in place for up to six months, would be bolstered by greater fines for violations, a boosted police presence and potentially a military back-up.

Labour Party leader Keir Starmer expressed support for the restrictive measures but criticised the government for not having a clear strategy and allegedly losing its grip on the crisis.

Wales and Scotland also announced severe restrictions, with Scottish First Minister Sturgeon saying the move was "the only responsible decision we can reach" as the country experiences a rise in the new coronavirus cases.

At the moment, Britons have to follow the "rule of six", which bans all events with seven people or more from gathering in the same place, with several exceptions for funerals, weddings, receptions, wakes, etc.

Britain has faced a major surge in the number of new cases, as the country confirmed over 400,000 COVID-19 cases, while the death toll approached 42,000, which is the fifth-highest in the world and the highest in Europe.