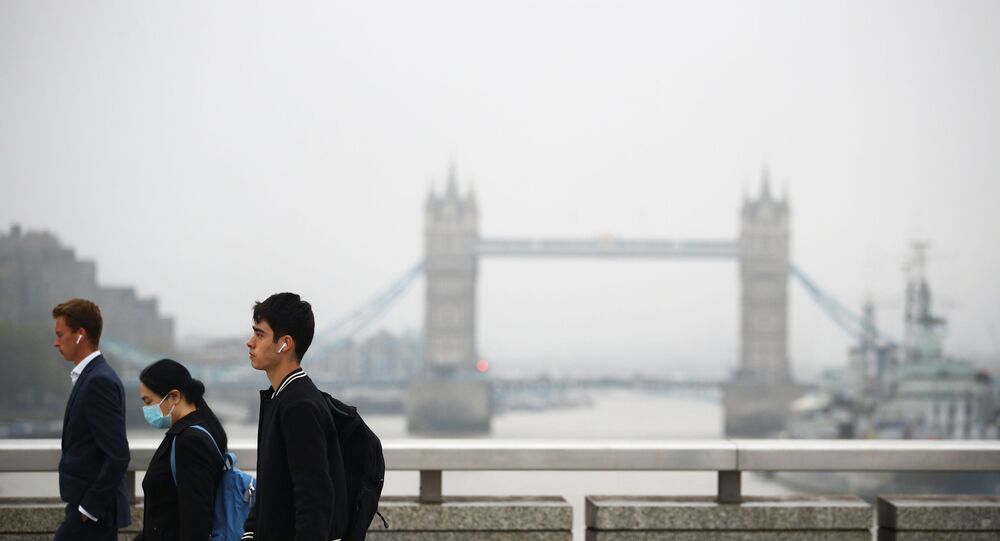 On 22 September, UK Prime Minister Boris Johnson announced a set of new restrictions for England, citing a spike in coronavirus hospitalisations. According to the prime minister, hospitalisations in England have more than doubled recently. The new rules are expected to remain in place for six months.

Dr Matt Cole, a political historian of modern Britain at the University of Birmingham, has shared his views on the new set of restrictions announced by UK Prime Minister Boris Johnson.

Sputnik: How effective will these new measures be?

Dr Matt Cole: Well, what the British government has done today, and it's still discussing in Parliament, is effectively a ratcheting up of the measures they already have so that businesses can continue to operate. But the greatest dangers of transmission of the virus can be reduced. So pubs and restaurants will have to close at 10 o'clock instead of 11 o'clock, when they would normally close. The number of people who can be at a wedding has been halved to 15, and people who can work from home have been told again to go back to work at home. And so this is not a return to full lockdown; it is a tightening of the screws, if you like.

Sputnik: What lessons can be learnt from the previous lockdown?

Dr Matt Cole: The main lesson is about enforcement and about compliance. The British government introduced measures similar to those introduced in other European countries, but the success in enforcing them was only partial. There were opportunities for people to transfer the virus, there was relatively little enforcement of the wearing of masks, for example. The government has relied, understandably, on public support and goodwill and civic spirit, if you like.

The police simply do not have the resources to be able to comprehensively to enforce the rules that have been introduced. That remains a problem. The other problem, of course, is that the government's testing programme, and members of Parliament on both sides of the House of Commons have been raising this today, is not reaching a large enough number of people to be able to identify effectively the location of the virus spreads quickly enough.

Now, the government is trying to appeal to those people who haven't been complying to do so. But there are those who argue that the government's own messaging has been ineffective, that it has changed its message - indeed it's changing its message today - too much for people to understand clearly. There are different rules in different parts of the country and there remain different rules after today. And, of course, some of the government's own members and staff are known to have broken the rules and to have argued that they have not broken the rules; the so-called Cummings effect has undermined public confidence.

We know from opinion polls that fewer than half of the public now support the government's response to the crisis, whereas it used to be two-thirds of them at the start of the crisis. The prime minister's own poll rating has fallen very significantly, again from about two-thirds support to now being in negative rating - more people disapprove of the prime minister's record, than approve of it.

Now, that wouldn't be so surprising in the mid-term of an ordinary government, but in the middle of a crisis, it's unusual and particularly significant. So public confidence is going to be part of the government's problem in enforcing these new rules. If it's able to demonstrate a commitment to more widespread testing and if it's able to demonstrate that the rules are being complied with by the majority of people and that those who break the rules are being held accountable by the police - if those messages can get across, it may be able to make these rules work. But at the moment, the rules are merely announcements. It's how well they're enforced that makes the difference to the virus.

Sputnik: What's the situation in the country right now? Are people for or against a prolongation of these restrictions?

Dr Matt Cole: The public are supportive, as far as one can tell. And most parliamentarians, looking at both sides, all parties in the House of Commons, they all accept the need for more constraints. The public clearly don't enjoy them, and businesses, particularly, are fearful of the effects; but they all accept the need for greater constraints because of the rising infection rate. What they are concerned about, particularly people who are in vulnerable jobs and people who have businesses that are in danger of going under, is the level of government support.

© AP Photo / Alastair Grant
Corona Schism: UK Scientists Split Over How Government Should Deal With Surge in COVID-19 Cases
One of the issues on which the prime minister was challenged repeatedly today, including by some Conservatives, was the way in which the most vulnerable businesses and the people whose jobs are most vulnerable can be offered more help after the end of the furlough scheme. The furlough scheme is coming to an end in about a month's time. The government is being pressed to do more. The prime minister is using the phrase that the government will be "creative and imaginative" in how it helps business and that it will put its arms around workers who will likely lose their jobs.

But something more specific than this is going to be necessary to inspire confidence in those parts of the economy.

Sputnik: To what extent can the "bar curfew" be a stumbling block in imposing the new restrictions as the government tries to push for stricter measures to curb the resurgence of the virus? Will we see an outcry from hospitality businesses?

Dr Matt Cole: Hospitality and catering have been the part of the economy most heavily hit by lockdown, because in the original lockdown they were unable to operate at all. More recently, they have worked in a more regulated environment where they have had to take address details of customers. They have had to offer table service sometimes rather than to serve people at bars, so their revenue has fallen significantly.

Certain parts of the catering business and particularly pubs and restaurants take most of their revenue after 10 o’clock at night; that's when the largest amounts of money changes hands. They, clearly, again, are going to suffer. So the problem here will be twofold. It will be for the owners of those businesses, who now argue that they need more support from the government; but also the employees, who are very often the younger members of the workforce in Britain and who are therefore most likely to be left without work if those businesses aren't able to carry on.

So, yes, it is placing greater constraints on an already damaged and vulnerable part of the economy, which provides work for a large number of young people and encourages people into city centres, where they would spend other money as well. There is now also greater doubt about the restaffing, for example, of theatres in Britain, because of these increased controls, of which there was some hope until recently.

So this is relatively easily enforceable, because the police can tell whether a bar or restaurant is open after 10 o'clock and they are not allowed to be open. It's not just that they're not allowed to serve - they are not allowed to be open after 10 o'clock. And it will control movement at a time when there is evidence the virus was spreading later in the evening, when people have had a few drinks, when they're together in large numbers. It was easier for people to transfer the virus. But, the government is engaged in the same balancing act that it is elsewhere in its COVID response, which is to say every time it takes a measure which controls the virus, it also takes a measure which damages the economy - and it's trying not to do that.

Sputnik: How can the government ensure both the health of citizens and the economy's sustainability?

Dr Matt Cole: Well, if I knew the answer to that question perfectly, I would write to the prime minister with it. The government's central problem is the declining public confidence in the consistency, and the effectiveness, and the enforcement of the decisions it makes. All laws need public consent in order to work, particularly ones that intervene in our private lives. As the public loses confidence in the consistency and in the enforcement of laws, the laws become less effective.

If the government can somehow reinforce its sense of authority with the public, then it will do well. One way of doing that might be to try to come to more consensual policies. For instance, over the furlough scheme with opposition parties; if they could genuinely present their policy as a national one rather than one of the government, it might help to command more public support. But the prime minister was quite confrontational with the leader of the opposition today in Parliament. He was reaching out to most other MPs, but he is clearly annoyed with the leader of the opposition and isn't in a mood to cooperate with him.