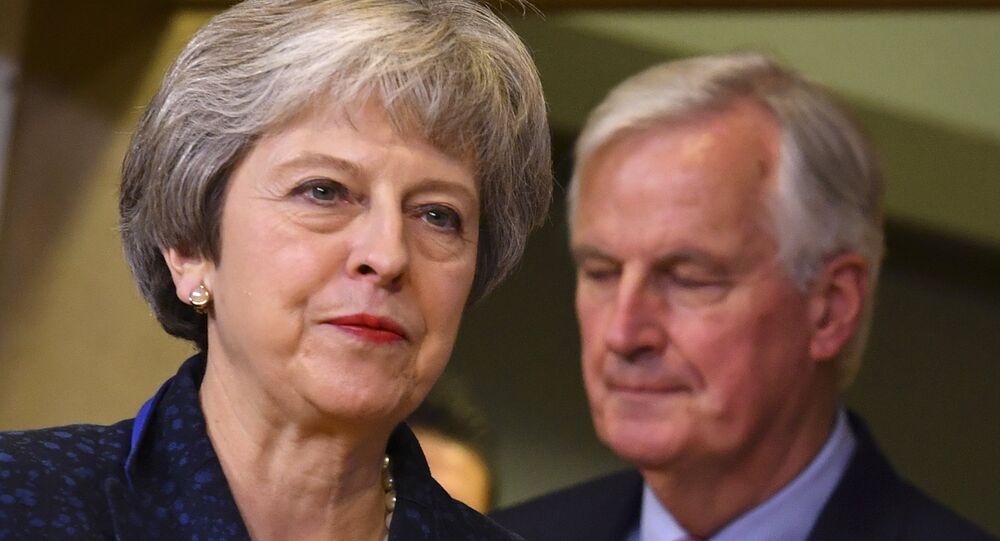 UK lead Brexit trade talks negotiator Lord David Frost said in a Mail on Sunday interview the UK was prepared for a no-deal outcome and not scared of a hard Brexit. Frost said Brussels needed to realise the UK would no long 'blink' in talks as former Prime Minister Theresa May had done.

A former member of ex-prime minister Theresa May's Brexit talks team has claimed lead negotiator Lord David Frost had a "brass neck" to say May "blinked" in the showdown with the EU.

May's former Downing Street chief of staff Gavin Barwell insisted in a tweet that last Autumn's Brexit Withdrawal Agreement and Political Declaration were 95 per cent the work of May's team, of which he was a member - and accused Frost and PM Boris Johnson of caving to European Union demands that Northern Ireland remain in the Customs Union.

"The 5 per cent that was new involved giving in to the EU's key demand (for some customs processes when goods move GB to NI) - that quote's some brass neck," Barwell added

​"We came in after a Government and negotiating team that had blinked and had its bluff called at critical moments and the EU had learned not to take our word seriously," Frost told the Mail on Sunday. "So a lot of what we are trying to do this year is to get them to realise that we mean what we say and they should take our position seriously."

© Flickr / Kalyan Neelamraju
EU Demands Potential Veto on Britain's Post-Brexit Laws, Regulations - Report
Meanwhile, Foreign Secretary Dominic Raab said a deal was "there for the taking" if Brussels would drop its demands for continued access to British fisheries and for the UK to follow EU regulations it has no say over since leaving the EU in January.

"I think this week is an important moment for the EU to really effectively recognise that those two point of principles are not something we can just haggle away – they are the very reasons we are leaving the EU – but we want a positive relationship and the arm of friendship and goodwill is extended," he said. "It is up to the EU to decide whether they want to reciprocate."

But French Foreign Minister Jean-Yves le Drian warned there was an "urgent" need to break the negotiations stalemate, which he blamed on the British.

"The British people do not seem to understand that if one wants to negotate a good deal, one must talk about all issues," Le Drian told France Inter radio.

"It's not going well, with only two months left, it is urgent, the countdown has started. We prefer to reach a deal but we need to discuss the whole package, including fisheries, to avoid a no-deal," he added.