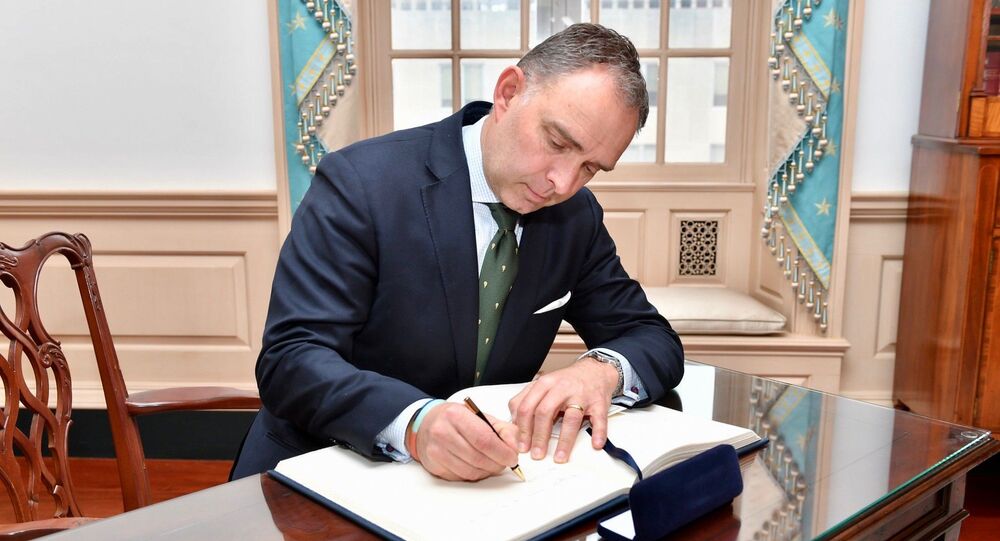 Amid an announced government “reset” as Britain emerges from the worst of the COVID-19 pandemic to shift focus onto post-Brexit issues, the UK’s head of the civil service Sir Mark Sedwill has announced he will stand down in September, stating he would resign from the positions of Cabinet Secretary and National Security Adviser.

UK Prime Minister Boris Johnson has made conciliatory gestures by promising Cabinet Secretary Sir Mark Sedwill that as part of his exit package, he will nominate him for the post of NATO’s next secretary-general, reports The Times.

Although securing the NATO position was presented by Johnson as a critically important part of his “Global Britain” agenda, senior Whitehall sources were cited as saying that they also doubted the likelihood of the Prime Minister following through on his promise.

© REUTERS / Omar Sobhani
Mark Sedwill Resigns as UK Cabinet Secretary and National Security Adviser
The post is only anticipated to be vacated at the end of 2022, as in December 2017 NATO allies extended Stoltenberg’s term as Secretary-General of the Western military alliance, granting the former Norwegian prime minister a six-year mandate in the top job.

Another source claimed that one potential obstacle is the fact that Sedwill may find it a challenge to secure the support of other European NATO members.

The top NATO position is believed to also be sought by Dutch Prime Minister Mark Rutte.

“I think Mark is either brave or courageous to accept a promise that they’ll do that in 2022… I really hope they keep their word, but we’ve all seen this happen before. They say ‘don’t worry, we’ll support you’ but it’s basically half-hearted. They end up sacrificing you for something that they really want,” a Whitehall source was cited by the outlet as saying.

Cabinet Secretary Sir Mark Sedwill, the country's top civil servant, announced on 28 June in a letter to Prime Minister Boris Johnson that he would be standing down from his role as Cabinet Secretary, National Security Adviser and head of the Civil Service.

Sedwill had served as National Security Adviser since 2017, after being appointed by Theresa May. He took on the role of Cabinet Secretary in 2018.

The appointment of a political adviser rather than a career civil servant drew criticism from some senior government figures, with former cabinet secretary Lord O’Donnell warning that “political appointees” were more likely to be “yes men” rather than “speaking truth to power”.

The developments came after 27 June, when Boris Johnson announced a looming overhaul of Whitehall, reportedly spearheaded by his chief adviser Dominic Cummings.

As the country gradually emerges from the coronavirus pandemic, the Prime Minister is hoping to “reset” his government to shift focus on post-Brexit related issues.

Chaired by Johnson, the domestic and economic strategy committee will reportedly include only Chancellor Rishi Sunak, and Michael Gove, the Cabinet Office minister, as full-time members, with others “invited to attend according to the agenda”.

However, the No 10 “revamp” has unleashed a barrage of criticism targeting the Prime Minister.

Sedwill was reported as having fallen out with Cummings, and suggested as being designated a scapegoat over criticism of the government’s handling of the COVID-19 pandemic, including on issues such as the supply of medical equipment, and the UK's testing and tracing capacity. He was also believed to have opposed changes in Whitehall, pushed for by Cabinet Minister Michael Gove.

Sedwill’s former colleagues were cited as suggesting he had been unfairly “smeared” by Johnson’s aides.

A former head of the civil service, Lord Kerslake, was quoted as saying by The Guardian that Sedwill’s ouster followed increased attempts to blame civil servants for failings in handling the COVID-19 pandemic.

“I fear from some of the press briefing that had obviously gone on that the civil service is being made the fall guy for mistakes made in the handling of the pandemic. This is grossly unfair. We urgently need an independent inquiry to look at the lessons that can be learnt,” he said.