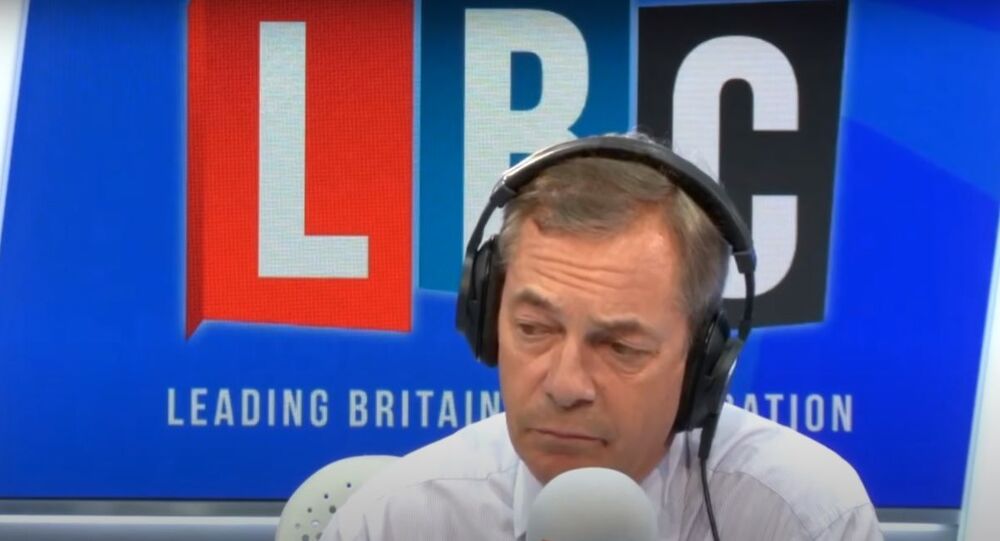 The outspoken former leader of two political parties and campaigner against immigration will end his years-long relationship with a British radio broadcaster amid global protests over the death of a Black man in the US in police custody, UK media reported on Thursday.

Farage hosted his hour-long show each Monday to Thursday and a further show on Sunday for the last three years.

"We thank Nigel for the enormous contribution he has made to LBC and wish him well," the LBC noted in a tweetd.

​Farage, 56, was the former leader of the United Kingdom Independence Party (UKIP) and held numerous talks on immigration and Brexit as well as a major interview with US president Donald Trump.

But the Brexiteer has been a staunch opponent of removing statues amid the ongoing Black Lives Matter protests, including the removal of Boy Scouts founder Lord Baden-Powell and Edward Colsten statue in Bristol.

Farage sparked public backlash over several comments where he named the BLM movement a "far-left Marxist group" in a heated debate on Good Morning Britain this week.

Speaking further, Farage said on his radio programme: "Some have been marching, but some have gone a bit further than that".

He said he was "astonished" by the defacing and toppling of a statue of Italian explorer Christopher Columbus in Richmond, Virginia this week.

"This is cultural Marxism and they will do their best to eradicate anything and everything they dislike. If you think in this country they'll end with statues that are linked to slavery, you've no idea what is coming, unless somebody at the top of this country actually has the moral courage to stand up and say, 'this is ridiculous'," he said on Wednesday.

The comments come amid fierce protest gripping major cities in the US and Europe following the death of George Floyd, a man arrested for purchasing items with a counterfeit $20 note and later killed in police custody in Minneapolis.

Mr Floyd was filmed suffocating under a police officer's knee for around eight minutes while handcuffed in late May, despite telling the officers he could not breathe.

The incident sparked mass protests and debates on police brutality in the US and abroad, resulting in the defacing and toppling of numerous statues associated with the Transatlantic Slave Trade and local governments mulling whether to remove further ones.

Calls to reform and defund the police have been voice by activists, but faced Republican opposition in the Senate.