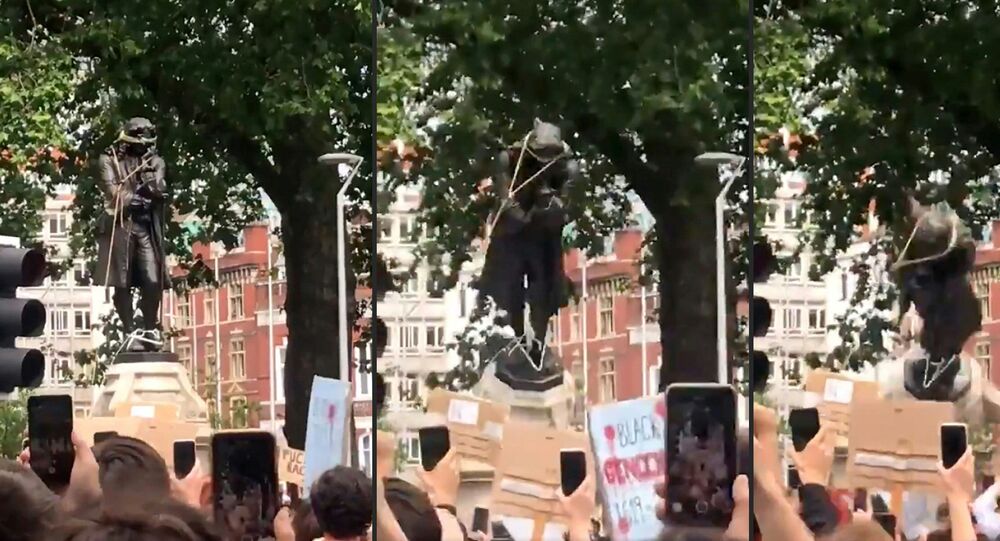 Where Does It All End? Anti-Racist Group Draws Up Hitlist of Statues They Want to Tear Down

Black Lives Matter activists tore down a statue of slave trader Edward Colston at the weekend and threw it into Bristol’s harbour. It comes in the wake of a global questioning of “racist” statues following the death of George Floyd at the hand of white police officers last month.

Edward Colston’s statue has been fished out of the water in Bristol and is set to be rehoused in a museum but the demand for the removal of other figures from British history grows unabated.

A Liberal Democrat-controlled council in Dorset, in the south west of England, has decided to temporarily remove a statue of Robert Baden-Powell, the founder of the Scout movement from the quayside in Poole.

“Everybody, there’s nobody against it” says crowd of entirely white, middle-aged residents. https://t.co/GggEhn079L

​The seated statue of Baden-Powell overlooking Brownsea Island, where he held the first Scout camp in 1908, is being removed after activists highlighted his support for Adolf Hitler and Benito Mussolini in the 1930s.

Do racists have to be statues before we can throw them into the sea? x

​The local council said it had received advice from the police that the statue was set to be targeted by demonstrators. But 10,000 people have signed a petition to keep the statue.

Bristol City Council said the statue of Colston was "being taken to a secure location before later forming part of our museums collection."

The people who did this have almost certainly never heard of Abraham Lincoln. People need to understand the woeful level of education in the modern UK. https://t.co/xcHVodJbje

​Meanwhile an activist group have posted a list of statues it wants to remove under the banner “Topple The Racists" and it includes imperialist and entrepreneur Cecil Rhodes in Oxford.

So who else is on their map of "problematic statues" and why?

Lord Herbert Kitchener - whose statue stands in Chatham, Kent - is most famous for the “Britain Wants You” recruitment posters which were printed in the First World War and bore his image because he was the Secretary of State for War.

Lord Kitchener won notoriety for his imperial campaigns, most especially his scorched earth policy against the Boers and his establishment of CONCENTRATION CAMPS during the Second Boer War in which between 18k and 28k men, women and children died, mainly from disease epidemics, pic.twitter.com/R1OVth4VNu

​Protesters want him to be removed because of his actions in the Second Boer War, when he created "concentration camps” to detain hostile South Africans. More than 40,000 people died in the camps.

But a poll carried out on the local newspaper’s website found 91 percent were in favour of keeping him.

Petition calls for removal of Sir Francis Drake statue from Plymouth Hoe. This Mob Rule Anarchy Has To Stop. Police Get A Grip!- Plymouth Live https://t.co/nNrwevpGXz

​There is also a Kitchener Memorial in the Orkney Islands.

At the other end of the UK there are several statues in and around Plymouth - the historic naval port - of Francis Drake, the English sea captain who is credited with defeating the Spanish Armada.

Drake was a slave trader so his statue should be removed, or at the very least be covered in multicoloured patchwork. Here's why.. pic.twitter.com/Of5QzCMH6I

​The Topple The Racists group say: "What people fail to remember is his contribution to the slave trade with his cousin John Hawkins, in which he would attack native villages or steal human cargo from Portuguese slave ships he attacked and transport the slaves to the Spanish Caribbean and sell them off to local plantations."

The group are also calling for the removal of a state of Robert Clive, known as Clive of India, in the centre of Shrewsbury in the Midlands. They say “Clive played a central role in seizing control of a large swathe” of what is known India, Pakistan and Bangladesh.

This is Robert Peel, founder of British policing. Because of him, our police aren’t armed - he is why UK police killed just 3 people last year, while US police killed 1,536. So writing All Cops Are Bastards on him may undermine your case. As may the murderous hammer and sickle... pic.twitter.com/laMOe7zqmT

​Another target is Sir Robert Peel - the founder of the Metropolitan Police - whose statue has a prominent position in the city of Leeds.

A petition claims "he was pivotal in setting up the police forces which maintained British rule in Ireland and a system which led to the poverty, famine and displacement of Irish people. Colonialism and racism - in this case anti-catholic sentiment - are central to British history."

In Edinburgh the city council have offered to put up a new plaque on a 150-foot monument to 19th century politician Henry Dundas, who was linked to the slave trade.

The council said the plaque would be dedicated to the "memory of the more than half a million Africans whose enslavement was a consequence of Henry Dundas's actions."

Always intrigued by the 'We Must Not Rewrite History' brigade.

History is rewriting. That is what historians do. The word 'history' comes from Greek 'historia', which means inquiry, research. History is an activity, not a static thing.

OF COURSE WE SHOULD REWRITE HISTORY.

​Social media though is very divided between those calling for statues to be removed and those claiming it is damaging to the national psyche.

There is also a debate going on in the Republic of Ireland about some of its statues, including one of Sean Russell, an Irish republican who died in 1940 when the U-Boat he was on sank. He had been on his way to Germany to try and get Hitler to help kick the British out of Northern Ireland.

The Taoiseach, Leo Varadkar, said: "We have a few of our own statues we may need to take down. There is a statue in Fairview Park in Dublin of an Irish republican man who was also a Nazi collaborator…I think any statues that come down should come down legally…let's not engage in violence."