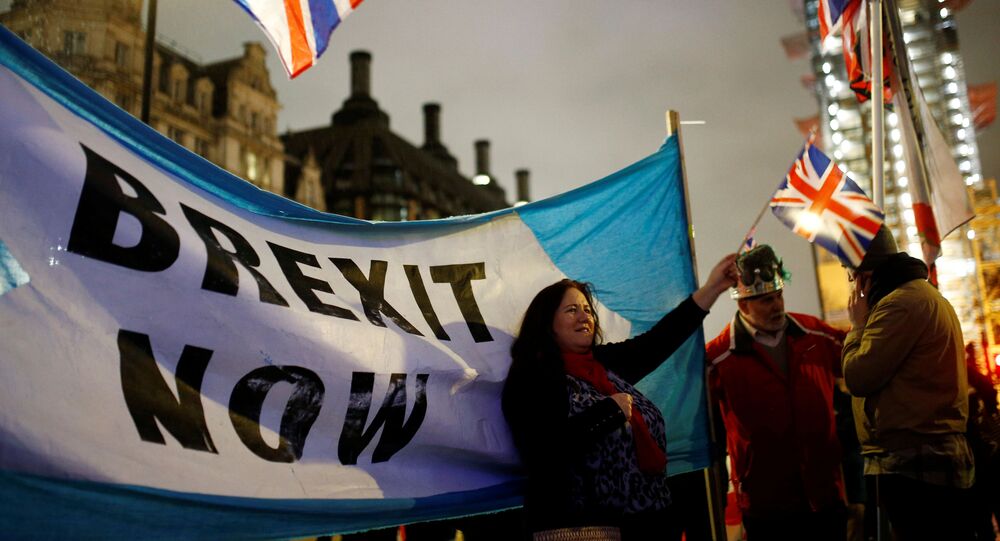 As Britain has finalised its landmark withdrawal from the EU, the scene is now set for a bitter dispute with Brussels about the concessions Britain is supposed (if it at all chooses to) to make in pursuit of a “Canada-style” deal - an accord that removed 98 percent of tariffs between Ottawa and the EU.

In a Monday speech to the business community, Prime Minister Boris Johnson is understood to be prepared to make it clear that Britain would rather okay tariffs than adopt European legislative regulations, and that Britain has “made our choice” in choosing a regulatory path different from EU’s, The Times reported.

Vis-a-vis trade goals, Boris Johnson is reportedly set to accept and stress that he has prioritised internal British legislation over full unlimited access to the European single market, in order for his country to reclaim total control of its own laws. The head of the now post-Brexit UK government is said to be going to emphasise demands that Brussels treat Britain as “equals”.

A free trade “Canada-style” accord aside, Downing Street is meanwhile reportedly willing to resort to an “Australian” version of no deal, or any other looser arrangement, with the prime minister expected to assert “there is no need for a free trade agreement to involve accepting EU rules", the British broadsheet remarked.

“There is no need for a free trade agreement to involve accepting EU rules on competition policy, subsidies, social protection, the environment or anything similar any more than the EU should be obliged to accept UK rules", business leaders will reportedly hear him state at a London gathering.

“The UK will maintain the highest standards in these areas — better, in many respects, than those of the EU — without the compulsion of a treaty and it is vital to stress this now", the speech will further say, it has been revealed.

Johnson is expected to explicitly state that the UK wants a free trade agreement, similar to Canada’s, or Australia’s predominantly tariff-based accord, but “in either case, I have no doubt that Britain will prosper", Johnson is quoted as saying.

The scene for the blunt rhetoric was in part set by Sunday’s comments made by UK Foreign Minister Dominic Raab.

He stated that Britain was “entering these negotiations with a spirit of goodwill”, ascertaining though that “legislative alignment just ain’t happening and we’d better be clear about that from the outset”, while also expressing concerns about EU conditions for a Canada-type deal.

Klaus Jurgens, a political analyst and journalist from the UK, believes that while there is uncertainty in the financial markets and the investment sector over what will happen 11 months later when the transition period expires, the "doom and gloom scenarios" are exaggerated.

Per him, if the EU and the UK are "really honest about striking a deal", it could be reached within 11 months.

"It is indeed very interesting to see that shortly before Brexit there was this doom and gloom scenario promoted by the EU leaders in particular, saying: 'Britain made a mistake, it can never work, the economy will go down'. Now the analysis... based on what the international monetary fund says, the British economy post-Brexit will very soon outperform both Germany’s and the European remaining 27 as a whole entity. It chats a completely new light on post-Brexit economy in the UK", he opines.

According to Jurgens, more than 100 new banking financial consultant institutions or individuals are planning to relocate to the UK following its divorce from the EU.

"And the reason is simple – it is all about profit, how to make money, how to invest, how to yield a profit. Now this is something the EU in Brussels might perhaps not want to hear – very interesting. Secondly, if we take a look at another doom and gloom scenario that one million, two million of the EU citizens currently residing in the UK would immediately disappear. This is another fake news. Well over 2/3’s have already applied for settled status. I think almost 60% got this one, 40% the pre-settled version and I understand, in December only 6 applications were completely rejected on different grounds not being EU national as such", the analyst says.

Jurgens suggests that the German economy is contracting, as well as other economies in Europe anyhow, and "a post-Brexit Britain could attract new investment and new spirit".

"It might actually lead to not only one big free trade agreement between the US and the second one between the EU – it’s biggest trading partner in the UK. But  many other countries from Australia to Argentina to Turkey and of course Russia, as a key major economic player in play", he says.

Britain’s almost century-long membership in the EU formally ended at 11 p.m. on Friday, 31 January, to the joy of millions of leave proponents that have argued since the 2016 referendum that Britain has its own promising economic and political path to pursue.

The departure has ushered in a whole new stage, a so-called 11-month transition period, with the clock ticking for regulatory and economic issues to be finally resolved with now former EU allies.