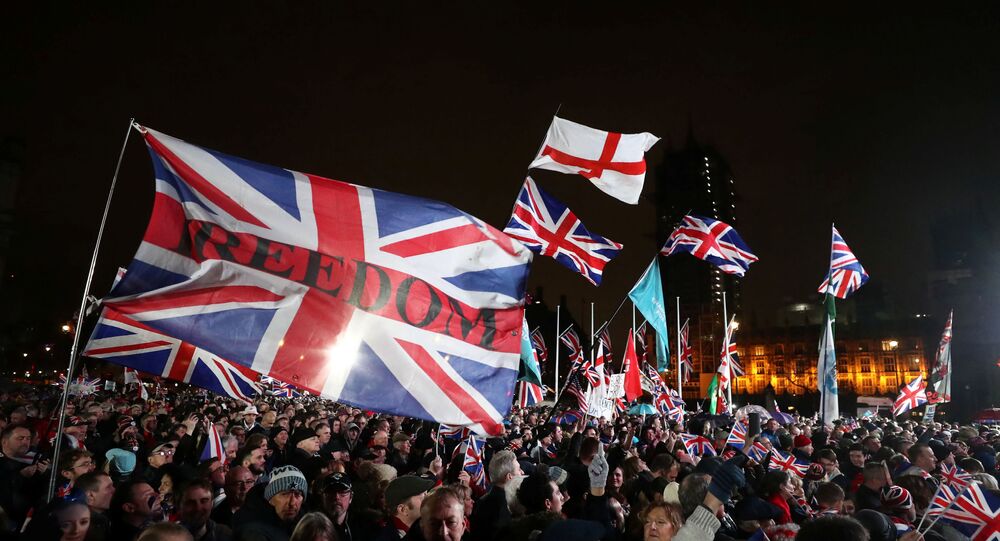 UK Prime Minister Boris Johnson vowed in a pre-recorded video address that the British government would use all the authority it has to make the United Kingdom a more equal and dynamic place after Brexit.

On 31 Friday January 2020 at 23:00 GMT, the United Kingdom left the EU in accordance with the withdrawal agreement that was signed last week. The exit is followed by an 11-month transition period so that both London and Brussels can settle pending economic issues, the most pressing of which are future trade relations.

In a pre-recorded address broadcast an hour before Britain's historic exit from the bloc, Johnson said Brexit is a chance to make Britain a better place.

"The most important thing to say tonight is that this is not an end but a beginning. For many people this is an astonishing moment of hope, a moment they thought would never come. And there are many, of course, who feel a sense of anxiety and loss. And then there's a third group, perhaps the biggest, who had started to worry that the whole political wrangle would never come to an end. I understand all those feelings, and our job as the government -- my job -- is to bring this country together now and take us forward", Johnson said.

© CC0
“Every Choice Has a Consequence” Say EU leaders in Open Letter
During the transition period, the UK will remain part of EU trade deals but will be able to negotiate new trade deals with other countries and with the bloc itself. In addition to trade, the UK and the EU will have to hammer out the details of their relationship in other sectors, like security and fishing rights.

According to Michel Barnier, the EU's chief negotiator for Brexit, 11 months may not be enough to agree on all aspects of the future relationship.

The sentiment among Britons is mixed, because during the lengthy, almost four-year uncertainty that followed the Brexit referendum, both London and Brussels went from lively interest in withdrawal talks to a sort of Brexit fatigue. But the European Parliament on Wednesday bid farewell to Britain with a heartfelt rendition of the song "Auld Lang Syne" after approving the withdrawal agreement.

Despite Brexiteers across the country rejoicing over the country finally leaving the EU, the UK may find the same problems that caused people to support the withdrawal are still there, according to Mark Garnett, a politics professor at Lancaster University and author of the book "From Anger to Apathy: The British Experience".

"As the final minutes to Brexit ticked away, it was clear that real rejoicing was confined to a relatively small number of people who, for one reason or another, had convinced themselves that membership of the European Union had been seriously damaging to the country. It is quite possible, of course, that if Britain was cutting its formal ties with the EU overnight, there could have been a much greater outpouring of nationalistic sentiment", Garnett stated.

He also noted that London had only reached the end of phase one of the process, and "the next instalment of Brexit might prove to be even more difficult" than the first, adding that the country is still divided by the Brexit issue with a narrow majority in favour of remaining in the bloc.

"In these circumstances, prime minister Johnson faces a series of dilemmas. He can only hope to restore a sense of unity in the country if he aims for a very 'soft' Brexit. But he owes his current parliamentary position to the impression that he will be a very tough negotiator with the EU, on the alleged basis that the UK enjoys a very strong position in forthcoming negotiations over trade. These claims will now be tested".

"Johnson's position also rests in part on his apparent appeal to voters in the areas of Britain which have not benefited from EU membership. These areas, in fact, have been neglected by British politicians, rather than 'eurocrats'. If there is no improvement in living standards in these areas over the next five years, the Conservative Party is likely to pay a heavy price".

He concluded noting that numerous voters in Northern Ireland and Scotland will press for independence from the UK if there is no significant improvement as a result of Brexit.

"Every Choice Has a Consequence", Say EU Leaders in Brexit Letter

Brexit Britain is Not Racist