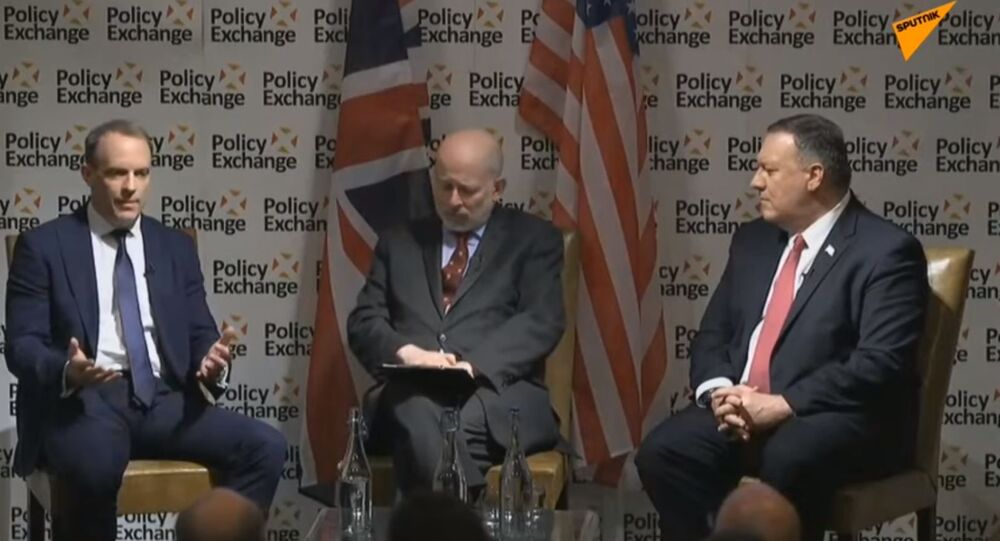 Iran Must be “Held to Account” for its “Destabilising Behaviour”, UK Foreign Minister Believes

Dominic Raab and Mike Pompeo discussed their countries respective foreign policies, as they relates to Iran, Russia, and China, during a one hour event hosted by the UK-based centre-right Policy Exchange think tank.

Iran must be "held to account" for the fact that it has been reducing its commitments under the Joint Comprehensive Plan of Action (JCPOA aka the Iran Nuclear Deal) and for its "destabilising behaviour" in the Middle East, the UK Foreign Minister Dominic Raab said in London on 30 January. Raab was speaking with US Foreign Secretary Mike Pompeo as part of a discussion on foreign policy, hosted by the influential Policy Exchange think tank.

"Look, you've got the JCPOA and our different views that we have on it but it's the only deal in town at the moment. Our approach... is to hold them to account for that non-compliance. That's why the E3 [UK, France Germany] has triggered the dispute resolution mechanism. We want to say to Iran we're calling you out. Equally.. we want them to come back to compliance".

Under the JCPOA Iran agreed to what observers referred to as among the most comprehensive inspections that any state has ever accepted. In exchange the US, and allied states, agreed to withdraw sanctions which have had a deleterious effect on the Iranian economy. The International Atomic and Energy Agency (which is responsible for ensuring compliance of the deal) repeatedly confirmet that Iran was in full compliance with the JCPOA. But the US ultimately abrogated the deal and re-imposed economic sanctions onto the country in May 2018. Iran continued to abide by the agreement until May 2019, when it said it could not longer allow restrictions on its nuclear programme so long as the main party to the JCPOA, the US, had completely withdrawn from it.

Raab sought to bridge the gulf between the positions of the US, which has withdrawn completely from the Iran Nuclear Deal, and the UK, France, Germany, China and Russia which have said that the deal was working. He argued that there is not much difference between the positions of the US and the UK towards Iran and that it is merely a matter of pathways to get to the same desired result. The Foreign Secretary also said that there was an appetite for a more "wide-ranging rapprochement" with the Iranian state, but that it was down to the Iranian government to change its behaviour.

"This comes down to a decision by the regime in Tehran. Does it want to take the steps to respect international law and to come back into the community of nations? And it can only demonstrate that by its behaviour: on the nuclear issue, on supporting terrorism, and frankly on the appalling treatment of dual nationals... And we can't make that choice for the regime in Tehran. What we can do is hold them to account, every step of the way."

The UK, France and Germany announced on 14 January 2020 that they were launching a complaint against Iran under the dispute resolution mechanism built into the JCPOA.