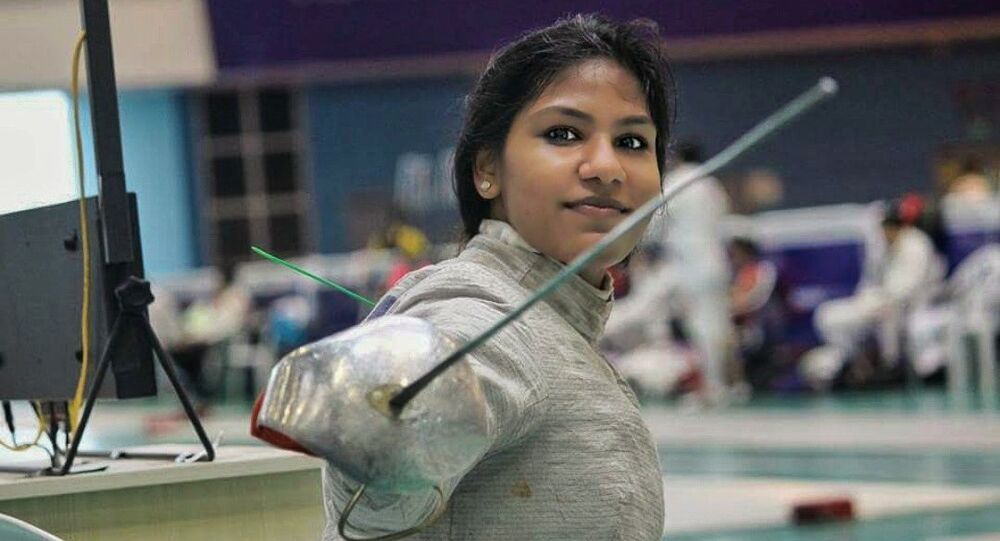 'I Had Tears in My Eyes': Indian Fencer Bhavani Devi on Qualifying for Tokyo Olympics

Chadalavada Anandha Sundhararaman Bhavani Devi, popularly known as Bhavani Devi, is the first Indian fencer to qualify for the Olympics. The 27-year-old from the southern state of Tamil Nadu is the also first Indian swordswoman to win gold at the Commonwealth Fencing Championships, a feat she achieved back in 2012.

Bhavani Devi has won many medals for India during her 13-year career, however, she says qualifying for the upcoming Tokyo Olympics is among her greatest – and left her in tears.

Devi explains that she was completely overwhelmed after the Fencing Association of India (FAI) confirmed that she had booked a place in the Japanese capital.

Her journey has been full of challenges but through sheer grit, determination, and mental fortitude she has risen to the top of the sport in India.

With just two weeks to go before the Olympics kick off, Sputnik caught up with the Indian fencer to discuss her preparations for the Tokyo Games and the future of fencing in India.

Sputnik: Your siblings work as a lawyer and an investment advisor, but you decided to become a fencer. What inspired you to take up the sport?

Bhavani Devi: Fencing! The sport itself. It was unique and something that I had never seen or heard about before. After I took it up I loved it and wanted to continue.

Sputnik: How much have your parents helped you along the way?

Bhavani Devi: They played a vital role in my career, without their support nothing would have been possible in my life. Whatever I am now and will be in future is only because of them.

Sputnik: You are the first fencer from India to qualify for the Olympic Games. What was your reaction when it was confirmed that you have qualified for the Tokyo Games?

Bhavani Devi: I had tears in my eyes and my coach said "We made it!"  I felt so happy and excited that I didn't know what to do. I called my mother and my siblings and my support team to share the great news.

Sputnik: You missed the 2016 Rio Games but qualified this time. What was different this time around?

Bhavani Devi: I made some changes over the past few years to my technique to movement – the experience and lessons I learnt from my Rio experience helped me to qualify for Tokyo.

Sputnik: You have been training in Italy with your coach. Why?

Bhavani Devi: I have known my coach Nicola Zanotti for years – we have a great relationship so it made sense to go to his home country to train.

Sputnik: Do you get financial support to train and compete?

Bhavani Devi: Fencing is quite expensive from equipment to travelling for camps and competitions. We didn't get much financial support before but now the Fencing Association of India has started receiving financial support from the government so myself and other fencers have benefitted as a result.