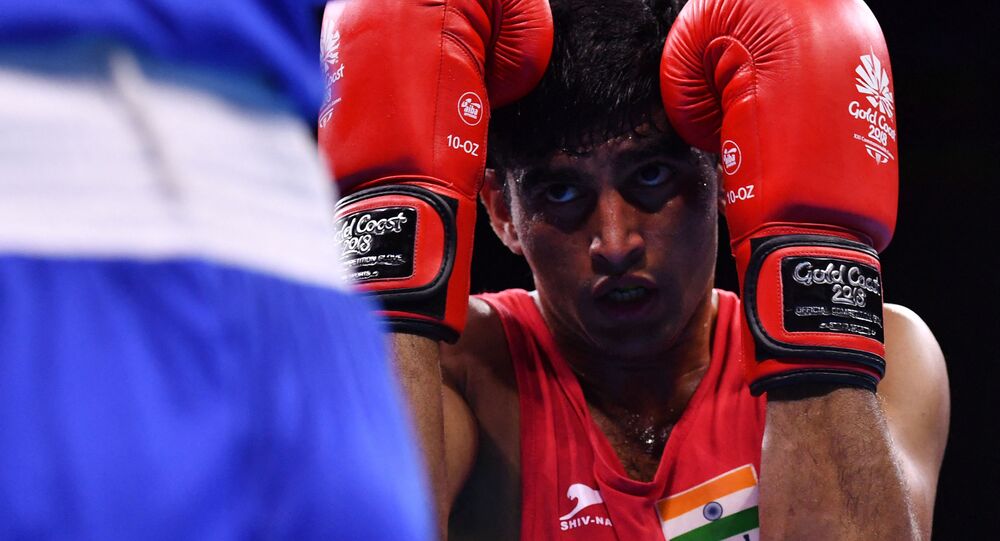 The 2019 World Championships bronze medalist is one of the nine Indian boxers to have qualified for the Tokyo Olympics. The boxer from Haryana state has just recovered from COVID-19 and missed the chance to take part in the recent Asian Boxing Championships in Dubai.

Indian boxer Manish Kaushik, who took a silver medal in the 2018 Commonwealth Games, has resumed his training at the National Institute of Sports (NIS) in Patiala city and is filled with confidence about his chances of winning a medal in the Tokyo Olympics that start on 23 July.

He also believes that all Indian boxers will put up a great show and clinch a record haul of medals in the Japanese capital.

In an interview with Sputnik, Kaushik spoke about his target of a gold in Tokyo, how other boxers are preparing and his heroics during the World Championships.

Sputnik: The Tokyo Olympics are not far away - how excited are you about representing India at such a big sporting event?

Manish Kaushik: It is an athlete's ultimate dream to represent his country at the Olympics. A player not just hopes to perform well, but to win a medal at such events. Like any other player, I am also extremely proud to have had the opportunity to represent India in Tokyo.

Sputnik: Do you think you have a good chance of winning a medal, considering you will be competing against so many top-notch players in Tokyo?

Manish Kaushik: Considering how I've prepared, I am pretty confident of winning a medal in Tokyo. Unlike the World Championships in 2019 when I was an inexperienced youngster, I am more experienced now. I have already faced most of the boxers in my category (63 kg) at different tournaments during the past two years. It would help me in Japan as I know their style of boxing, their tactics, game-plan and most importantly their strengths and weaknesses.

Sputnik: Many were recently affected by COVID. You have also recovered from it. How did it affect your training or fitness?

Manish Kaushik: I wasn't able to train for three weeks. But I have fully recovered and since my comeback, I have focused all my energy on my training. Although I have yet to reach peak level, I am completely focused on achieving my prime fitness levels.

Sputnik: Do you think not having been able to take part in the Asian Boxing Championships had an adverse effect on your Olympic preparations?

Manish Kaushik: I don't think so, although I would admit that if I had been in Dubai, it would have been highly beneficial for me. I would have competed against all the top names in Asia, who will participate in Tokyo. It would have given me an opportunity to assess my own game and their game and how much I have to improve to beat them at the Olympics.

Manish Kaushik: I am not at all disappointed with the performances of Mary Kom and Amit Panghal because both of them lost in extremely close bouts in Dubai. Mary Kom lost the 51kg final by a split decision to Kazakhstan's Nazym Kyzaibay, and Panghal lost in a similar way to Uzbekistan’s reigning world and Olympic champion, Shakhobidin Zoirov, in the men's 52kg final. I am particularly impressed by Panghal's performance and would rate his bout against Zoirov as his best ever.

Sputnik: How do you view the Indian team's performance in the Asian Boxing Championships?

Manish Kaushik: Overall, India's performance in Dubai was exceptional. The likes of Sanjeet Singh (91 kg), Pooja Rani (75 kg) made us really, really proud by winning gold medals in the tournament. Shiva Thapa (64 kg) was a bit unlucky because he should have won a gold too. But overall, it was a great performance by the team. After all, how many times have we won two gold, five silver and eight bronze medals in the Asian Championships?

Sputnik: In the Indian men's team, who has the best chance to win a medal in Tokyo?

Manish Kaushik: In the Olympics, even a dark horse can beat an overwhelming favourite. All you have to do is produce your best performance for about 15 to 30 minutes and you may be standing on the podium. All of us have a real chance of winning a medal in Tokyo. I am sure we will return with a rich haul of medals from the Olympics.

Sputnik: You won a bronze medal at the 2019 World Championships, how did it feel as personal experience?

Sputnik: Who has been your inspiration in evolving as a boxer?

Manish Kaushik: As you all know I am from Haryana state’s Bhiwani District, known as India's 'Mini Cuba'. Star Indian boxer and former World No. 1 Vijender Singh is also from Bhiwani and when he won a bronze medal at the Beijing Olympics, I was inspired by his historic achievement. In fact, after Vijender's medal the craze for boxing in Bhiwani grew to such an extent that almost everyone started to dream of becoming a boxer.