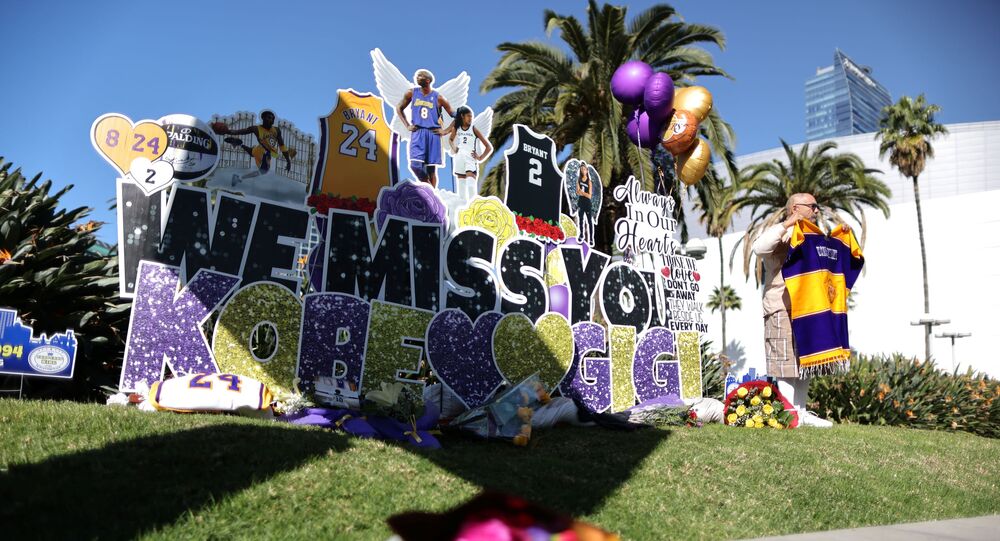 The iconic Los Angeles Lakers basketball player, Kobe Bryant, and his daughter Gianna, along with several family friends and the pilot, died in a helicopter crash in California a year ago, plunging much of the world into shock.

On 26 January, fans, colleagues, friends and celebrities took to social media to commemorate a year without basketball legend Kobe Bryant.

People shared tributes, wrote letters and sent condolences to the Bryant family, which after the tragedy consists solely of  Kobe's wife, Vanessa, and daughters Natalia, Bianka and Capri.

"I miss you, hermano…", Gasol wrote in his Instagram. "...Not a day goes by that you are not present in what I do. Your spirit, your drive, your ambition, your love… continues to shine in my life and in many others."

J.R.Smith, an LA Lakers player, took to Instagram to say: "The game misses your avatar but we all know your soul is all around it. Miss you".

Bryant's club posted a picture of Kobe and his daughter, captioning it "Family is Forever", along with other prominent basketballers. The Barcelona football club also weighed in.

🕊️ Kobe Bryant, you will be forever missed 💙❤️ pic.twitter.com/Igcc9cTsrD

Kobe will always be my @Lakers brother for life. 💜💛 pic.twitter.com/7WC9x6h4Dl

We all miss the Great Kobe Bryant and his legacy will continue to live within all of us, but also make sure we Pray for Vanessa and her family and all the families that lost love ones on this day last year. 💜🙏🏾🙌🏾

Can’t believe it’s been a year since we lost #KobeBryant. Celebrating his life today, and feeling grateful to have known him. 🙏🏻 pic.twitter.com/GAUXTNlx54

We all miss you Kobe pic.twitter.com/JId1kict8K

#KobeBryant was a light in our City of Angels. He was so many things to so many people. Today I’m thinking of the people he meant the most to — his family. This day is hard. It will be hard. Grief is a tidal wave of emotions. pic.twitter.com/QJLRNAbi06

I used to communicate with Kobe Bryant via email. Never forgot the short note he sent me back when I first got the job at @TheUndefeated. Even with the amazing he was doing on and off the court, he found time to offer respect and satisfaction in your success, too. You are missed. pic.twitter.com/0C4O6S68is

​Kobe Bryant, an iconic NBA player, died on 26 January, 2020, in a helicopter crash that also killed his 13-year-old daughter, several family friends, and the pilot. The cause of the accident remains under investigation.