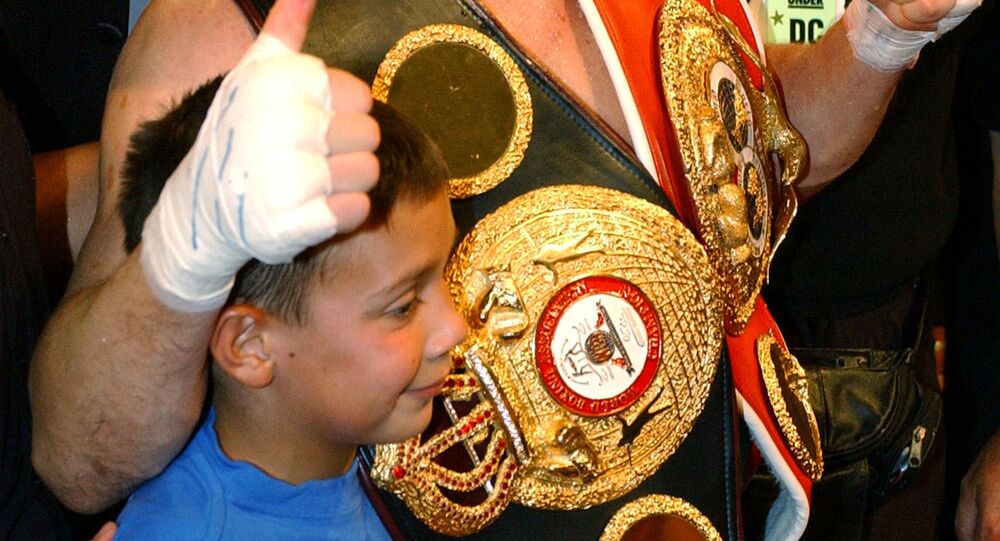 Chip Off the Old Block: Boxer Kostya Tszyu's Son is on the Brink of His Own World Title Shot

After the Soviet Union collapsed in 1991 Kostya Tszyu emigrated to Australia and turned professional boxer, becoming a world champion. His nine-year-old son Tim was by his side when he retained his title in 2003.

The son of Soviet-born boxer Kostya Tszyu - who emigrated to Australia and became a world champion - is emerging as a boxing star in his own right.

Kostya Tszyu was nicknamed the "Thunder From Down Under" and was at one point the undisputed world light-welterweight champion. He retired in 2005 after being defeated by Britain’s Ricky Hatton.

But now his son Tim is making his own headlines.

Last month Tim Tszyu, 25, stopped Jeff Horn in a big fight in Townsville, Queensland to improve his record to 16-0. He is now being tipped for a shot at the world super welterweight title.

​Horn himself had beaten the great Manny Pacquiao in 2017 and the victory has catapulted Tim Tszyu into contention for a bid for one of the title belts.

After the fight Tszyu told DAZN: "It was an honour to share the ring with Jeff” and then added: "I just want everyone to know my name is Tim. Not the son."

The WBC champion Jermell Charlo is taking on Jeison Rosario, who holds the WBA and IBF belts, in a unification fight on Saturday, 19 September, in Connecticut.

​Tszyu would love to fight the winner but it appears more likely that he will be offered a fight against the Brazilian Patrick Teixeira, who won the WBO title last year.

But Teixeira first has to fight the unbeaten Brian Castaño in November - a fight which was postponed due to the pandemic.

Boxing is a very popular sport in Australia and Tszyu’s famous father and his own punching power is making him box office gold dust.

The 25,000-seater Queensland Country Bank Stadium was packed out for the Horn fight - social distancing and coronavirus restrictions were nowhere to be seen - and an even bigger venue is being lined up for a world title shot.

On his website Tim Tszyu has posted a photograph of him as a toddler wearing boxing gloves and he writes: "The desire to win is in my blood, and I’m proud of the legacy I continue to build upon."

But it is not clear if Kostya Tszyu will be at ringside for his tilt at the world title.

Kostya Tszyu was born in the Soviet Union in 1969 and served in the Soviet Army in the late 1980s while fighting as an amateur boxer.

He won a gold medal in the world championships in 1991 and then, as the Soviet Union collapsed, he flew to Australia with his girlfriend Natasha Anikhina.

They got married in 1993 and had three children - Tim is the eldest but he has a younger brother, Nikita, who is also a boxer.

A world title fight could be headed to our shores.

The WBO is considering an application for @Tim_Tszyu to face titleholder @alenteixeira — with approval just days away, reports @ben_damon.#ozboxing #boxing

​But in 2012 Kostya Tszyu left his wife and moved back to Russia to start training fighters in his home country.

Natasha was quoted in the Australian Daily Telegraph newspaper as saying: "If my husband wants to stay in Russia, let him stay there. It is an important life for him. He is an important man there and he is where he belongs. Men should be men."

Few boxing sons have lived up to their greatness of their fathers - Joe Frazier’s son Marvis never came close to winning a world title and nor did the offspring of Tommy Hearns or Alan Minter, who died last week.

Only Chris Eubank junior - whose father was a middleweight champion in the 1990s - has had anything like the impact of his parent.