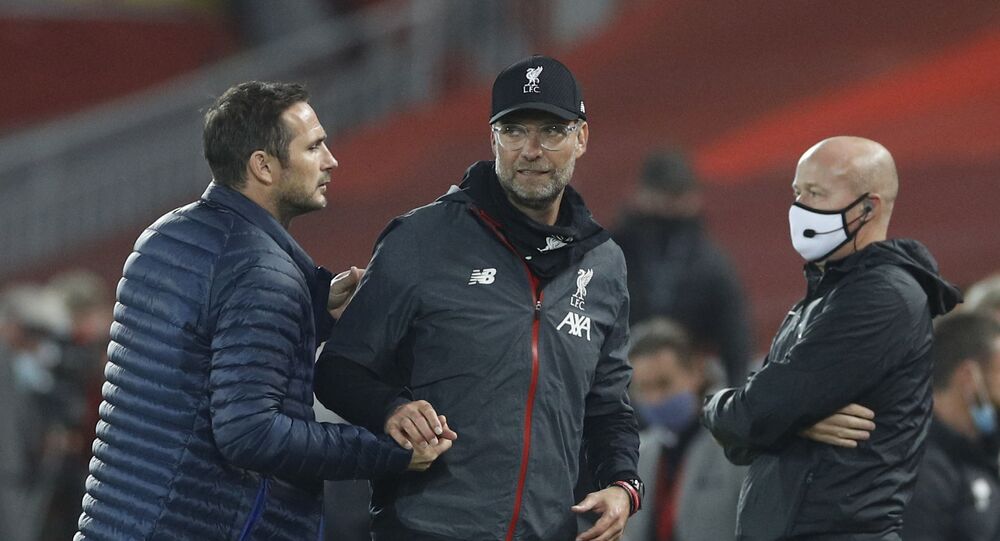 'F*ck Off and All': Chelsea's Lampard Verbal Outburst During Match With Liverpool Caught on Video

After the game, Lampard reportedly said that he has got "no problem with Jurgen Klopp", and advised Liverpool not to get "too arrogant".

Chelsea manager Frank Lampard was spotted making some rather harsh remarks towards the Liverpool bench as the latter team proceeded to thrash his club 5-3 during a recent Premier League game.

According to the Sun, the incident occurred after Chelsea midfielder Mateo Kovacic was "adjudged to have fouled Sadio Mane as the Senegal star broke at pace", with Lampard apparently becoming infuriated with the decision.

"How is that a foul? There's no foul there", Lampard shouted, eventually telling Liverpool's Jurgen Klopp to "sit down" as the latter tried to calm him down.

The ensuing argument, which was joined by Klopp's assistant Pep Lijnders, also saw Lampard dropping remarks like "If he's going off at me I'll f****** say something", "You can f*** off and all”, and "You think you can give it the big one, f*** off."

Later, Lampard told Sky Sports that for him, "it wasn't a foul from Kovacic, and there were a lot of things that weren't going our way", and advised Liverpool not to get "too arrogant".

"But I've not got a problem with Jurgen Klopp. The way he's managed this team has been fantastic", he added. "Fair play to Liverpool Football Club, they've won the league, but also don't get too arrogant with it. That was my point, but it's done. In match play, you can get emotional and that was it."