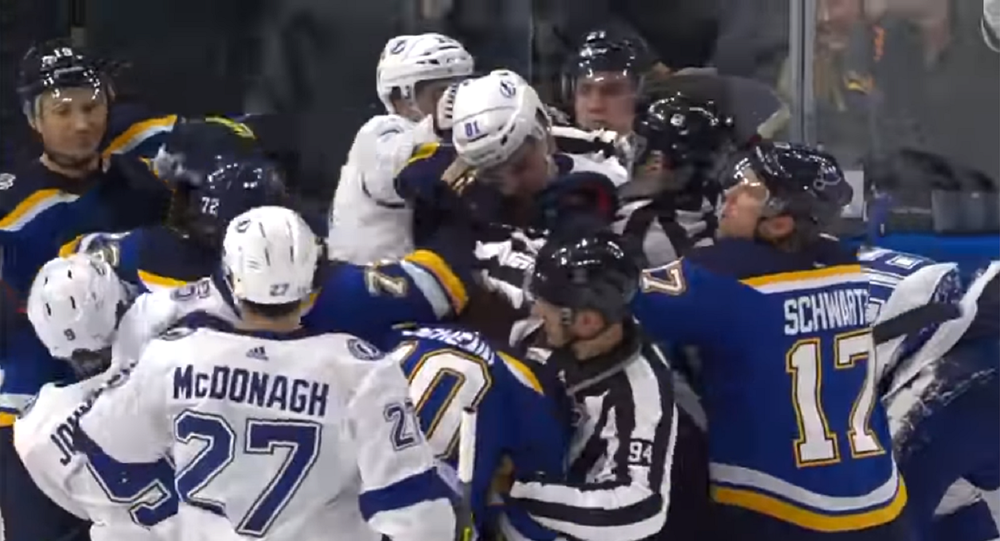 Video of the cheap shot check on Kucherov shows exactly why Kucherov’s Tampa Bay defenceman Erik Cernak ended up getting into fisticuffs with Schenn.

TV footage of the game showed that shortly after Kucherov passed the puck, Schenn plowed into him from behind, causing the Tampa player to fall down hard on the ice, hitting his head.

Cernak, skating nearby and seeing the whole incident, can then be seen grabbing onto Schenn and pinning him up against the boards, gripping him in a bear hug as a ref skates up to try in vain to pry the players apart.

It takes the combined efforts of multiple players from both teams to finally separate the brawlers, with Schenn and Cernak exchanging insults, and Schenn pictured taking a seat in the box on a two-minute penalty. Cernak, meanwhile, got two roughing penalties for his retaliatory strike.

The check left Kucherov out for the rest of the game, which had three minutes left in the second period, skating off the ice on his own but unable to return. Tampa coach Jon Cooper said later that Kucherov’s injury was not concussion-related.

Tampa lost to the Blues 3-1 Tuesday.

Nicknamed ‘The Russian Rifle’, Kucherov is the reigning Hart Memorial Most Valuable Player Trophy and Art Ross Trophy on the most number of points at the end of the regular season, going into Tuesday’s game with 18 points in 18 matchups.

The 26-year-old Russian-born forward Joined Tampa Bay in 2011. Before that, he played for CSKA Moscow in Russia’s Kontinental Hockey League.