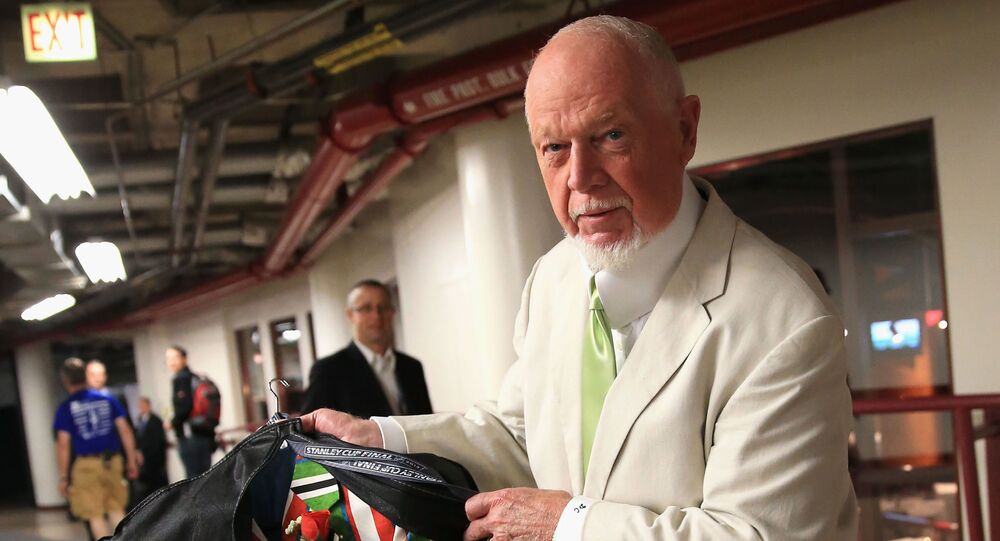 Cherry, who is widely known in Canada for his outspoken views, was dissatisfied with newcomers to the country who do not wear poppies - a symbol of respect for war veterans and military personnel in Canada.

Sportsnet announced the firing of its commentator Don Cherry on Monday, who has been hosting the Hockey Night in Canada show for over 33 years. The announcement followed criticism of Cherry's recent televised comments about immigrants not wearing poppies on 11 November, which the broadcaster found ''divisive'' and contrary to its values.

However, Sportsnet president Bart Yabsley paid tribute to Cherry's role in the game over the past four decades, calling him "synonymous with hockey".

Twitter users expressed frustration that Cherry was fired for his calls to honour fallen veterans while Canadian PM Justin Trudeau was re-elected in the recent national vote despite the ''blackface'' scandal.

The people in Canada screaming racism, discrimination and called for the firing of Don Cherry are the same people that reelected and defended PM Justin Trudeau for wearing black face.

You can't make this stuff up 😂

​Trudeau himself expressed support for critics of Cherry, as he retweeted posts slamming the commentator's recent comments about the poppies.

Earlier, the National Hockey League attacked Cherry, claiming that his comments were "offensive" and "contrary to the values" the NHL believes in.

On Saturday, Cherry said on CBC's Coach's Corner show that immigrants to Canada could ''at least'' get poppies on Remembrance Day to pay respect to Canadian war veterans.

Many social media users dismissed Cherry's comments as ''prejudiced'' and even ''racist'', calling for his resignation.

Don Cherry, 85, is known for his personality-packed straight-out comments, as well as flamboyant dressing style with fancy jackets and ties. In 2004, Cherry was named the all-time seventh-greatest Canadian in the relevant miniseries of the CBC broadcaster.