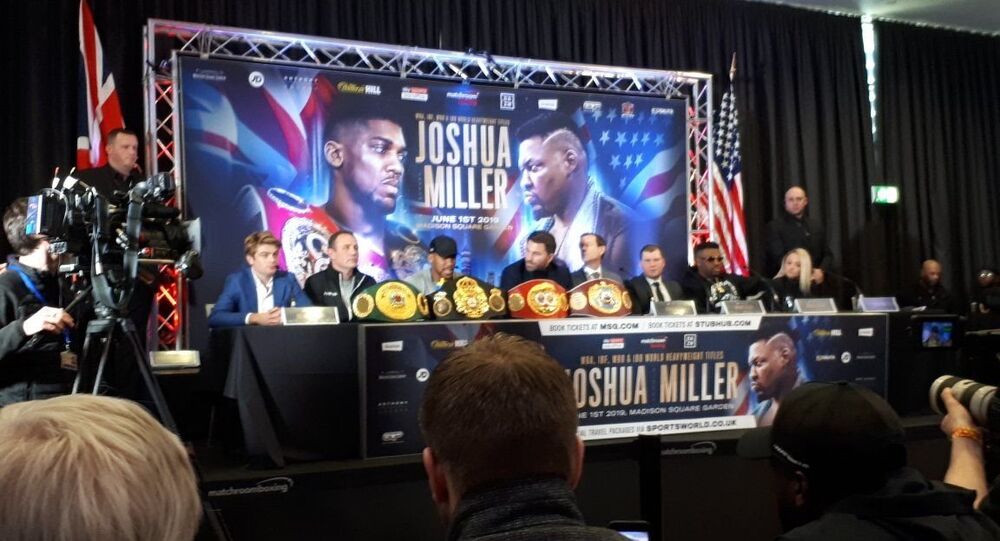 Britain's Anthony Joshua defends his WBA, IBF and WBO heavyweight titles against American Jarrell Miller in New York on 1 June. Sputnik sent a reporter to the press conference to hear what the two boxers had to say for themselves.

Joshua — who is unbeaten in 22 fights — has promised to "reconstruct" the face and body of Jarrell "Big Baby" Miller, who will challenge him at Madison Square Garden later this year.

Few journalists dared to point out Las Vegas is the real Mecca of boxing but the fight will be the first time Joshua has fought in the United States and the choice of the brash New Yorker as his opponent is no coincidence.

Miller has a record of 23-0-1 but he has fought nobody of Joshua's stature and the British fighter's trainer, Rob McCracken, said Miller would be "stepping up" to another level.

"Joshua is going to be the undisputed champion one day. He is a phenomenal fighter, a phenomenal talent. Miller is big and he is good. He has a good boxing IQ but he is stepping up and Anthony Joshua is a bit special," McCracken told journalists.

"I've still got 10 years left. This is all I do. I don't know football, rugby, NFL or kickboxing. Miller talks s*** and I'm going to strip his soul," Joshua said.

Miller vowed that he would end the fight in the first seven rounds, but that led to a brutal retort from Joshua.

"If he is still there after seven rounds I'm going to reconstruct his face on 1 June," said Joshua, who defended his title in September against Russia's Alexander Povetkin.

"I'm going to be his surgeon, I'm going to give him a makeover," the British fighter added.

Although Joshua holds three world title belts he will only become the undisputed champion when he wins the WBC belt, currently owned by another American, Deontay Wilder.

Wilder clashed with Britain's Tyson Fury in December after a dramatic fight which ended with Fury getting up from a knockdown in the last round to earn a draw.

Wilder and Fury are due for an eagerly awaited rematch later this year but there was little mention of either fighter at Joshua's press conference.

"Boxing is not about Jarrell Miller or Tyson Fury. It's about me," said Joshua at one point, as he talked about how he had turned his life around after dipping his toes in crime as a teenager.

Miller said he was happy being the "underdog" going into the fight.

"For all the underdogs who are told they are too fat, don't listen to them. With dedication and maybe a cheeseburger you can go far," Miller joked.

"There won't be many words said in that ring, just punches. It will be last man standing," Joshua said.

The fight will be shown live on Sky Sports in the UK and streamed on DAZN in the US and promoter Eddie Hearn said it had set a record for the "fastest ever presale in the history of Madison Square Garden."

DAZN's Joe Makowski said it was set to be a "truly special night".

"Anthony Joshua wants to be a global force and that is why he is taking his show on the road," Makowski said.