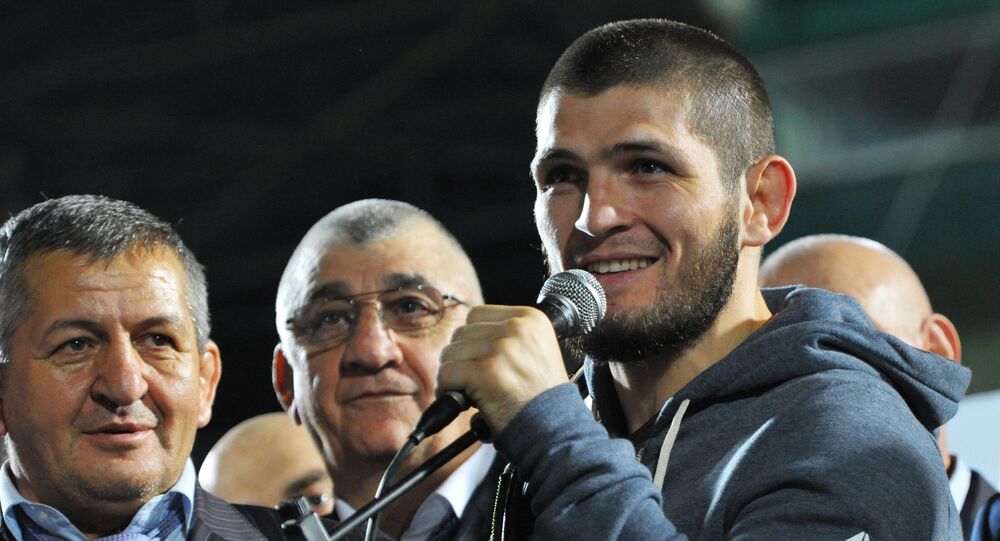 Khabib's Coach Opens Up on Prospects of Fight With Mayweather

In his last fight, Khabib Nurmagomedov defended the title of lightweight champion by defeating Conor McGregor. The latter is now seeking revenge, but the UFC head has other plans for both athletes.

Javier Mendez, coach for mixed martial arts (MMA) fighter Khabib "Eagle" Nurmagomedov, revealed in an interview with the Sports24 website the future prospects for the Russian athlete. According to him, a rematch with Conor McGregor would be best for Khabib right now, but the fighter himself and his father are inclined to having a fight with Tony Ferguson. A bout between the two has also been mulled by UFC chief Dana White.

Mendez also didn't rule out an encounter between Khabib and Floyd Mayweather, but noted that the Russian fighter shouldn't agree to fight according boxing rules, but rather go for a kind of street brawl.

"If Khabib wants to have a boxing fight with Mayweather, he can do it, but we can't box him. No way! We'll have to brawl with him like with a bear", Mendez said.

Khabib Nurmagomedov won the bout against Conor McGregor at the T-Mobile Arena in Las Vegas on 6 October 2018, defending his lightweight champion status. The Irishman submitted to his rival after the latter performed a rear-naked choke on him. After that, Khabib jumped out of octagon and attacked one of McGregor's coaches due to the latter's alleged insults, igniting a melee in which the Irish fighter also participated.

Both fighters were sanctioned for their participation in the post-bout fight. Khabib was fined $500,000 and was suspended for 9 months, but might be able to reduce this by publishing an anti-bullying public service announcement. McGregor was fined $50,000 and suspended for 6 months.

Get in Line! Another UFC Fighter Wants Rematch With Khabib