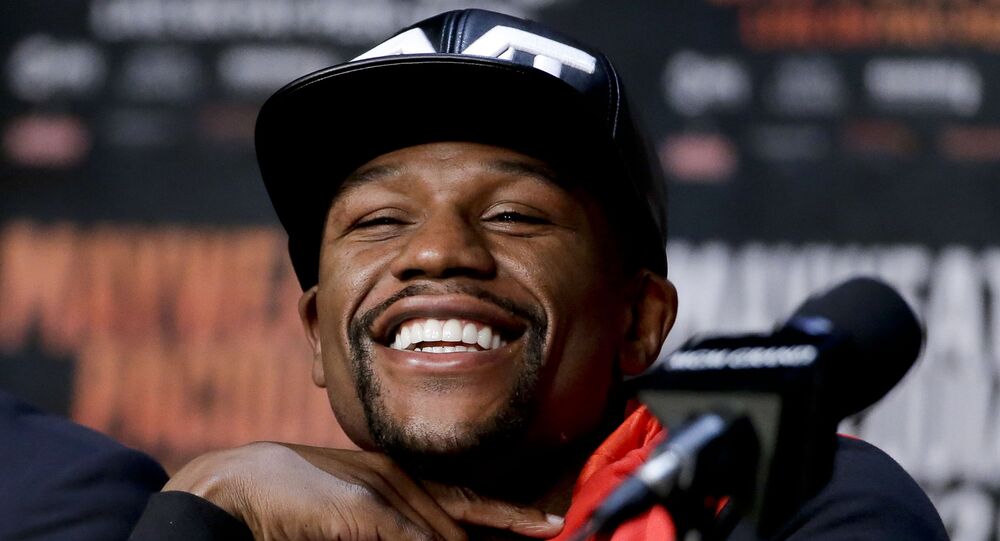 The idea of another cross-fight between an undefeated boxing champion and an MMA star has been floating since Khabib successfully defended his UFC title by winning a fight against Conor McGregor in October. Still, the two sides can't agree on the grand bout’s terms.

The undefeated boxing champion, who has held titles in five weight classes, Floyd Mayweather, has once again confirmed that he is ready to fight Russian mixed martial arts lightweight champion Khabib Nurmagomedov — if the bout is conducted according to boxing rules.

© Sputnik / Said Tsarnaev
'Where Are You?' Khabib Nurmagomedov Teases Floyd Mayweather With VIDEO

In an interview with TMZ Sports on November 16, Mayweather said that despite the fact that it was Khabib who called him out, it was up to the boxer to decide where and how the fight would take place. He noted that out of the two athletes, he was the one to "make nine figures" and hence he was an "A side" and would be choosing the rules and location of the match.

"If your guy wants the fight to happen, it must come my way. My way, my rules," the boxing champion said.

Later, Dana White, the head of UFC promotion, which listed Khabib, responded to Mayweather's statement in an interview with TMZ Sports by saying that if he wants to make $150 million, he has to come to the UFC. White noted that the crossover fight between UFC fighter Conor McGregor and Mayweather was organized according to boxing rules as he desired. The UFC head added that "[Mayweather's] gotta come [to the UFC] this time" if he wants the fight to happen.

READ MORE: 'There Can Be Only One King': Nurmagomedov Calls Out Floyd Mayweather for Fight

Conditions for the bout with Khabib that the boxing champion has laid down have annoyed netizens, as they are pointing out that Mayweather is only picking fights that he knows he can win.

@FloydMayweather “I’m A side. My way, my rules”…. interpretation… “I’ll fight Khabib, but I’m gonna make it where only I can win.” #bitchmade

Some even suggested that he fears that he would lose an octagon fight.

Others mocked Mayweather, calling him the greatest negotiator in sports for his ability to settle big pay-offs and gain the comfortable conditions for himself.

Mayweather should go down as the greatest rule setter to favour him in his boxing matches OF ALL TIME.

Still, many Twitterians stood up for  Mayweather, noting that he made a rational decision by demanding boxing rules, as he has always trained as a boxer.

Common sense makes him a pussy? Stfu already the man is undefeated and cemented as one of if not the greatest of all time. Learn some respect and leave your infantile comments at home. Attempt to think logically

He’s not stupid, nobody would pay for a fight with them in the octagon Floyd would get kilt

One user noted that because Khabib called out Mayweather, he should be the one to have to adapt to the rules.

Several Twitter users blasted the renowned boxer for allegedly caring only about money and not the sport itself.

No longer able to generate the numbers in boxing so has to hope for a freak show.

Why people even giving him the time? Is anybody else offended by him disrespecting the sport of mma,trying to make a quick dollar. I love this sport,someone like him exploiting it is ridiculous.

'We Can Make it Happen': Twitter Wild as Mayweather Accepts Khabib's Challenge