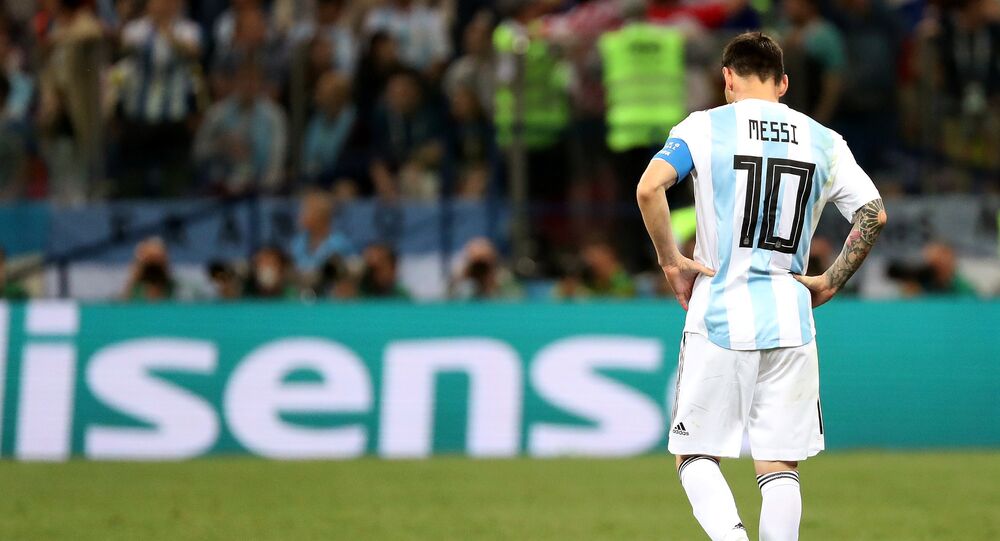 Story of Messi's Disappointing Performance for Argentina as He Leaves Russia

Lionel Messi and Argentina suffered a heartbreaking defeat at the hands of the French national team on Saturday. It was one of many disappointing moments of Messi’s career with Argentina’s national team.

Barcelona superstar Messi was unable to shine in this tournament, as he only scored once during the World Cup in Russia.

Argentina lost to France 4-3 in the knockout stage.

Messi, who turned 31 last week, had a good chance to bring Argentina back to its past glory and win a major tournament.

© Sputnik / Maksim Bogodvid
French Fans Watching Match Against Argentina in World Cup's Round of 16 (VIDEO)
However, his lucky stars didn’t follow him to Russia, as he had a sloppy start in the first game against Iceland, when he missed a penalty. The match ended in a draw 1-1.

Messi had some luck in the match against Nigeria with an opening goal. Argentina won that game 2-1.

In the match against France Messi could not demonstrate his skills and at the end of the game his team lost.

Back in 2016 Messi wanted to leave the national team after Argentina lost a second Copa America final. However, he later changed his mind.

© REUTERS / Albert Gea
'A True Genius': Argentine Football Coach Instructs Team to Be on Messi's Level
"I've done all I can. It hurts not to be a champion," Messi said at the time.

Less than two months later he reversed that decision. "We need to fix many things in Argentinean football, but I prefer to do this from inside and not criticize from outside," he said.

In the 2014 World Cup Messi scored four goals and reached the semi-finals, but due to an injury he was limited to short bursts of energy and ultimately ran out of steam in a 1-0 extra-time defeat by Germany.

Although Messi won the Golden Ball for the best player of the tournament, it did little to ease the pain of getting so close to following in Maradona's footsteps for his country.

Now that dream is even more distant for the football star.