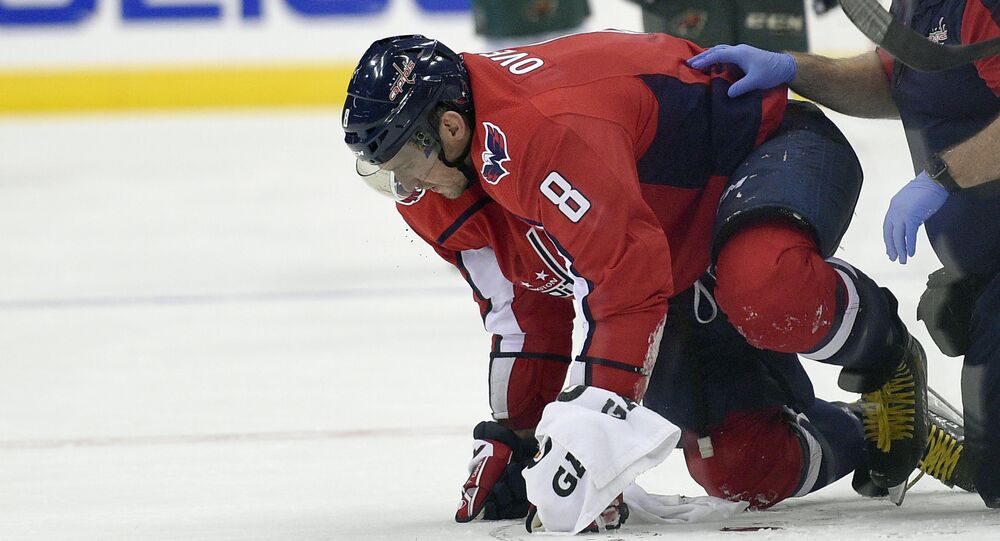 Russian hockey great and Washington Capitals' captain Alexander Ovechkin had to get several stiches on his upper lip after being hit directly in the face by a puck during a game against the Minnesota Wild Saturday night. The player returned to the ice for the third period, and even joked about the incident.

Ovechkin, known as Ovi by fans, took the hit to the face from Wild forward Chris Stewart during an intercept gone wrong in the second period, the puck hitting him just below his helmet visor. The traumatic moment was caught on video.

Alex Ovechkin deflected the puck into his face, left the ice to get stitched pic.twitter.com/lT4fAJMdWq

Ovechkin takes puck to the face. 🤕

The hockey great lay coiled in pain for almost a minute, bleeding all over the ice before getting up and heading off to the locker room. Fans sighed in relief after he returned for the third period with several stiches on his lip.

"Just try to feel my tooth, and it's fine," Ovechkin said in a postgame interview, brushing off the injury. "Just moving a little bit, but it's fine. It's hockey," he added.

Ovechkin left the match to get stitches in his face after taking a puck to it. Then came back and went back into the game. Hockey players. You have my respect and I'll never cut in a line that you're in.@NHL

Playing off his famous line "I'm okay; Russian machine never breaks," which he adlibbed during another puck to the face injury from 2006, Ovechkin quipped that after Saturday's incident he was just "Changing oil."

Just another reminder that Alex Ovechkin is a machine. https://t.co/2iZGKxyoEc