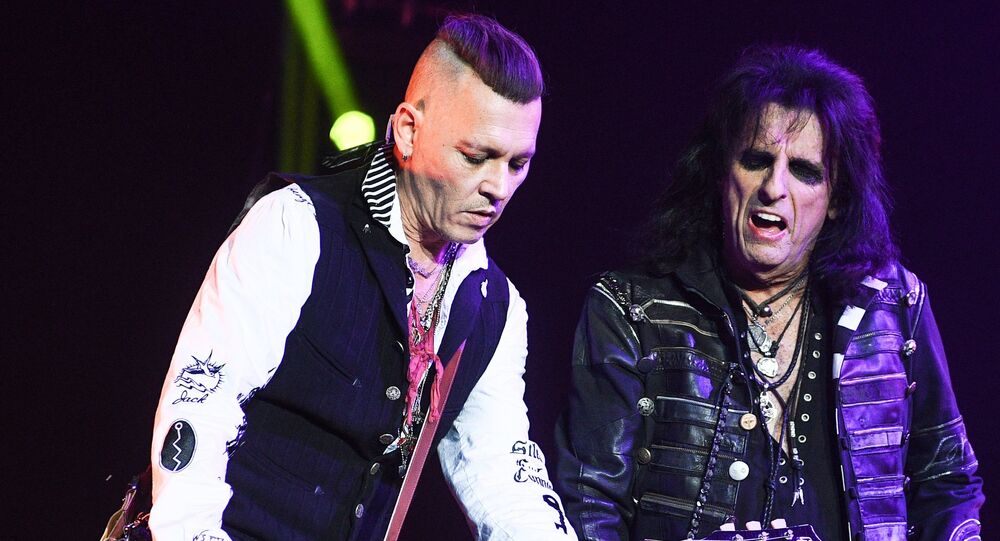 The musician is the latest celebrity to back Depp in his much-publicised divorce against actress Amber Heard, who claimed he was verbally and physically abusive towards her during their relationship. Depp has denied the accusations and filed a $50 million lawsuit against his ex-wife.

Rock Star Alice Cooper has defended Johnny Depp over accusations that the Hollywood actor was violent towards his ex-wife Amber Heard. The three-time Grammy nominee, who plays with Depp and Aerosmith guitarist Joe Perry in a supergroup, Hollywood Vampires, said he can’t imagine that his good friend would do the terrible things Heard has accused him of.

"Johnny is one of the sweetest people I’ve ever met. He is the most harmless human being I’ve ever met, so I’m not buying into all of the other stories because I know him and everybody else who knows him knows that," he told PageSix.

Since Depp launched a legal battle against his ex-wife, various celebrities have expressed support for the Pirates of the Caribbean star, including Oscar winners Sir Mark Rylance and Penelope Cruz, his ex-wife Vanessa Paradis and ex-girlfriend Winona Ryder.

What Are the Accusations?

Depp met Heard on the set of The Rum Diary and they started dating in 2012 after he divorced Vanessa Paradis, who he had lived with for 14 years and with whom he has two children. The couple tied the knot in 2015, but 15 months later Heard filed for divorce citing domestic abuse. The actor categorically denied the accusations. Eventually the pair reached a $7 million settlement that said that their marriage had been bound by love and that there had been no intention to cause physical or emotional harm.

In 2019, Heard penned a comment in the Washington Post, where she spoke about being the victim of domestic violence. Though Depp was not mentioned in the article, he nevertheless sued his ex for $50 million, saying it was clear she meant him.

How Did Depp Respond?

As mentioned, the actor has categorically denied accusations against him, arguing that they are an elaborate hoax to promote Heard's career. Depp and his legal team argued that Heard painted her bruises and alleged that she herself was violent during the relationship.

An audio tape obtained by the Daily Mail seems to have corroborated this hypothesis. In the audio Heard can be heard saying that she had hit Depp and started fights.

"I'm sorry that I didn't, uh, hit you across the face in a proper slap, but I was hitting you, it was not punching you. Babe, you're not punched. I can't promise that it will all be perfect. I can't promise you I won't get physical again. God I f**king sometimes I get so mad I lose it. I can f**king promise you I will do everything to change. I promise you”, Heard was recorded as saying.

Besides a defamation suit against Heard, Depp also sued the publishers of the Sun tabloid over an article, which described him as a "wife beater". He lost the case with the judge ruling that the claims in the article were "substantially true". He highlighted three incidents in which he said Depp had put Heard in "fear for her life".

Depp’s legal team appealed the verdict, but a High Court did not accept it. His defamation case against hear is scheduled for April 2022.