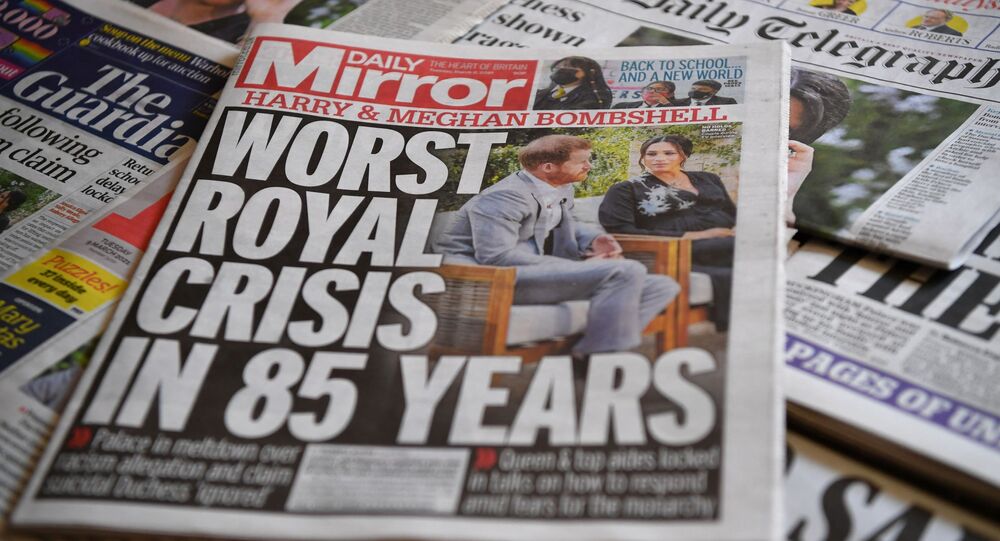 Half-Sister Claims Meghan Markle's Marriage Will End 'in Divorce', Unless 'Damage' Is Undone

The Duchess of Sussex said in her explosive recent CBS interview with Oprah, among many things, that her older half-sister "doesn't know" her and that she was raised as an "only child." However, these claims were dismissed as "not true" by her half-sister, who shared a series of joint photos taken over the course of many years.

Meghan Markle's paternal half-sister, Samantha, alleged that her marriage to Prince Harry will end in divorce unless they receive "extensive counseling" and work towards apologizing to anyone they might have hurt, adding that they "have not been honest."

"I see it ending in divorce unless they get extensive counseling and can agree to work on being honest, to work on apologies to everyone that they've damaged in the course of this bull in a china shop two-year spiel," Samantha Markle spoke out on Monday about the royal couple's marriage in her interview with TMZ. "I mean, nothing about any of this has been honest, and the damage to the Royals has been massive - especially now."

The older Markle sister suggested that Prince Harry could be "questioning" the marriage, and it may "get nasty" unless he "starts dissenting or pulling back from her."

"Maybe he's already questioning it, he has to be if he has a functioning frontal lobe. Come on, he's not 12," she presumed. "What man would be happy or comfortable like that? And the minute I believe he starts dissenting or pulling back from her, I think it can get nasty unless he has a really good lawyer or they have really good counselors."

The 56-year-old half-sister of the Duchess even called for the Sussexes to go on an "apology tour" following the couple's tell-all interview with Oprah Winfrey in which they also accused the royal family of racism.

Samantha has also accused Meghan of having a "narcissistic personality disorder," claiming that she "did a lot of damage" to their father Thomas Markle while demanding a public apology from her half-sister.

"She would have to apologize - a public apology, god, I know would be like getting blood from a rock but she did a lot of public damage. Really, I mean I really feel like this thing was all orchestrated that she needs to unravel the damage," she added. "She did a lot of damage to a man who gave her an incredible life - so hurtful, so wrong. She would need to make the first move and, I mean, you know, parents are always unconditionally loving but god, she really hurt him."

Samantha Markle also admitted that she has no sympathy for 39-year-old Meghan, who revealed during the interview that she struggled with suicidal thoughts during her tenure as a senior member of the British royal family, accusing Meghan of using her "depression as an excuse for treating people like dishrags."

With regards to Meghan's comments about the Markle family and growing up alone, Samantha said earlier in a follow-up interview that she was surprised to hear her half-sister make such a claim, sharing during the show joint photos taken presumably throughout decades.

"I don't know how she can say I don't know her and she was an only child. We've got photographs over a lifespan of us together. So how can she not know me?" she asked.

Moreover, in the interview, Meghan Markle alleged that Samantha only changed her last name back to Markle after the younger sister began dating Harry, implying that her half-sister was attempting to profit from the public's fascination with her name. Samantha, on the other hand, maintained that this assertion was completely false and allegedly provided additional facts to back her up, namely the petition for changing her name and a bachelor's degree diploma with the name Samantha M Markle on it.

"I was a Markle before she was," she said. "I thought that was kind of weird that she would say I only changed my name back when she met Harry. Markle has always been my name."

Prince Harry and Meghan Markle made a series of allegations about their time as working royals during the almost two-hour interview. The Duke and Duchess of Sussex claimed that there was concern within the royal family over the skin color of their future children, as well as a lack of mental health support as the pair faced a "constant barrage" of negative press coverage.

The Sussexes stepped down from their senior royal duties in January 2020 to achieve "financial independence" and have since relocated to the US state of California.