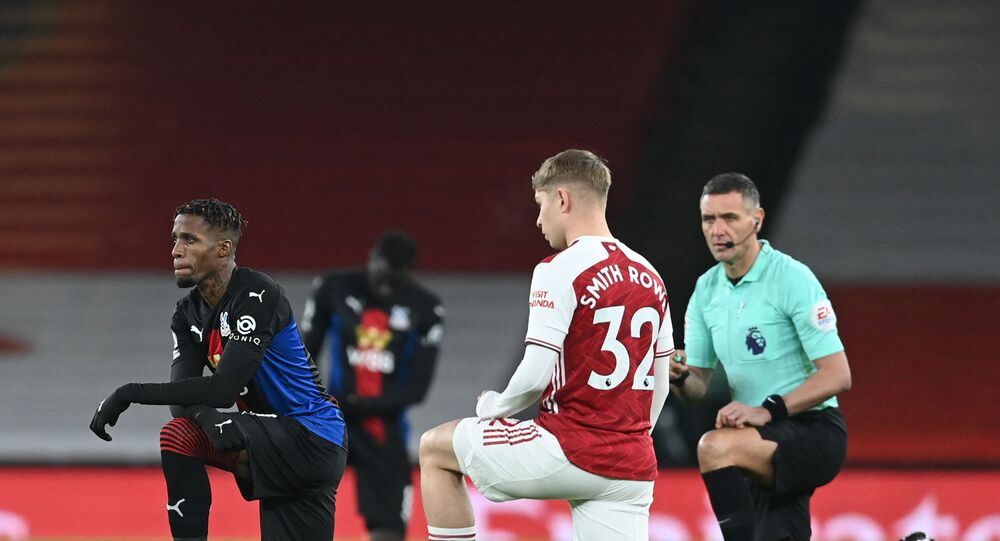 The athlete has more than once been the victim of racial abuse. Last summer a 12-year-old boy was arrested after making racist threats to Zaha on social media by sending him an image of the white supremacist group Ku Klux Klan.

Crystal Palace’s forward Wilfried Zaha says it is "degrading" to a take the knee before every Premier League game and wear the Black Lives Matter logo. The 28-year-old believes that these actions are not enough to eradicate racism.

"The whole kneeling down - why must I kneel down for you to show that we matter? Why must I even wear Black Lives Matter on the back of my top to show you that we matter? This is all degrading stuff," Zaha said during an interview with "On The Judy Podcast".

The athlete believes that more should be done by major companies and organisations to deal with the issue of racial discrimination. To Zaha, everything that has been done is all talk, but no action.

"When people constantly want to get me to do Black Lives Matter talks and racial talks and I'm like, 'I'm not doing it just so you can put "Zaha spoke for us", like a tick box', basically. I'm not doing any more unless things change. I'm not coming to chat to you just for the sake of it, like all the interviews I've done. All these platforms - you see what's happening, you see people making fake accounts to abuse black people constantly, but you don't change it. So don't tell me to come and chat about stuff that's not going to change. Change it," the forward said adding that "all these charades mean nothing".

The athlete, who played for Manchester United before he was lent to Crystal Palace, previously said he was scared to open his Instagram because of the torrent of racist messages he received and ended up deleting his account on Twitter as the number of hateful messages was unendurable.

Why Do Football Players Kneel?

Since the football season restarted last year, athletes in the Premier League have 'taken the knee' before the beginning of matches. The move was introduced after the death of African-American George Floyd to protest against police brutality in the United States. Floyd had died at the hands of a white police officer after being arrested because of a fake banknote. During the arrest, officer Derek Chauvin knelt on Floyd’s neck and kept doing so even after Floyd told him he couldn’t breathe and became unconscious.

Since the protests, many athletes around the world have started kneeling to show solidarity with victims of racial discrimination and the move was also used as a peaceful protest against racism.

Wilfried Zaha’s statement comes as leaders of English football bodies, including the Football Association and the Premier League, recently urged big tech to show "basic human decency" and to do more to eradicate racism from their platforms.

"The language used is debasing, often threatening and illegal. It causes distress to the recipients and the vast majority of people who abhor racism, sexism and discrimination of any kind. We have had many meetings with your executives over the years but the reality is your platforms remain havens for abuse. Your inaction has created the belief in the minds of the anonymous perpetrators that they are beyond reach," reads the letter addressed to chief executive of Twitter Jack Dorsey and Facebook chief executive Mark Zuckerberg.

The proposals were made after more people opened up about abuse on social media. Newcastle manager Steve Bruce said people sent him death threats on social media, and referee Mike Dean said his family received threats after he showed red cards to several players.