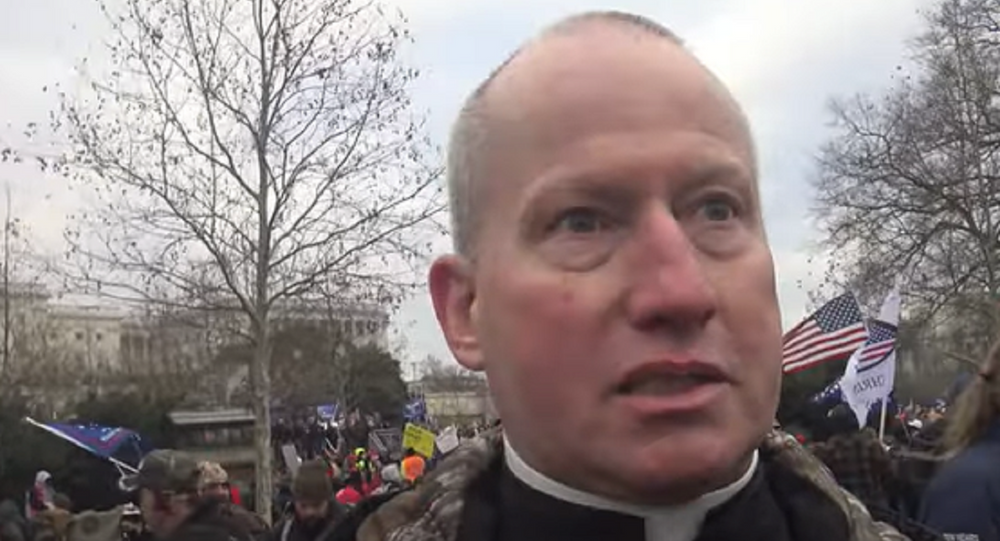 US Priest Under Fire for Performing ‘Exorcism’ on Capitol During Riots

Former US president Donald Trump loyalists on January 6 breached the Capitol building in Washington, DC, to protest against the certification of the Electoral College and to challenge the confirmation of Joe Biden as the winner of the 2020 presidential election.

Reverend David Fulton, a Nebraska priest, is being scrutinized by the Catholic church after being caught on video the day of the Capitol riot saying he was performing an exorcism on the building. An exorcism involves the expulsion of a supposed evil spirit from a person or place.

The video of Fulton saying he was performing an exorcism was captured by DC-based independent videographer Eddie Becker.

In a statement to the Omaha World-Herald, Deacon Tim McNeil, the chancellor for the Archdiocese of Omaha, revealed that the incident is an “internal personnel matter” being taken “seriously.”

“He should not have been there dressed as a priest. It was a misuse of his priestly ministry,” McNeil told the Omaha World Herald.

According to the Washington Post, Fulton read an apology on Sunday at the St. Michael’s Catholic Church but also stated that the video in which he said he performed an exorcism at the church was taken out of “context.”

In his apology, Fulton also revealed that he didn’t perform an exorcism but rather “led others in prayer,” while denying entering the Capitol during the insurrection.

“I used bad judgment in participating in the rally in Washington, DC, on Jan. 6, 2021,” Fulton said. “I spoke and acted in a way that was not consistent with my vocation as a priest. I acknowledge that the confusion and hurt that I caused to you, to the church and to the other members of the community.