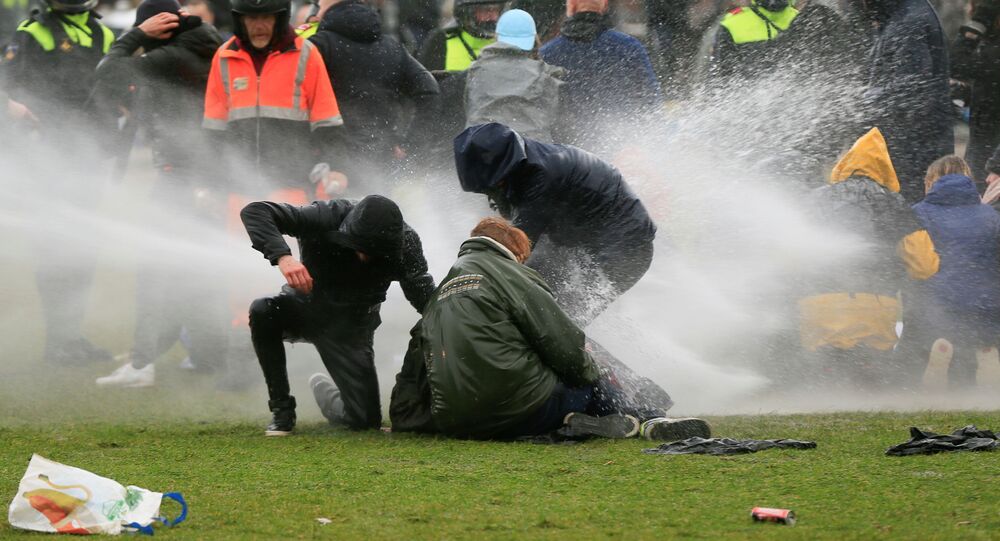 Earlier, the Dutch government extended the almost full lockdown introduced on December 15 until February 9. It orders all non-grocery and non-essential shops to close, shutting down all cafes, museums, theaters, pools, gyms, barbers and other public venues. Also, it calls for all educational facilities to operate remotely.

At least 190 people were detained in Amsterdam in connection with rioting during Sunday's demonstrations against government measures to combat COVID-19, the local police of the Netherlands' capital city stated.

"190 arrests after the demonstration on Museum Square, 33 arrests (seven of them minors), mainly for committing open acts of violence, 142 arrests in connection with violation of municipal legislation and 15 arrests for violating article 184 [on disobeying police orders]," the statement posted on Twitter reads.

​Dutch police used water cannons and, reportedly, tear gas to disperse anti-lockdown protesters in the cities of Amsterdam and Eindhoven, since some of the protesters threw firecrackers and projectiles at officers.

​As may be seen on videos that were being shared on social media, the demonstrations got out of control in some places, as protesters began to smash shops and cafe windows, rob stores and build barricades on city streets in order to apparently complicate the movement of police vehicles.

Anti-lockdown protest today in Dutch city of Eindhoven turns violent. This being the Netherlands the barricades consist, naturally, of bicycles.pic.twitter.com/RcNNTiYB6G

A car was set on fire on the streets of Eindhoven.

A video posted on Twitter shows one of the rioters tossing the bicycles parked near an apartment building and then putting them back after being yelled at by an owner.

Typical for the Netherlands. Rioter in #Eindhoven puts bicycle back because the owner shouts at him from a balcony.
pic.twitter.com/ntxjhSiRkH

About 1,500 people reportedly participated in the Sunday protests against coronavirus restrictions in Amsterdam. The protest was dispersed on Sunday afternoon because of COVID-19 concerns.

​The extended lockdown implemented by the Dutch authorities is accompanied by an unprecedented measure to impose curfews throughout the country, which occurred for the first time since World War II.

Between 21:00 and 4:30 local time, the curfew will be in place and residents must remain at home between these hours. For carers, dog walkers, and people going to work, exceptions apply.

About 100 People Report Side Effects After Pfizer Vaccine Shots in Netherlands, Reports Suggest