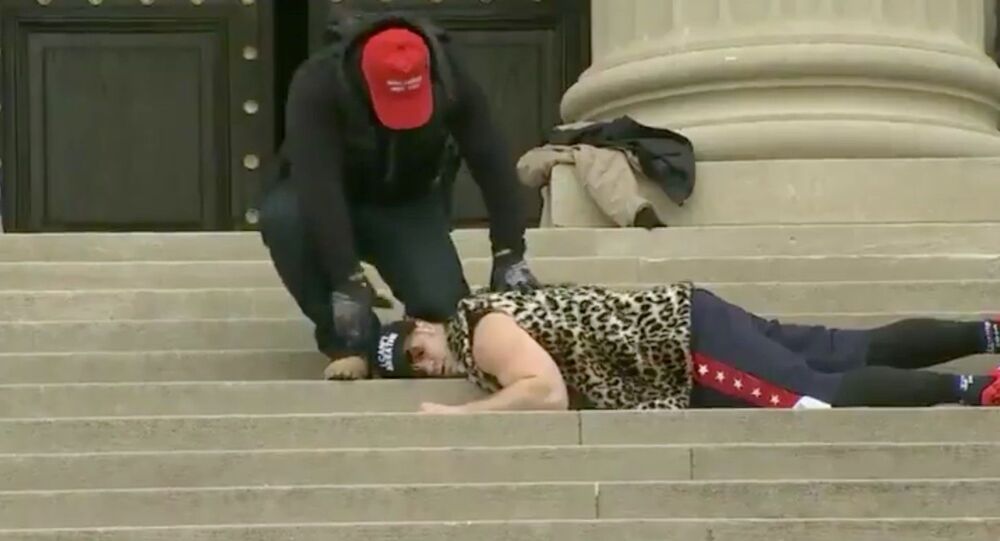 Minnesota man George Floyd was killed in May 2020, after Minneapolis police officer Derek Chauvin knelt on Floyd’s neck for several minutes despite his pleas that he couldn't breathe. Floyd’s death stirred outrage and became a rallying cry for protesters demanding justice over the continued targeting of Black Americans by law enforcement officials.

As thousands of protesters arrived in Washington, DC, on Wednesday for the “Stop the Steal” rally, two particular individuals caught the attention of many after deciding to imitate Floyd’s death underneath an unfurled Black Lives Matter banner.

The incident took place on the steps of the prominent National City Christian Church on the city’s Thomas Circle. Earlier, Rev. Dr. Amy Butler, interim senior minister of the church, told NBC News that the church decided to unveil the 16-foot banner to make it known to incoming protesters that the institution rejected violence.

Video emerged Wednesday afternoon that showed one individual lying facedown on the church steps as a second masked individual sporting a “Make America Great Again” hat appeared to kneel on him. The person lying on the ground is wearing a hat that reads "I can't breathe" - words that were repeatedly uttered by Floyd before he died.

Anthony Mague, an executive producer for local news station NBC 4, noted in a tweet that the incident unfolded “moments” after the church unveiled the banner.

The imitation was immediately condemned on social media, with Twitter users remarking the pair were “awful people” and that the recreation was “disgusting.”

“And there we have it. What Trumpism has always meant: racism and performative cruelty,” wrote another netizen.

Within hours of the incident, dozens of protesters in town for the rally kicked things up a notch and broke past security barriers set up outside the US Capitol. At the time, lawmakers had just undertaken initial efforts to certify the Electoral College results, with both chambers less than an hour into debates over the first objection made by Republican officials.