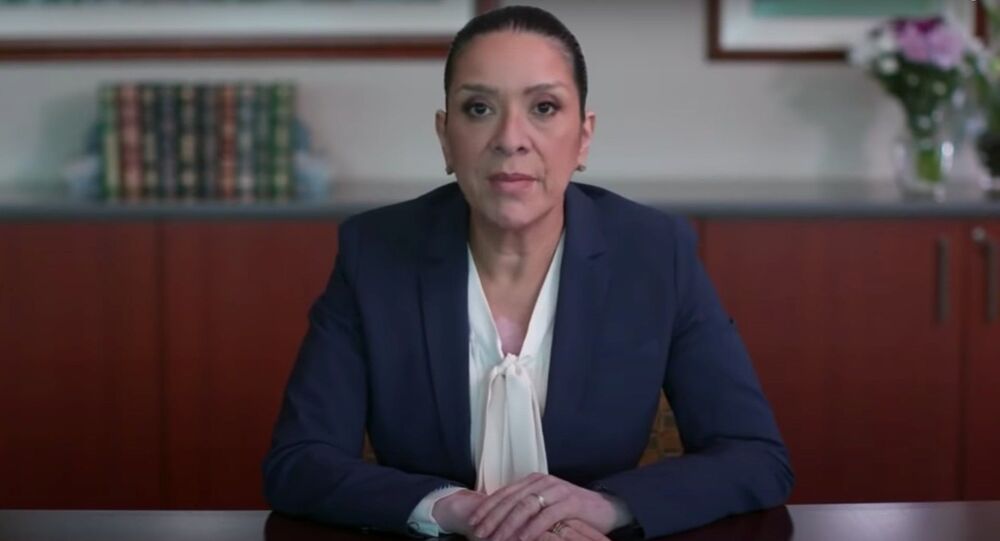 Video: US Judge Whose Son Was Killed by 'Madman' Calls for Stronger Judicial Protections

Federal US Judge Esther Salas made her very first public statement Monday, weeks after a gunman disguised as a FedEx deliveryman killed her son and severely wounded her husband.

Salas’ video statement to the public called on US lawmakers to work toward providing increased privacy protections for federal judges in an effort to make it more difficult for them to be tracked down by disgruntled individuals.

“Two weeks ago, my life as I knew it changed in an instant, and my family will never be the same. A madman, who was targeting me because of my position as a federal judge, came to my house,” she said.

“As federal judges, we understand that our decisions will be scrutinized and some may disagree strongly with our rulings. That comes with the territory, and we accept that, but what we cannot accept is when we are forced to live in fear for our lives because personal information, like our home addresses, can easily be obtained by anyone seeking to do us or our family harm.”

Salas’ video statement also detailed the events that unfolded prior to the July 19 shooting at her New Jersey home. She described the weekend birthday celebration for her 20-year-old son Daniel Anderl as one “filled with love and laughter and smiles.”

“The weekend was a glorious one,” she noted before recalling the moment that the gunman, believed to have been 72-year-old disgruntled lawyer Roy Den Hollander, rang the doorbell and subsequently shot Salas’ son and husband, Mark Anderl.

At the time the doorbell sounded, Salas and her son were in the basement. She stated in the video that “before I could say a word, [Daniel] sprinted upstairs. Within seconds, I heard the sound of bullets and someone screaming, ‘No!’”

“I later learned that this monster who had a FedEx package in his hand opened fire, but Daniel being Daniel protected his father and took the shooter’s first bullet directly to his chest,” she said. “The monster then turned his attention to my husband and began to shoot at my husband, one shot after another.”

Mark was shot three times, once each in the right side of his chest, the left side of his abdomen and his right forearm. “While my husband is still in the hospital recovering from his multiple surgeries, we are living every parent's worst nightmare - making preparations to bury our only child, Daniel,” she said.

Salas stated that the gunman “had a complete dossier on me and my family,” knowing full well where the family lived and attended church in New Jersey’s North Brunswick area.

“My son’s death cannot be in vain, which is why I am begging those in power to do something to help my brothers and sisters on the bench. Now, more than ever, we need to identify a solution that keeps the lives of federal judges private,” she said.

Although Salas did acknowledge that the matter would be a “complicated issue,” Sen. Robert Menendez (D-NJ), who recommended Salas for the federal bench ahead of her 2011 appointment, revealed Monday during a news conference on an unrelated topic that he was drafting legislation on protecting judges.

“If a federal judge has to worry that his or her decisions at the end of the day could cause a loss of the life of a loved one, then I’m not sure how that full independence - even when one works hard to maintain it - can ever be achieved,” Menendez said. “No federal judge should have to worry about the writs that they issue, the decisions that they make.”

Following the shooting, an investigation found that Den Hollander had died by a self-inflicted gunshot wound. A search of his rental car revealed that he had a list of more than a dozen potential targets that included Salas and three other female judges.

According to the New York Times, Den Hollander, an avowed men’s rights activist, is alleged to have targeted Salas because she failed to move fast enough on a lawsuit that he’d filed earlier. The Times has also indicated that in Den Hollander’s manifesto, the lawyer vowed to challenge “feminazis.”

Den Hollander, who was the only suspect in the New Jersey shooting, has also been named as a person of interest in the July 11 killing of lawyer Marc Angelucci; Den Hollander was allegedly infuriated after a federal court in Texas ruled in Angelucci’s favor in a case similar to one Den Hollander had filed.