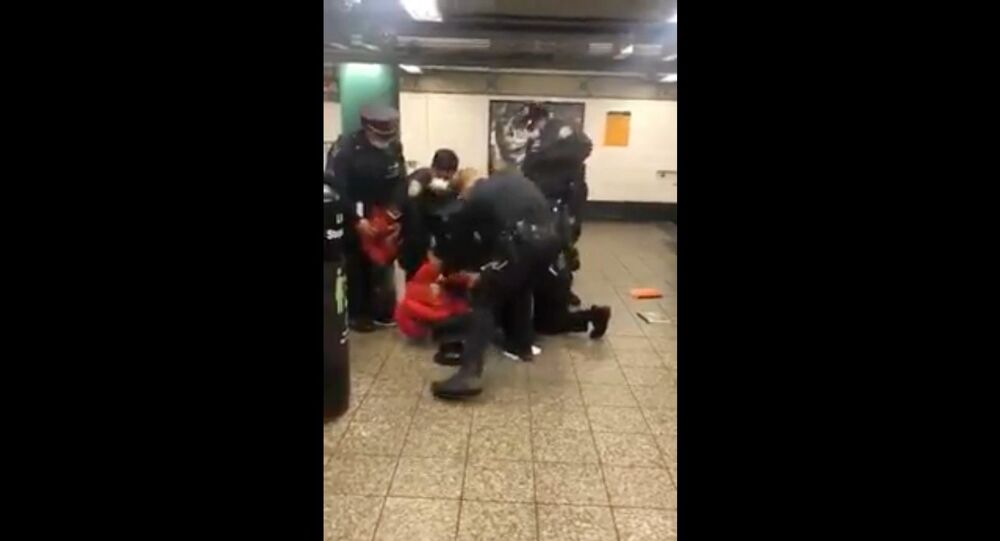 Officers with the New York Police Department (NYPD) have come under fire once again after newly surfaced cellphone footage documented the violent arrest of New Yorker Kaleemah Rozier, who was confronted by cops over her improper use of a face mask at a subway station.

The incident unfolded before noon on Wednesday, when the Brooklyn mother and her young child were waiting for the next train at the Atlantic Avenue-Barclays Center subway station.

Tensions between Rozier and law enforcement officials initially escalated once the mother was asked to pull her mask from under her chin and place it over her nose and mouth; however, the heated exchange was quickly kicked up a notch after she made remarks about coughing on an officer and was asked to leave the station.

Video of the altercation, recorded by a bystander, begins as police confront Rozier a second time, after she disregarded police commands and attempted to reenter the subway station. Several officers are seen surrounding Rozier and her child. At one point in the recording, an official is heard saying, “she cannot stay [in the station].”

“What the f**k is y’all talking about?! Don’t touch me! Do not touch me,” Rozier is later heard saying as an officer appears to motion toward her. Within seconds, multiple officers surround Rozier, with one cop placing the mother in a body lock as two others attempt to grab a hold of her arms.

“This is unnecessary,” one commuter off-camera can be heard telling the officers. “She got a kid with her. She got a baby with her … that’s too much, man.”

Video shows that as four officers work to restrain Rozier, a fifth cop is seen standing to the side with Rozier’s child, who also appears to be wearing a face mask under his chin. A sixth cop is filmed standing over the scuffle.

Rozier was ultimately taken into the precinct and charged with resisting arrest, disorderly conduct and harassment in addition to being handed a desk appearance ticket, according to the New York Daily News, which reported that her child was picked up by their father.

The altercation was addressed by NYPD Commissioner Dermot Shea early Thursday during a news conference. At the event, Shea told reporters that Rozier had told officers that she was “going to cough on all of you [officers],” and that she immediately began cursing after being spoken to by officers. Rozier reportedly later apologized for her reaction.

“I’ll be honest: I just feel sad about that entire event, for the cops’ perspective and for the woman’s perspective," Shea said, referring to Rozier’s arrest. "I feel terrible about it.”

However, speaking to the Daily News, Rozier disputed Shea’s account of the incident, telling the outlet that she had only told one officer that she was going to cough on them in a bid to get officers to leave her alone.

She also indicated that she’d been wearing the mask properly prior to the confrontation, but had only pulled it down to use her cellphone. “They wanted me to put the mask over my face, and I was on the phone,” Rozier said. “I just kept walking. They followed me and that’s when people started recording.”

Rozier’s arrest comes amid a series of tense interactions between law enforcement officers and residents over measures meant to prevent the spread of the COVID-19 coronavirus. Elsewhere in the Empire State, police efforts recently came under investigation after a social distancing arrest led to a brutal beatdown of a local man.