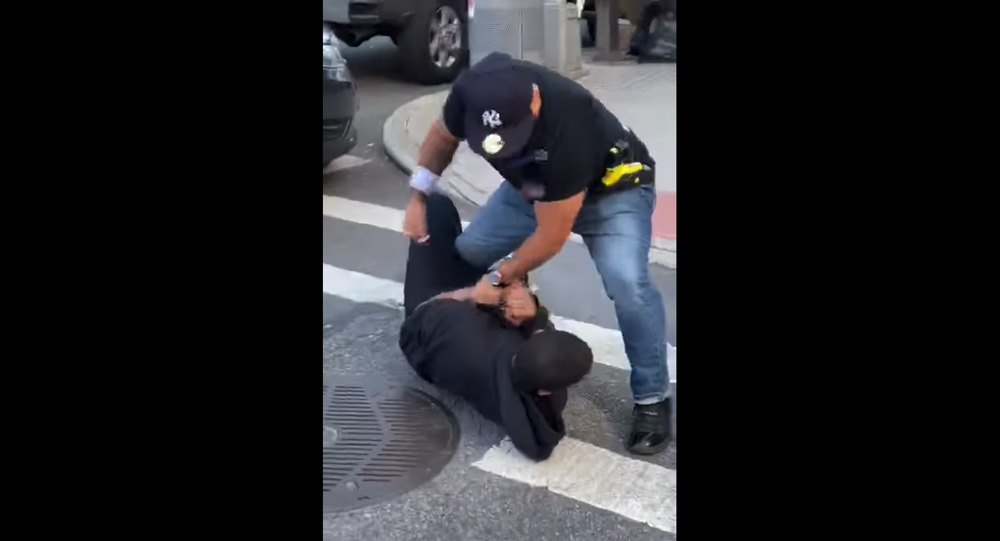 A plainclothes officer with the New York Police Department (NYPD) was recently placed on modified duty and stripped of his gun and badge after a cellphone recording surfaced, showing the cop violently attacking a local resident who was seen approaching the vicinity of an ongoing arrest.

The Saturday altercation was captured by New Yorker Daquan Owens, who was one of several individuals in Manhattan’s East Village that walked over to the corner of East Ninth Street and Avenue D at about 5:30 p.m. local time to determine why officers were making an arrest.

Owens’ recording of the incident begins with the focus on the sudden arrest of Shakiem Brunsom and Ashley Serrano, who were both confronted by officers for reportedly refusing to maintain social distancing measures and ignoring orders to disperse.

Multiple people are seen approaching the scene, and Serrano can be heard repeatedly yelling out that she hadn’t done anything to warrant the police response. However, more than 30 seconds into the recording, the focus shifts to officer Francisco Garcia’s tense interaction with 33-year-old Donni Wright.

“Get back. Get the f**k back,” Garcia says as he’s seen brandishing his department-issued stun gun. “Move the f**k back. What you flexing for? Don’t flex.”

Seconds after his last remarks, Garcia pushes Wright down onto a crosswalk before slapping him across the face and punching him in the shoulder. After dragging Wright back onto the sidewalk, Garcia is seen punching the 33-year-old local once more before placing his left knee on Wright’s neck and upper back.

“He didn’t even do anything,” multiple individuals can be heard saying off camera. “We got all that [on camera].”

The recording cuts off with Garcia eventually walking away from the scene after additional officers arrive and take over the arrest.

Additional footage also surfaced online showing the interaction between plainclothes officers, including Garcia, and arrestees Brunsom and Serrano. It’s worth noting that Garcia, who was helping to enforce social distancing measures, was not wearing a facemask throughout the arrest.

Although the majority of the released security footage offers a deeper insight into the initial arrest, it cuts off as Garcia is seen approaching Wright.

NYPD spokesperson Sgt. Mary Frances O’Donnell told the Associated Press in a Sunday story that Wright had been zeroed in on by Garcia after he took a “fighting stance against the officer,” an alleged move which is not seen on either of the released recordings.

Speaking to the Gothamist, Owens told the outlet that Wright did not exhibit any aggressive behavior before the encounter. “He was just talking. He never raised his hands or hit him. Cop just took it upon himself to start beating on him. I was standing right next to him. I could hear everything,” he recalled.

Though Wright was subsequently hit with charges that included assault of a police officer, menacing and resisting arrest, those charges have been deferred pending an investigation into the arrest, the AP reported, citing a spokesperson with the Manhattan District Attorney’s Office.

New York City Mayor Bill de Blasio addressed the violent altercation Sunday, writing on Twitter that the “behavior I saw in that video is simply not acceptable.”

​He further confirmed that Garcia was placed on “modified duty,” and that an investigation has been launched into the matter.

As for Brunsom and Serrano, the New York Post reported that the pair were hit with a variety of charges, including resisting arrest. Brunsom was also charged with possession of marijuana, whereas Serrano received a charge of criminal possession of a weapon for a stun gun she reportedly had on her person.