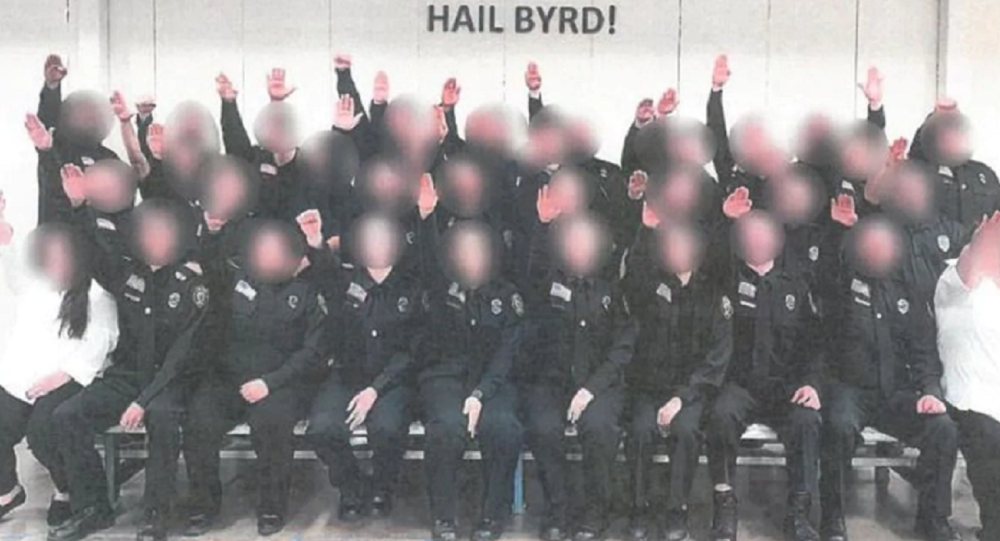 A disturbing photo of West Virginia Division of Corrections and Rehabilitation employees doing a Nazi salute during a training class has been made public.

In the photo, about 30 participants can be seen doing the straight-armed salute, a greeting gesture that was used to express obedience to Adolf Hitler in Nazi Germany and continues to be used by like-minded fascist groups up to the present day. The photo was taken during a training class conducted between October 21 and November 27.

​“I have seen the photo of Basic Training Class Number 18. I condemn it in the strongest possible terms," Jeff Sandy, the cabinet secretary for the West Virginia Department of Military Affairs and Public Safety, told employees in a Wednesday letter titled “Conduct Unbecoming by Members of DCR.”

"It is distasteful, hurtful, disturbing, highly insensitive and completely inappropriate,” he continued. "It betrays the professionalism I have seen time and time again displayed and practiced by our brave correctional employees."

Sandy also noted that all copies of the photograph would be destroyed “to keep harm from spreading.” However, the letter does not provide any information on the identities of the individuals photographed or how the image was uncovered.

The letter also notes that a number of employees have been suspended as the investigation continues.

In a statement released Thursday, West Virginia Governor Jim Justice wrote that he condemns the photo “in the strongest possible terms.”

“I have directed Secretary Jeff Sandy of the Department of Military Affairs and Public Safety to continue actively investigating this incident and I have ordered the termination of all those that are found to be involved in this conduct,” Justice added. “This will not be tolerated on my watch – within the Division of Corrections and Rehabilitation – or within any agency of state government.”

“As someone who has worked to build bridges with our local Jewish community, I know how harmful and offensive horrible displays like this can be, and my heart breaks for my friends who will be deeply affected by this," Kessinger said in a statement obtained by ABC 8.

Incidents involving Nazi symbols and salutes have become increasingly common. In August, a video surfaced of about 10 students at a California high school singing a Nazi marching song while giving the Nazi salute at an awards ceremony in November 2018. Photos of a group of high school students in Newport Beach, California, flashing the salute while standing over cups arranged in a swastika at a party in March also went viral on social media.

Anti-hate watchdog groups have reported a rise in far-right political activity as well as incidents of hate speech, attacks, and propaganda being seen in recent years. In two studies published in February and March of this year, the Anti-Defamation League reported a 182% increase in incidents of white supremacist propaganda being spread in 2018, and the Southern Poverty Law Center reported the steady growth in hate groups had reached an all-time high of 1,020 last year.