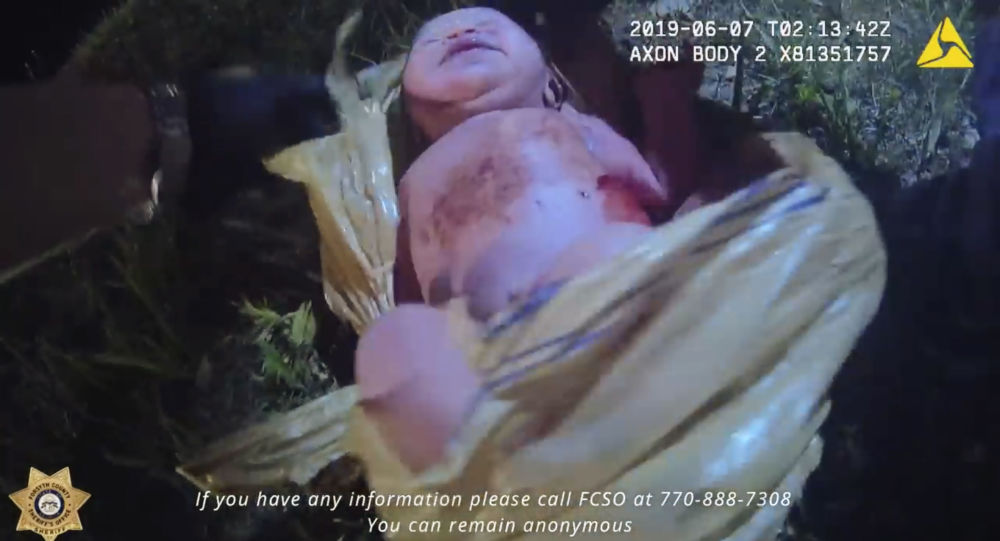 On Tuesday, a Georgia sheriff’s office released body camera footage showing a crying newborn baby girl being rescued from a plastic bag that had been left in the woods.

Hospital employees decided to name the baby India, who is “thriving and is in the care of the Georgia Department of Family and Children Services,” the sheriff’s office said.

"We release this footage in hopes to receive credible information on the identity of Baby India and to show how important it is to find closure in this case," the sheriff's office said.

Officials were alerted to the incident after concerned residents heard the child’s cries and called on local law enforcement.

"It was obvious that the baby was a newborn. We believe within hours of our discovery that the baby had been born," Forsyth County Sheriff Ron Freeman said.

The state of Georgia legally allows the safe surrender of newborn babies.

"Georgia Safe Haven Law allows a mother up to 30 days after the birth of an infant to drop that infant off at a hospital, a fire station, a police station, a sheriff's station," Freeman said, ABC News reported. "And as long as they turn it over to a person, a live human being, they cannot be charged with abandonment, cruelty to children. It is a way to make sure that a child like this is safely cared for."

Anyone with information about India’s identity or family is encouraged to call the tip line at 770-888-7308.

"We want to understand and find out how this baby was abandoned," Freeman said. "Thirty-two years, this is the first one I've had [a case] of an abandoned child in this manner."