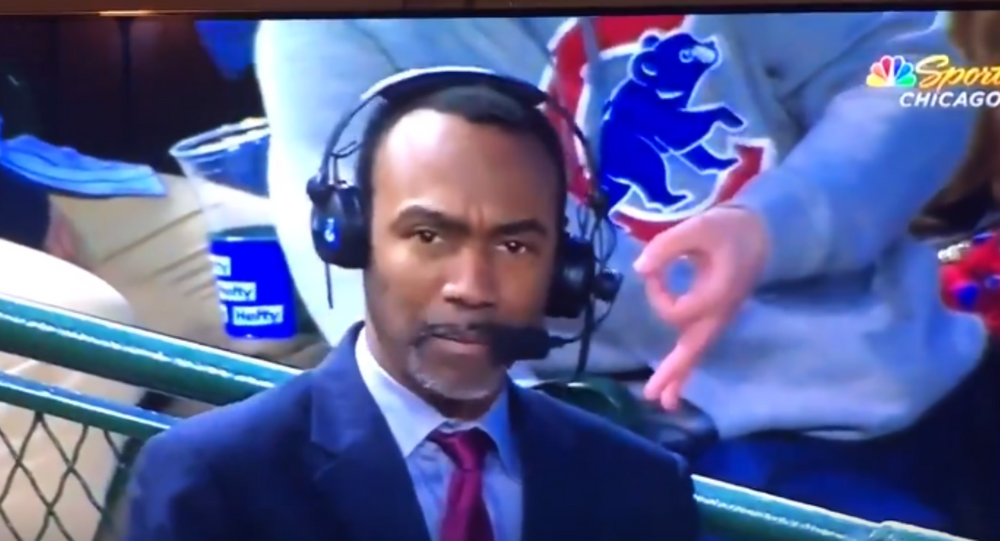 During a Tuesday night US baseball game between the Chicago Cubs and the Miami Marlins at Wrigley Field in Chicago, Illinois, a bearded Cubs fan wearing a team sweatshirt and blue pants formed his hand into a white power gesture as NBC Sports Chicago commentator Doug Glanville, who is black, praised the Cubs’ 5-2 win.

The gesture is performed by touching the tips of your forefinger and thumb together in an "O" shape, extending the other three fingers out straight and separating them, so that it looks like an upside-down "OK" sign. It has been associated with white nationalism in recent years, where it is used to represent the letters "w" and "p" for "white power."

​According to an Anti-Defamation League blog post, the history of the OK hand gesture as a secret symbol of white supremacy itself began as an online troll. "The ‘OK' hand gesture hoax originated in February 2017 when an anonymous 4channer announced ‘Operation O-KKK,' telling other members that ‘we must flood Twitter and other social media websites… claiming that the OK hand sign is a symbol of white supremacy.'" Though apparently launched as a way to mock "politically correct" culture, the line between mean-spirited humor and unironic use has been blurry from the start, as there's obvious overlap between those who think fears about white supremacy are overblown and those who sympathize with far-right politics, racial and otherwise.

​Videos of the incident quickly went viral on Twitter, with many users speculating that the gesture was just a reference to a children's game called the "circle game." In the game, the purpose of the gesture is to draw a person's gaze to it. If the person looks at the circle, you can hit them with your fist. In addition, in many parts of the world, the gesture is synonymous with the with the word "OK" and is used to indicate agreement or that all is well.

​"An individual seated behind Mr. Glanville used what appears to be an offensive hand gesture that is associated with racism," Crane Kenney, the Cubs' president of business operations, said in a statement Wednesday. "Such ignorant and repulsive behavior is not tolerated at Wrigley Field. We are reviewing the incident thoroughly because no one should be subjected to this type of offensive behavior."

In addition, Kenney added that team officials came to the conclusion that the gesture was intended to be used in a "racist way."

"We reached the conclusion that it's more likely than not that this person was using that hand signal as a racist way of interfering with everyone's enjoyment of the game," Kenney said. "That investigation has almost reached its conclusion. We'll have more to say about that in a little bit."

"We are disappointed by the incident that took place on our air last evening, one that was at the expense of our colleague Doug Glanville," Cross said in a statement following the incident. "We find the behavior of this fan reprehensible and clearly does not represent the great Cubs fans of our city and those around the country. We stand by our partners at the Cubs and will support their efforts regarding the investigation of this incident."

Mass Migration, White Supremacy and The Sanctimony of Liberal America

The Roots and Reality of White Supremacy in America