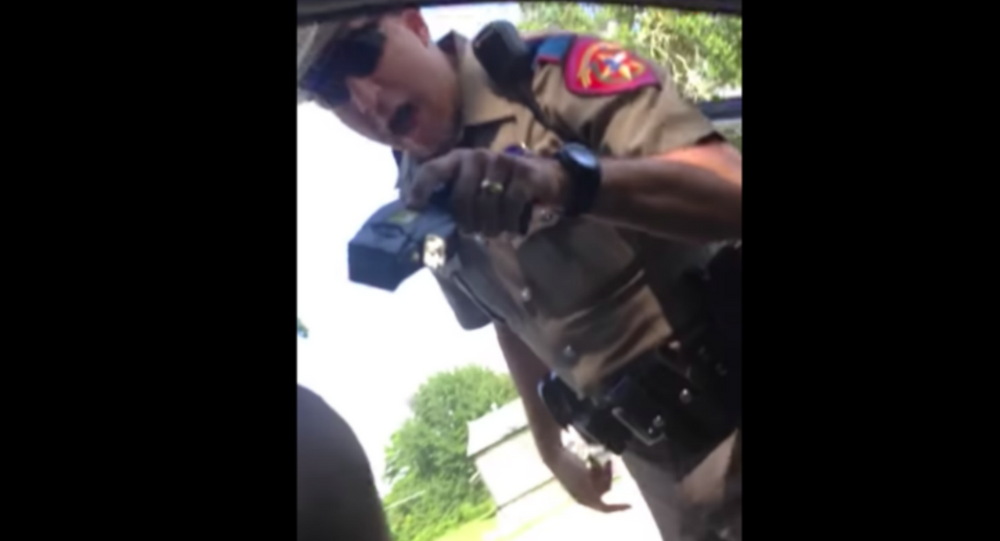 Almost four years after Sandra Bland was stopped by a Texas state trooper and then found dead in a jail cell three days later, cellphone video of the encounter taken by Bland herself has been released for the very first time, leading her family to call for a new investigation.

On July 10, 2015, the 28-year-old Chicago native was driving from Illinois to Texas to start a new job at Prairie View A&M University, her alma mater, when she was pulled over 50 miles northwest of Houston in Waller County by state trooper Brian Encinia for improperly signaling a lane change.

​She was detained after being arrested for allegedly becoming confrontational and posing a threat to Encinia's safety. Three days later, she was found hanged in her Houston jail cell. Her death was deemed a suicide, although her family maintains that Bland wouldn't have killed herself.

Before Bland's cellphone footage was released by Dallas television station WFAA-TV and the Investigative Network Monday, the only video evidence of the encounter was dashboard camera video from Encinia's car.

In the 39-second video from Bland's vantage point, she can be heard asking Encinia, "Why am I being apprehended?" as she attempts to film him. Moments later, Encinia aggressively opens Bland's car door, draws his stun gun and repeatedly yells at her to "get out of the car" while threatening to "light [her] up" for not putting out a cigarette she was smoking.

​After Bland exits her car, she continues recording Encinia. Her recording captures no actions that could be construed as a threat to Encinia's safety, as he claimed at the time.

"My safety was in jeopardy at more than one time… I had a feeling that anything could've been either retrieved or hidden within her area of control. My primary concern was with that purse, with her console, as far as being any kinds of weapons or drugs," Encinia said at the time.

However, the footage Bland captured makes it glaringly clear that she didn't reach for anything in the car during their encounter, as she was using her hands to hold her phone to tape Encinia. In fact, it appears the opposite, with Bland's life the one in danger.

After Bland exits the car, Encinia demands she get off her phone, while still pointing the stun gun at her.

"I'm not on the phone. I have a right to record. This is my property," Bland responds, which reveals that Encinia knew at the time that he was being recorded by Bland.

The end of the video from Bland's point of view shows her filming the ground and her feet, before she abruptly stops recording. Footage taken from Encinia's dashboard shows her putting her phone down on her car before the video ends.

Following the incident, Bland's family filed a wrongful death suit against Waller County and the Texas Department of Public Safety (DPS), reaching a $1.9 million settlement in 2016.

In January 2016, a grand jury charged Encinia with making a false statement on Bland's arrest report, which could have earned him up to one year in jail. However, the charge was later dropped when he promised to surrender his law enforcement license and "not pursue or engage in employment, in any capacity, with law enforcement," Sputnik previously reported.

The Investigative Network also released a video showing Bland's family and their attorney, Cannon Lambert, watching the cellphone footage for the first time.

"Open up the case, period," Shante Needham, Bland's sister, tells Brian Collister of the Investigative Network, also stating that they believe the video was purposefully withheld by Texas DPS officials because "they have an extremely, extremely good cover-up system."

"[The video] not only shows that [Encinia] lied, but that he really had no business even stopping her, period," Needham added. "And at the end of the day, he [Encinia] needs to go to jail."

Lambert was also shocked, his eyes tearing up as he said, "I've never seen that… How is this possible?"

The video was discovered on Bland's phone by the Texas Rangers and the FBI two months after Bland's death. However, they didn't notify Bland's family or lawyer of their findings.

Texas DPS officials have refused to conduct any on-camera interviews since the release of the video Monday and did not respond to Sputnik's request for comment. However, they claim that the video was not intentionally withheld.

"The premise that the video was not produced as a part of the discovery process is wrong," DPS said in a statement to multiple news sources. "A hard drive containing copies of 820 Gigabytes of data compiled by DPS from its investigation, including the dashcam videos, jail video footage and data from Sandra Bland's cell phone, was part of discovery."