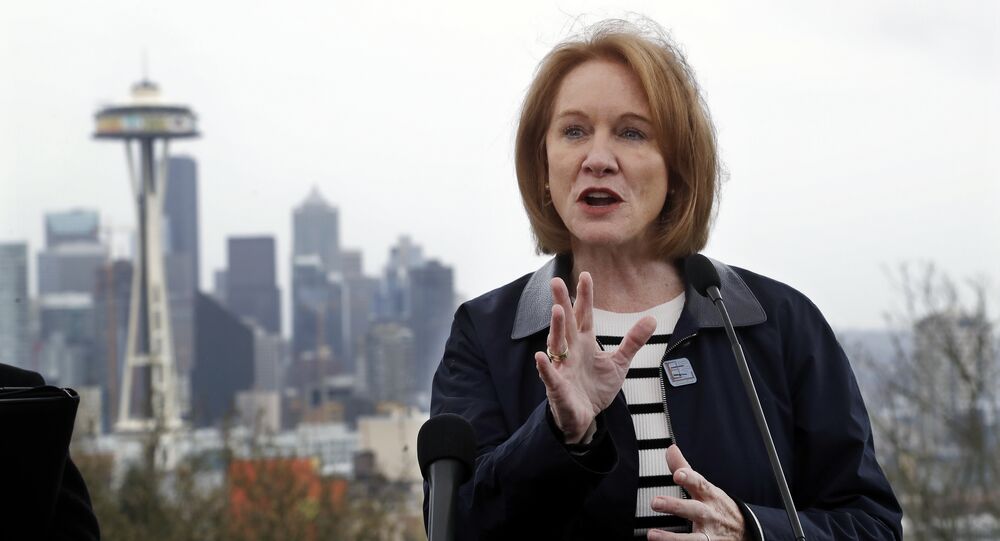 Seattle Mayor Jenny Durkan responded in writing to US President Donald Trump’s Friday tweet that threatened to place undocumented migrants in US sanctuary cities by noting that Seattle is - unlike the nation’s current commander in chief - “not afraid of immigrants and refugees.”

"Here's a message to President Trump: Seattle is not afraid of immigrants and refugees," the mayor stated in her op-ed article.

"In fact, we have always welcomed people who have faced tremendous hardships around the world. Immigrants and refugees are part of Seattle's heritage, and they will continue to make us the city of the future," Durkan wrote in a Washington Post op-ed Friday.

"What does scare us? A president and federal government that would seek to weaponize a law enforcement agency to punish perceived political enemies," she said, adding that Trump is acting like "a would-be despot who thinks the rule of law does not apply to him."

The popular west coast US city boss also noted that Trump "is demonizing immigrants and refugees to incite fear and to distract the American public from his own failures."

On Friday, Trump tweeted that he is considering sending undocumented migrants to sanctuary cities "due to the fact that Democrats are unwilling to change our very dangerous immigrant laws."

​"The Radical Left always seems to have an Open Borders, Open Arms policy — so this should make them very happy!" Trump tweeted.

​Durkan was quick to point out how immigrant and refugee communities in Seattle contribute to the city.

"In Seattle, we know that our immigrant and refugee communities make our city a stronger, more vibrant place. Our immigrant neighbors make up more than 18 percent of our population, and 21 percent of our population speaks a language other than English at home. They create businesses and jobs. They create art and culture. They help teach our kids, serve in law enforcement and the military, and lead our places of faith," Durkan wrote.

"Contrary to what this president thinks," she asserted, "in Seattle, we have strong American values of inclusiveness and opportunity. Instead of threatening immigrant families and the cities that welcome them, this president should spend a little bit more time trying to learn from us."

"Nobody thinks that this is the ideal solution," Sanders told Fox News Sunday, spinning the idea as a bipartisan win. "Whether or not it moves forward — that's yet to be determined."

In a Saturday tweet, Trump suggested that his plan to send migrants and refugees to sanctuary cities would intimidate Democrats into changing their approach to US immigration "fast."

"Democrats must change the Immigration Laws FAST. If not, Sanctuary Cities must immediately ACT to take care of the Illegal Immigrants — and this includes Gang Members, Drug Dealers, Human Traffickers, and Criminals of all shapes, sizes and kinds. CHANGE THE LAWS NOW!" the president frantically tweeted Saturday.

​In March, Trump declared a national emergency and requested $32.5 billion for border security in fiscal year 2020, including $8.6 billion for building sections of his promised border wall. Trump insisted that the wall was needed to prevent criminals and terrorists from crossing into the United States, Sputnik previously reported.

Most recently, Trump has threatened to impose tariffs on Mexican cars imported to the United States if Mexico does not deter US-bound undocumented migrants from crossing through its territory, and has also threatened to close the southern border, according to a Sputnik report.

Can Trump and Congress Find Common Ground on Immigration?