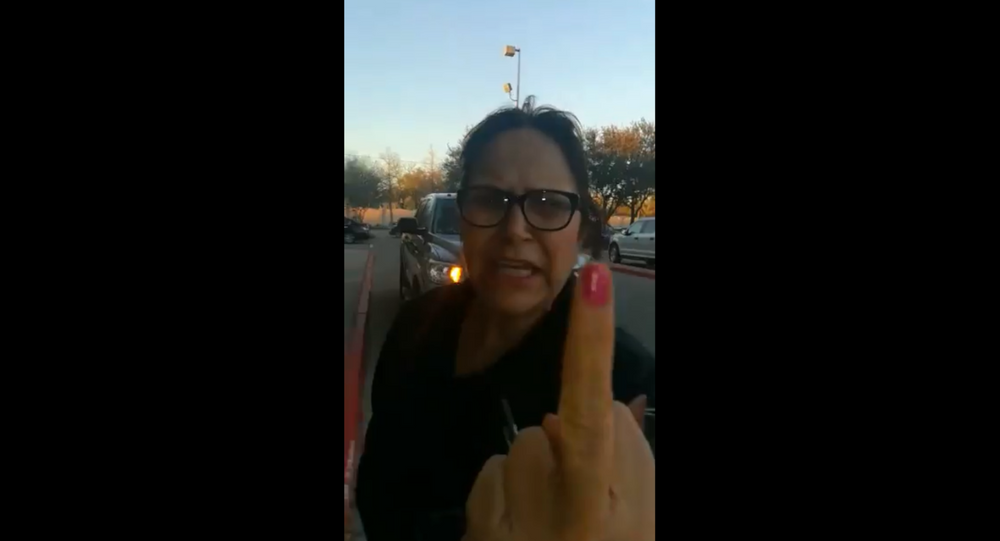 WATCH: US Woman Tells Shopper to ‘Get the F**k Back to Your Country'

Mai Mohamed was minding her own business over the weekend when a woman exiting a Kroger grocery store in Houston, Texas, suddenly decided to treat her to an expletive-filled rant.

The incident reportedly unfolded on Sunday when an unidentified woman began to stare Mohamed down in the Kroger's parking lot while making remarks that she looked "ugly." Fatima Loughlin-Saleh, Mohamed's friend, who shared the footage on Facebook, recently told Yahoo Lifestyle that her friend was wearing a "very Westernized outfit" with a hijab at the time.

With the woman's remarks growing increasingly offensive, Mohamed eventually walked back to her car to get her phone. She began recording the series of events after the woman had already started unleashing insults.

Mohamed responded to the verbal attack by telling the woman to "shut up" and that she was going to share the footage on social media, which prompted another outburst. Mohamed was born in Egypt, but migrated to the Houston area in 2017.

"Piece of s**t, look at her," the woman tells a Kroger employee who comes onto the scene. "This lowlife needs to go back to her f**king country."

With the woman having walked away from the scene, Mohamed discusses the encounter with the employee, who responds by informing her that she needs to turn her phone off and that she "can't use that on the web." He later walks away, leaving Mohamed talking to herself.

Mohamed told the Houston Chronicle on Monday that she ended up returning to Kroger to speak with a manager about the possibility of filing a complaint over the altercation.

"I felt hate when she looked at me," she said of the verbal attack. "I don't know why."

Sparkle Anderson, a spokesperson for Kroger, told the Chronicle that the company is unaware of what exactly caused the incident, and that the employee seen in the recording, who turned out to be a store manager, was trying to resolve the dispute.

It's unclear if the company is planning to speak with the employee to investigate the matter further. Sputnik has reached out to Kroger for further detail, but the chain has not responded.

For the time being, Loughlin-Saleh told Indy100 that Mohamed has no intention "to go shopping alone [in the] near future." She added that Mohamed "was surprised to be a victim of bullying" and that the store manager appeared to be "more concerned with his coffee than helping Mai."

Mohamed is currently working with Arsalan Safiullah, a civil rights attorney with the Houston office for the Council of American-Islamic Relations, on exploring her legal options. A formal complaint has not yet been filed. "Right now, we're just trying to look at all the facts," Safiullah told the New York Post.