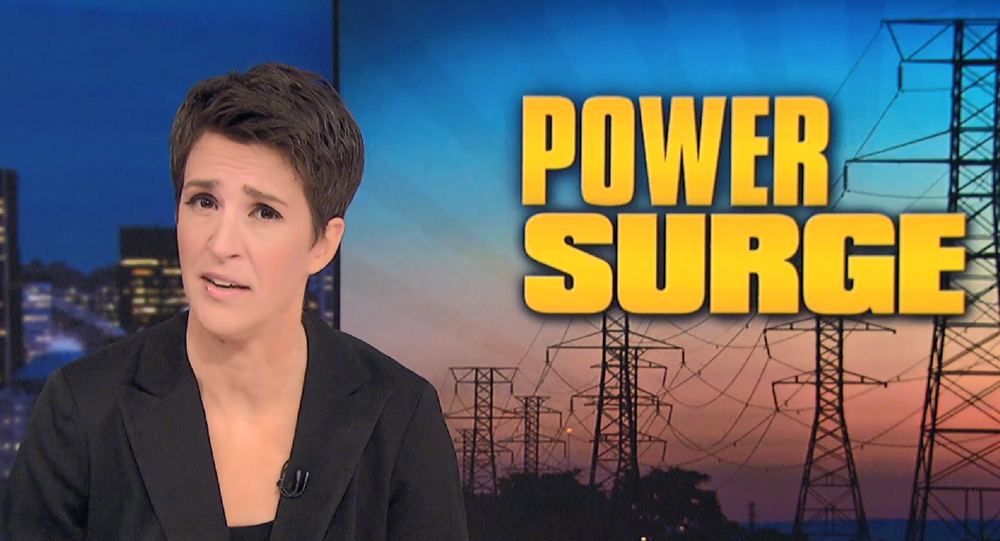 With the polar vortex plunging temperatures in the continental US to Antarctic lows, losing heat could be a matter of life and death. Never one to miss a trick, MSNBC’s Rachel Maddow took the opportunity to remind viewers to be afraid of Russia as they hunker down around the heater.

© AP Photo / Raytheon Antarctic Services, John Feaney, HO
‘Life-Threatening Cold Air’: Polar Vortex to Engulf US Midwest, Great Lakes Region (PHOTOS)
Disrupted polar weather patterns have pushed Arctic air down across much lower latitudes than it normally reaches, plunging the northern US into a deep, life-threatening freeze. Chicagoans have redubbed their city "Chiberia" as wind chills approach minus 50 degrees Fahrenheit, colder than some parts of Antarctica or Mars. Experts have warned that frostbite is possible in as little as 10 minutes of exposure to that kind of cold, and people are cautioned not to directly breathe the cold air, as it could damage their lungs.

However, when it comes to warning Americans about safety dangers, some people only have a hammer, so everywhere they look they see nails. MSNBC's Rachel Maddow's hammer is Russophobia, so when it came to the Antarctic conditions thrust upon the US Midwest, who did she turn to for fear-mongering? Why, Russia, of course!

You'll never guess who is seizing on life-threatening cold weather in the U.S. to fear-monger about… Russia! pic.twitter.com/deo2H4SBBQ

​When Scottish poet Robert Burns wrote about "autumn wild and winter rude," this is NOT what he meant!

The report Maddow cites is from US Director of National Intelligence Dan Coats, who told Congress earlier this week that the US was falling behind Russia and China in its cyberwarfare capabilities.

"Russia has the ability to execute cyber attacks in the United States that generate localized, temporary disruptive effects on critical infrastructure — such as disrupting an electrical distribution network for at least a few hours — similar to those demonstrated in Ukraine in 2015 and 2016," the report, which Coats presented to a Senate panel, reads.

Of course, the identities of those behind that attack in Ukraine were never proven, although some US lawmakers took some of the lessons of that experience to heart last month in drawing up a law to implement some "retro" protections for US power infrastructure. The attack in Ukraine shut down engineers' ability to electronically close opened circuit breakers, and power was restored once they went out and turned them back on manually, Sputnik noted.

"And it is like negative 50 degrees in the Dakotas right now. What would happen if Russia killed the power in Fargo today? What would happen if all the natural gas lines that service Sioux Falls just poofed on the coldest day in recent memories, and it wasn't in our power whether or not to turn them back on?" Maddow said.

Now granted, Midwest gas demand did surge by about 50 percent Wednesday, according to Bloomberg. Prices reached a seven-week high, but experts told that publication that they're equipped for this kind of demand, since intensely cold weather in winter isn't exactly a foreign concept to those who live in the Dakotas and the Great Lakes region.

Maddow's frightening imagery is a far cry from the DNI's warning that US infrastructure is, theoretically, vulnerable. As one journalist pointed out, she's approaching a Glenn Beck-level of paranoid fear-mongering and connecting of dots that simply aren't there.

© AP Photo / Chuck Burton
Fake Math: MSNBC’s Maddow Milks False Russiagate Stories Despite Facebook Data
Maddow has undergone something of a transformation — it was only in 2012 that she authored a book called "Drift: The Unmooring of American Power," about how the US state has become an increasingly undemocratic war machine — and now she's out there making sure that Americans don't forget, for even one second, that they need to be afraid of Russia, a country the US has explicitly stated it's engaged in "inter-state strategic competition" with, by citing the DNI's report about all the ways the US needs to ostensibly "protect itself" from Russia and China.

Hannity is both more watchable and more coherent than Maddow at this point. That's not a compliment to him, he's grown more unhinged and slurred over the last two years. https://t.co/l4zGAlLsQs

​We hope her next report back is about how well tinfoil hats cut wind chill.