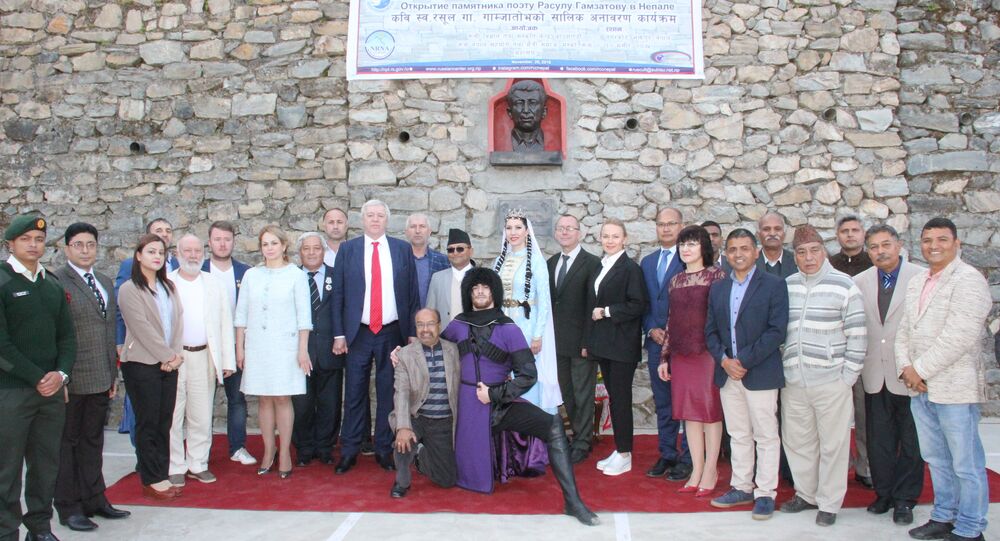 MOSCOW (Sputnik) - A bust of prominent Dagestan's poet Rasul Gamzatov, who was one of the most popular poets of the Soviet era, was unveiled in Nepal, Yulia Androsova, the director of the Russian Centre for Science and Culture in Kathmandu of the Russian foreign cooperation agency (Rossotrudnichestvo), told Sputnik on Monday.

On Sunday and Monday, solemn events devoted to the 95th anniversary of the famous poet organized by Rossotrudnichestvo were held in Nepal.

"The bust of Rasul Gamzatov was unveiled by the poet's nephew, Gamzat Gamzatov, who is the acting permanent representative of the Republic of Dagestan at the Kremlin, Ganesh Prasad Timilsina, the chairman of the National Assembly of Nepal's Federal Parliament, and Charge d'Affaires of the Russian Federation in Nepal Yuri Ivanovich Yuzhaninov," Androsova said.

She added that poet's frequent trips to Nepal were the reason the bust was placed there.

"The choice of the site for the bust's establishment in Nepal — the mountain village of Nagarkot — also was not random. The poet has visited it several times, from that site he used to enjoy the Himalayas, which inspired him," Androsova revealed.

Gamzatov died in 2003 at the age of 80. He was one of the most award-winning poets of the Soviet Union, having received the State Stalin Prize, the Lenin Prize and the International Botev Prize in his lifetime.