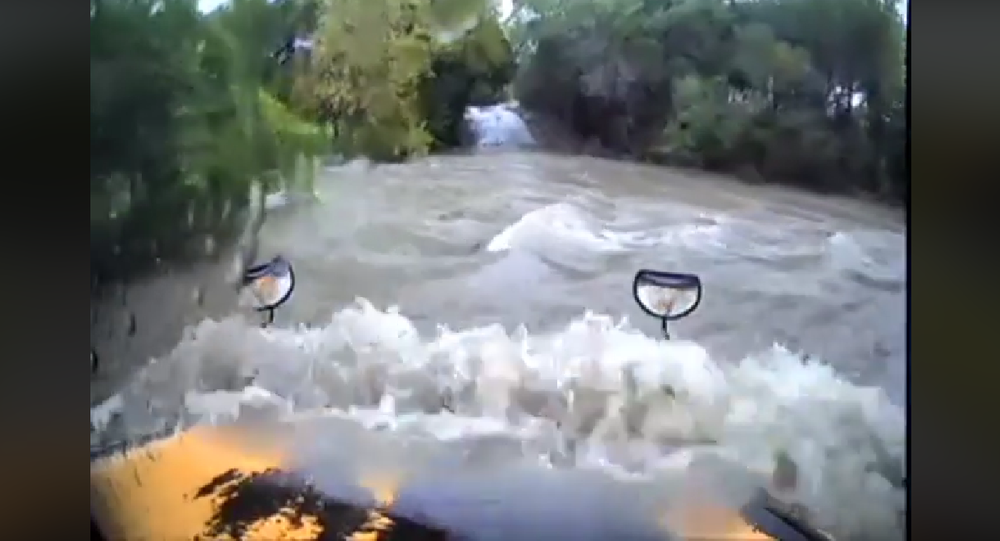 US Bus Driver Tries to Cross Flood, Is Swept Away With Child On Board (VIDEO)

A Leander, Texas, school bus driver was arrested this month after video from the bus’ dashboard camera released by police showed it entering a flood crossing and then being swept away by fast moving floodwaters before getting stuck in a clump of trees.

The video shows 57-year-old Nathan Deyoung, a bus driver with Leander Independent School District, driving over a low-water crossing by going around a barricade the morning of October 16, drifting down a flooded creek for a couple of minutes, before getting washed off the road and stopped by trees, with water up to its hood. Just one student, identified as Jason, was on the bus at the time.

Deyoung and the student were rescued and did not suffer any injuries, according to multiple reports. The Leander Independent School District also confirmed that Deyoung had been fired following the incident.

"The Leander Police Department has elected to release a portion of the forward-facing video from the bus in an effort to illustrate the dangers of attempting to drive across a low-water crossing during flood conditions," the police department wrote on Facebook Friday.

The child's mother, Ashley Ringstaff, who posted about the incident on her Facebook page, said that she got a call from Jason in "hysterics" on October 16.

"[He was] telling me he loves me and that he is scared and thinking he was going to die. I hope no one ever has to listen to their child or loved one preparing to die because of a stupid decision that should of never have happened. I finally understand the feeling of being numb and in shock," Ringstaff wrote on Facebook.

"This whole scenario could have been prevented," Ringstaff told Sputnik Tuesday.

"It was a horrible choice to make, especially with a child on the bus. I'm grateful for the outcome and that my child made it out safely. I'm grateful to the first responders on scene for getting my son back to me and keeping me up to date during the entire rescue process," she said, also adding that her son is "moving forward as best as he can" following the traumatic incident.

According to the Leander Police Department, Deyoung was arrested and charged with endangerment of a child and failure to follow warning signs. He was eventually released on a $10,000 bond. Sputnik's attempts to contact Deyoung were unsuccessful.