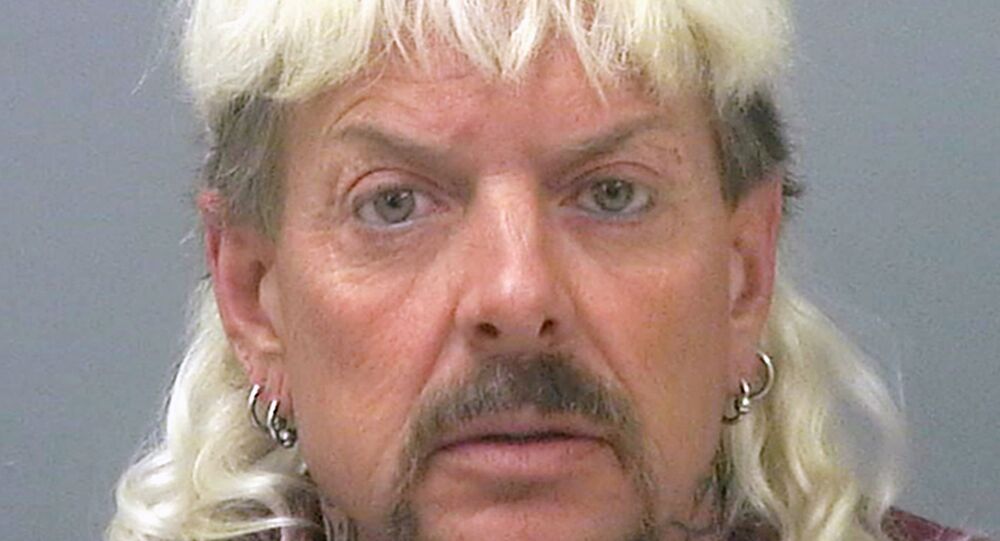 Joseph Maldonado-Passage, a controversial zookeeper also known as Joe Exotic, was indicted on Friday by the US Department of Justice (DOJ) for two counts of hiring a hitman to murder a Florida sanctuary founder.

"Maldonado-Passage gave the unnamed person $3,000 to travel from Oklahoma to South Carolina and then to Florida to carry out the murder. He allegedly agreed to pay thousands more after the deed. The indictment alleges Maldonado-Passage caused the person to travel to Dallas to get fake identification for use in the plot. According to the indictment, the person traveled from Oklahoma to South Carolina on November 26, 2017," the DOJ wrote in statement Friday.

"In a second count, the indictment alleges that beginning in July 2016, Maldonado-Passage repeatedly asked a different unnamed person to find someone to murder Jane Doe in exchange for money. The second person put Maldonado-Passage in contact with an undercover FBI agent. Maldonado-Passage met with the undercover agent on December 8, 2017, to discuss details of murdering Jane Doe," the statement added.

Although the DOJ identified Maldonado-Passage's target as "Jane Doe," Carole Baskin, founder of an animal sanctuary called Big Cat Rescue in Tampa, Florida, claims that she is "Jane Doe." In a video on her organization's website, Baskin claims that Maldonado-Passage threatened her multiple times online over the years on his YouTube channel, JoeExoticTV.

Big Cat Rescue even posted a video of Exotic shooting a blow-up doll that looks like Baskin on Facebook Friday.

​"I was surprised he didn't want to do it himself," Baskin told local outlet News 9 Sunday.

Maldonado-Passage used to own the Greater Wynnewood Exotic Animal Park in Wynnewood, Oklahoma, which was formerly called the G.W. Exotic Animal Memorial Park. In 2016, Jeff Lowe bought the park and took over as CEO. However, Maldonado-Passage remained on staff as an "entertainment director" until last summer, the Huffington Post reported Saturday.

​The zookeeper gained national attention when he decided to run for US president in 2016 as an independent candidate, using his YouTube channel to post his thoughts about the election. Last year, he also ran for Oklahoma governor and finished third in the state's Libertarian primary.

Maldonado-Passage and Baskin have historically had a vexed relationship. On the Big Cat Rescue website, Baskin has repeatedly accused Maldonado-Passage of animal mistreatment. According to Baskin, Maldonado-Passage ran "one of the most notorious cub petting roadside zoos" in the country and "operated as a traveling exhibit," bringing big cat cubs to malls throughout the Midwest and Southwest, which created "miserable" lives for the animals.

In addition, Baskin sued Maldonado-Passage in 2011, claiming that he was displaying his traveling exhibit with the name "Big Cat Rescue Entertainment" to trick people into thinking it was associated with Big Cat Rescue. He was ordered by a judge to pay Baskin $1 million, according to a Monday report by the Tampa Bay Times.

The Wynnewood zoo was also criticized by animal advocacy groups like the Humane Society of the United States and People for the Ethical Treatment of Animals, who accused the zoo of allowing children to handle and take photos with juvenile tigers in what they described as "a petting zoo for carnivores."

If Maldonado-Passage is found guilty of plotting murder-for-hire, he could be face prison time of up to 10 years.

Animal Selfies and the New Cutting Edge of Civil Rights