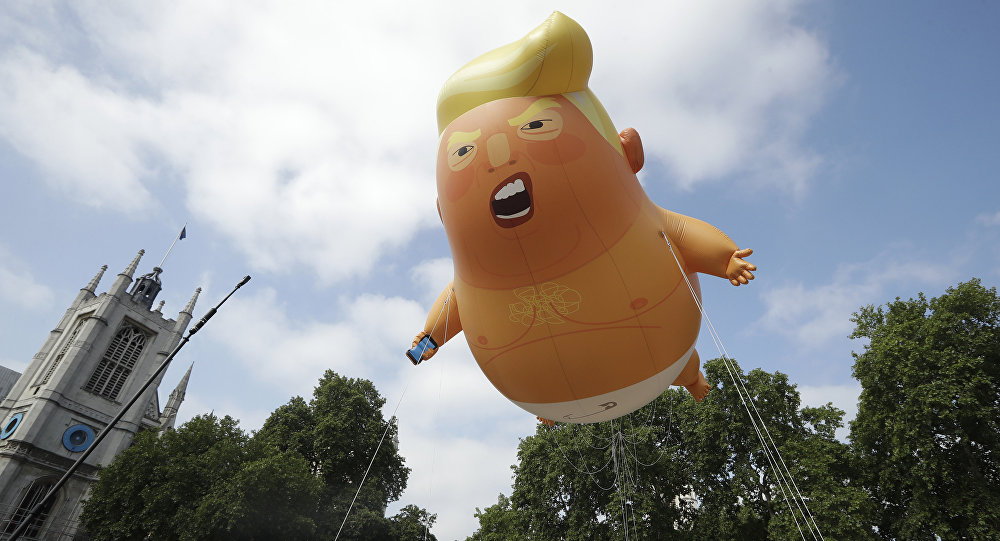 A blimp depicting US President Donald Trump as a screaming baby may fly over Australia this year during Trump's visit with Australian Prime Minister Malcolm Turnbull. The blimp debuted over London a couple of weeks ago.

Although no official date for the talk between Trump and Turnbull has been set, the American leader is expected to visit Australia some time after the Asia-Pacific Economic Cooperation summit in November, the Guardian reported Tuesday.

Australian organizer Simone White told the Guardian that the planned protests against Trump's visit, called United Against Trump, were inspired by the tens of thousands of people who marched through the streets of London a couple of weeks ago to protest his visit with UK Prime Minister Theresa May and Queen Elizabeth II.

"The Trump baby blimp has become this kind of globally recognized symbol of opposition to Trump," White said.

"We have been in touch with the people that made the blimp, and they are actually really keen to have it travel around the world. They're excited to get the blimp to Australia. Now we're just in the process of figuring out how to send it, which won't be too hard," White continued.

"We're expecting an absolutely enormous protest. We are expecting this could be one of the biggest protests in Australia in a long time. Our goal, like the goal of the protesters in the UK, is to make Trump feel like he is not welcome here."

David Shoebridge, an Australian politician who has been a Green Party member of the New South Wales Legislative Council since September 2010, told the Guardian that Trump's potential visit could have political consequences in the country.

"Australians can already feel the echoes of Trump and his politics on our political system," he said. "Trump not only symbolizes, but actually works to produce, a mean, nasty, violent world that is riddled with racism and misogyny. If you don't protest that, what do you stand up against?" Shoebridge said.

"To date, Turnbull has cuddled up to Trump. If he continues down that path, I believe he will pay a very real domestic political price for it," Shoebridge added.

The balloon, which depicts Trump as a baby in a diaper, was created by a UK activist group that crowdfunded more than $44,000 to create the 20-foot inflatable likeness.

Last week, a New Jersey activist Didier Jimenez-Castro set up a GoFundMe page titled "Fund to Bring Baby Trump to America" for future protests at Trump's National Golf Club in Bedminster, New Jersey. So far, 1,059 people have raised $23,693 for the Trump blimp in 10 days, far surpassing the original goal of $4,500.

'Tariffs Are the Greatest': Trump Threatens to Hit Trading Partners With Duties