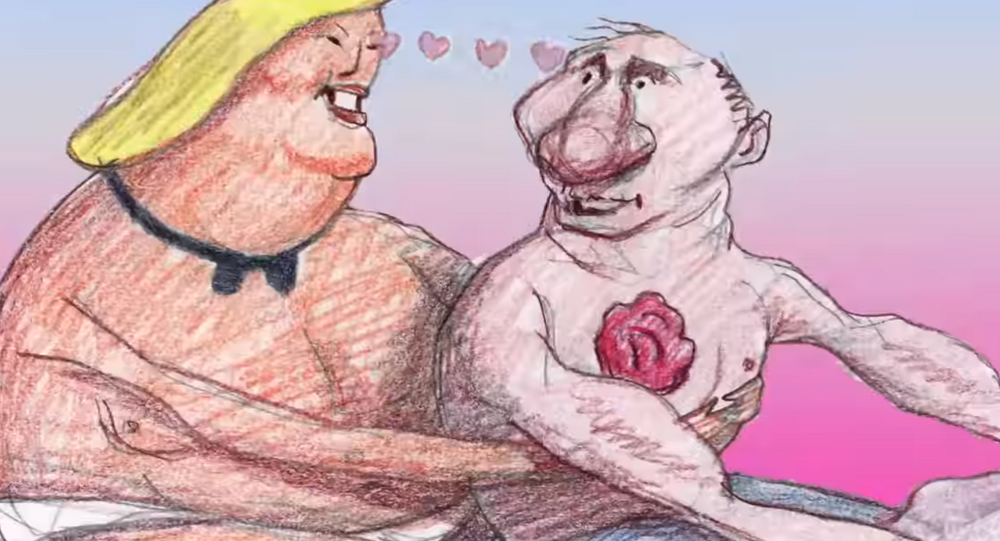 A New York Times satirical cartoon depicting US President Donald Trump and Russian President Vladimir Putin as if they were engaged in a sexual relationship was deemed homophobic by netizens on Monday.

The cartoon, which was originally released some three weeks prior as a three-part series, was re-released ahead of the Monday summit between Trump and Putin in Helsinki, Finland.

"Donald Trump's not-so-secret admiration for Russian President Vladimir Putin of Russia plays out in a teenager's bedroom, where the fantasies of this forbidden romance come to life," the Times states in an opinion piece. "The video cartoons riff on Mr. Trump's absurd utterances to illustrate the president's tumultuous inner life of paranoia, narcissism and xenophobia."

​It shows Trump going about a pre-date ritual, using some breath spray, coiffing his hair and fixing his tie before Putin's arrival causes 45's heart to begin fluttering. The clip, just over a minute long, later depicts Trump pinching Putin's nipples as they share a kiss atop a unicorn.

Hours after resharing the June 25 cartoon, The Times was called out over its decision to use the LGBTQ community to push its joke.

​But not everyone is cancelling their subscription to the Times just yet.

​Although it was tweeted prior to the Times' cartoon share, netizens have also deemed former presidential candidate Hillary Clinton's recent tweet in which she questioned what "team" Trump played for as "coded homophobia."

© REUTERS / Steffen Kugler/Courtesy of Bundesregierung
'Maybe They Went to Toilet Together': Lavrov Jokes About Hypothetical 4th Putin-Trump Meeting in Germany

And this isn't the first time that the Times has made a joke about Trump and Putin catching the love bug. A 2017 column by Frank Bruni titled "Donnie and Vlad: A Love Story" compares Trump and Putin to Romeo and Juliet and calls the relationship "gross."

The Times, of course, isn't the first publication to make such jokes, nor will it likely be the last. Just a few months ago, both late night talk show host Jimmy Kimmel and comedian Chelsea Handler came under fire for their respective uses of homosexuality as punchlines.

​The two TV personalities had been engaged in a long feud in which Hannity repeatedly used the insult "a*s clown" as a dig at Kimmel, according to Mic. Kimmel had also suggested that Hannity and Trump had sex with each other.

Handler, on the other hand, doubled down on her antics, which suggested that Trump and Putin were together and that US Attorney General Jeff Sessions "is definitely a bottom." When an eyebrow-raising netizen called out Handler for the poor joke, she responded by saying that she was "a bottom, and I'm proud of it." Others quickly stressed that Handler was deflecting and that 43-year-old comedian simply wasn't comprehending why her statements were damaging.

Guy Branum, a stand-up comedian, explained to Mic that both Handler and Kimmel were playing into a "go-to joke" that comedians tend to rely on.

"They don't really think about the construction of homosexuality they're making," Branum told the website. "They don't think about the way it reflects on actual gay people. And I think it's just reflective of the fact that comedy, for such a long time, has treated gay people as a frequent object, but has very few actual gay voices within it."

"You can do better than this," Chang said. "You can make a better joke than shitting on some group of people. You are a better comedian than that. Hopefully things like this shift the conversation in a positive way."