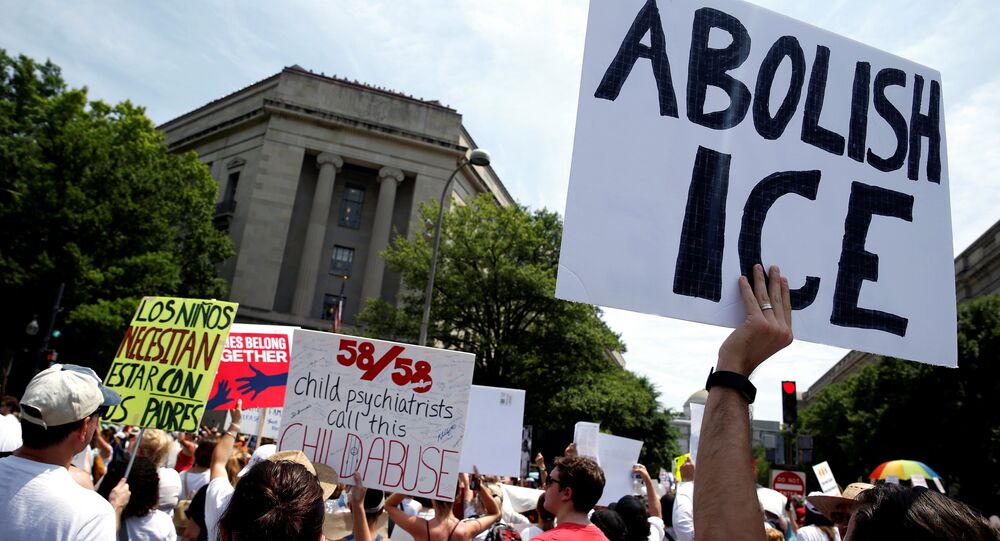 A church in Indianapolis, Indiana, is displaying statues of Mary, Joseph and baby Jesus in a cage on the Christ Church Cathedral’s front lawn to protest US President Donald Trump’s “zero tolerance” immigration law, which has resulted in the separation of immigrant families at the US’ southern border.

"When I read the stories of the Holy Family in scripture, they were in the middle of some pretty heated things," Christ Church Cathedral Dean Stephen Carlsen recently told RTV6.

​"They had to flee for asylum in Egypt," Carlsen said of the Holy Family. "The powers of the day were threatening and indeed killing people in Jesus' day. They were a homeless family with nowhere to stay. I think our faith tells us where we need to be."

"What's controversial is that we are turning away from the values that should be guiding us. The point of a religious icon is to move our hearts, and if at first people are upset by it, that might just be God trying to move their heart. And I hope their hearts soften.'"

​In April, the US Department of Justice announced its zero-tolerance policy, promising to pursue criminal charges to the fullest extent of the law against those who cross the US-Mexico border without correct documentation.

Almost 2,000 immigrant children were forcibly separated from their parents between April 19 and May 31, prompting harsh criticism from rights groups and lawmakers from both the Democratic and Republican parties.

​Last Wednesday, Trump — following significant political blowback from the wildly unpopular practice of separating children, including infants, from their parents — signed an executive order that purportedly stopped the separations.

However, the Trump order only directed US Attorney General Jeff Sessions to seek changes in the 1997 Flores v. Reno ruling in order to detain children longer.

​Under the agreement, the US cannot hold immigrant children for more than 20 days even if they are with their parents. However, according to the settlement, the Trump administration is "forced" to separate children from their parents because once parents have been criminally prosecuted for illegal entry, the children have to be sent to the US Department of Health and Human Services as "unaccompanied immigrant children."

In a statement provided to media, Carlsen said, "Last evening we revealed our #EveryFamilyIsHoly campaign, designed to bring awareness to the humanitarian atrocities from our nation's ‘zero tolerance' immigration policies on the border and here in Indianapolis."

Has the Media Gone Collectively Insane with their Immigration Coverage?

Why Ending Family Separation Will Not Fix America's Immigration System