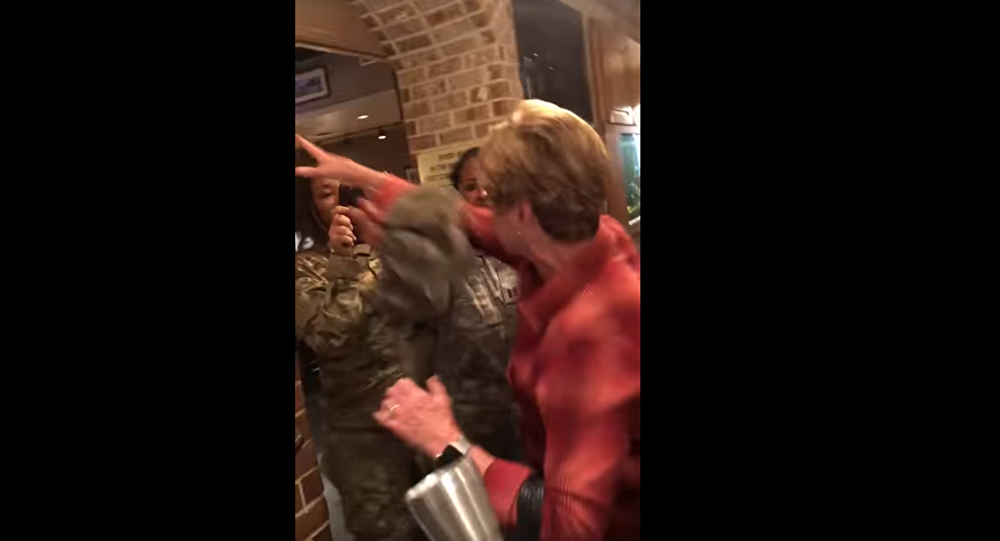 A 72-year-old woman was arrested after she was captured on camera assaulting two female black soldiers, one of whom was pregnant.

The shocking video shows the altercation between Judy Tucker and two soldiers at a Cheddar's restaurant in Macon, Georgia, on Saturday night.

The witness who posted the video of the incident, LaKeycia Ward, said that the dispute began when Tucker and her son, Robbie, became enraged that two soldiers drove around their car as Tucker and her family were attempting to park in a handicapped spot. Tucker's husband is allegedly handicapped but was not captured in any of the video footage.

​"This gentleman & his mom [were] hostile about the two soldiers not waiting for them to reverse back into [their] handicap parking spot for her handicapped husband instead they went around and proceeded to park in [their] own separate parking spot," Ward captioned in the YouTube video she uploaded Sunday.

According to Ward and other witnesses, Tucker and her son followed the soldiers inside the restaurant and started calling them "gay black b*****s" and yelling "does the military let lesbians serve?" Tucker is then taped getting angrier when one of the soldiers pulls out her phone to record the incident.

"Put that phone down! You do not have the right to take a picture of me!" Tucker yells, and she and Robbie attempt to snatch the phone from one of the soldiers, pushing her in the process.

"First of all, look at me! I'm pregnant. Look at me — You're pushing a pregnant lady," one of the soldiers is heard saying.

"Oh really? By her?" Robbie replies.

Additional footage captured outside the restaurant shows Tucker crying while being arrested as Robbie and her daughter, Angie, stood by her side. It is unclear where Angie was during the altercation inside the restaurant as she does not appear in the video footage.

Tucker was arrested on simple battery charges and booked in Bibb County Jail. She was eventually released on a $650 bond.

"We were appalled by the behavior of the individuals who confronted the two female service members. Such behavior flies in the face of our values and those individuals are no longer welcome in our restaurant," Cheddar's corporate office wrote in a recent statement to WMAZ.

Tucker's art restoration Facebook business page has been flooded with comments by people appalled with her behavior following the incident.

"How dare you abuse and harass our soldiers in uniform!!! Especially a pregnant one. You and your son have absolutely no class and should be utterly ashamed of yourselves," one Facebook user wrote.

"Thank you for showing your hate. I'm sure you will lose customers for this and your business will soon close… I'm glad you were arrested for being disrespectful and also being a racist to the people who serve and provide protection for this country," another user added.