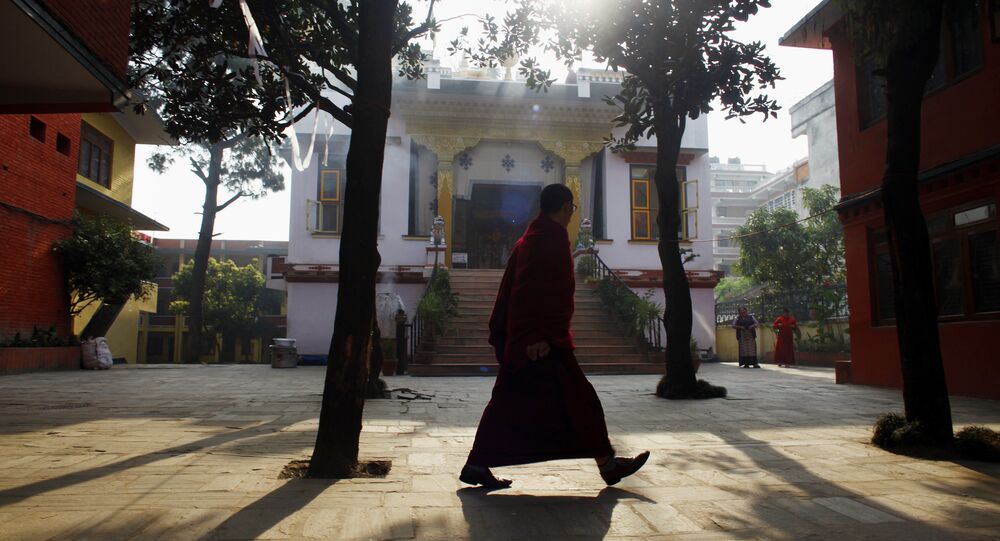 Tibetan monks seem like ethereal beings always composed and at peace with themselves. They spend their days praying for humanity and learning the ancient sacred Buddhist texts. However, the 21st century and technology that has come with it have touched upon the lives of these monks.

It should come as no surprise that it’s now possible to see a Buddhist monk typing away on a smart phone. Sputnik takes a look at their way of life.

Tibetan monasteries take in pupils at the age of six and by 21 they may obtain the status of a Geelong, an enlightened monk.

Young Tibetans who have embarked on the path of enlightenment are first asked  if there are any circumstances that might prevent them from continuing on this chosen path. If there are none, then the newcomer chooses two teachers: one responsible for teaching the basics of Buddhism, and the other for performing public duties in the monastery.

After that, the future monk gets his hair shorn off, leaving only a small clump in the area of the crown. After the abbot of the monastery approves the acceptance of the novice into the community, his hair is completely shaved off.

© AP Photo / Niranjan Shrestha
A Tibetan Monk wears his hat before performing a ritual at an event held to celebrate the 25th year of the Dalai Lama receiving the Nobel Peace Prize in Katmandu, Nepal. (File)

The diet in the monastery is ascetic: mostly rice and vegetables with Tibetan bread.

The main drink of the monks is Tibetan tea. Tibetan tea includes salt, yak milk and butter. This tea recipe is over 1,400 years old, and despite a very specific taste, Tibetan tea is very nutritious and quenches the thirst.

Such asceticism, according to Buddhists, promotes the triumph of the spirit over the body. The most enlightened lamas can virtually go  without food.

© AP Photo / Ashwini Bhatia
Exile Tibetans march on foot during a candlelit vigil in solidarity with two Tibetans, who exiles claim have immolated themselves demanding freedom for Tibet, in Dharmsala, India. (File)

Some monks, reaching a certain level of spiritual development, may decide to leave the monastery and live away from the rest almost like a hermit. Many leave only for the summer to spend it meditating alone in nearby caves, and during the severe winters return to the monastery.

© AP Photo / Ashwini Bhatia
An exiled Tibetan monk makes a point during a dialectics debate with another monk at the Kirti monastery in Dharmsala, India. (File)

However, there are also those who leave the community for several years.

Despite all the penance, more enlightened monks, lamas, treat the younger monks with understanding if they develop an interest in worldly things.

Mentors often turn a blind eye to the fact that their pupils in their spare time play football or use modern gadgets. The lamas themselves sometimes use smart phones in order to read the latest news.

© AP Photo / Greg Baker
Monk holds a mobile phone and sunglasses at the Jokhang Temple in Lhasa, the capital of Tibet, China. (File)

However, there remain among the Tibetan monks those who live in full accordance with the customs of their ancestors, without the Internet, television and other modern entertainment.

There are legends that suggest that such Tibetan monks know how to go into a deep meditation or trance and stay in it for decades.

To do this, the monks go up into the mountains and voluntarily agree to be immured in small cells, in which there is only enough space for sitting in a lotus pose for meditation.

Once a week they are brought a small portion of food and water, and after a while they stop eating that also. The monks believe that by going into a deep meditation they receive an opportunity to become closer to the Buddha himself.