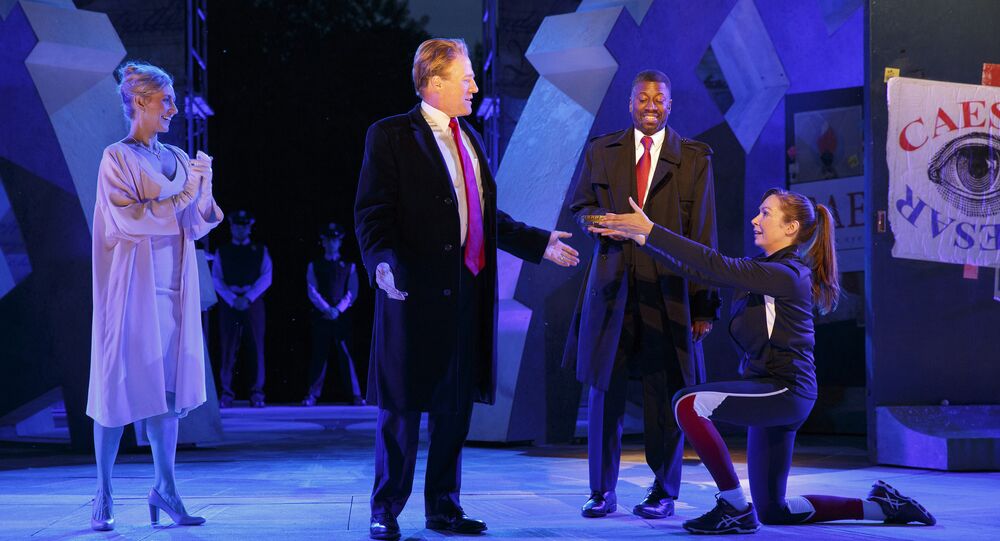 #MakeShakespeareExcitingAgain? Theater companies across the US are apparently getting death threats and other harassing communications because of one New York production of "Julius Caesar" that depicts the Roman emperor as a Donald Trump lookalike.

The New York Public Theater's Central Park production has created a storm of controversy. Their Caesar is "dressed in a business suit, with a royal blue tie, hanging a couple inches below the belt line, with reddish-blonde hair," audience member Laura Shaeffer told a local radio station earlier this month.

Caesar's wife, Calpurnia, has been given a "Slavic accent" and a resemblance to Melania Trump. An American flag hangs over the Senate assassination scene in the play. "They had the full murder scene onstage, and blood was spewing everywhere out of his body," Shaeffer told AM 970 THE ANSWER, Raw Story reports. "It was the on-stage murder of the president of the United States."

And Trump supporters are outraged. Unfortunately, they're not always sure with whom.

"Your play depicting the murder of our President is nothing but pure hatred," one response to the play reads.

"[H]ope you all who did this play about Trump are the first do [sic] die when ISIS COMES TO YOU [expletive] sumbags [sic]," another, more excitable critic wrote.

Both messages were sent to the Lenox, Massachusetts, Shakespeare & Company — which has nothing whatsoever to do with the New York City play.

The Boston Globe reports that the Lenox Shakespeare performers have gotten some 40 hateful messages like those. Shakespeare Dallas (yeah, in Texas) has gotten closer to 80, its Executive Director Raphael Parry told the paper, including rape threats, death threats, and expressions of desire that the theater's staff be killed by terrorists. Theater companies in Washington, DC, have also gotten angry or threatening messages, phone calls and tweets, as have other New York companies.

"Your (sic) a disgrace. You should be ashamed — that is the President. I hope you die and so do you (sic) family," some indignant news consumer wrote to the Texas company, a local CBS station reports.

"We should send all you freaks to ISIS. They would eliminate your stench on this earth with real knives. Just think they hate somebody who doesn't know what bathroom to use," another wrote.

The writer noted that he could "smell your stench all the way to Texas." And here, perhaps, is the problem: poor internet research skills (not to mention poor emotional control). If you're fuming in Texas, for example, and Google "Shakespeare in the park," you'll be shown results for productions of Shakespeare in your local parks, not Central Park.

Those productions are also not "Julius Caesar." In Dallas, instead, you could go see "The Merry Wives of Windsor." In Lenox, "Cymbeline." But the angry #MAGA hordes are apparently too fired up to notice.

Parry sent that email and all the rest to the FBI. He's not taking any chances.

"We just got slammed," he said. "It's pretty amazing the vitriol, the wishing we would die and our family would die. A whole lot of them say that we should burn in hell."

It has been pointed out by a variety of news outlets that "Julius Caesar" is an inherently political play, and is often staged to reflect current administrations. A 2015 performance in Rhode Island had a female Caesar who was murdered in a striking white pantsuit. A 2012 staging in Washington, DC, featured an actor who bore a strong resemblance to former US President Barack Obama.

Nevertheless, the outcry over this production has led Delta Air Lines and Bank of America to withdraw funding from the production.